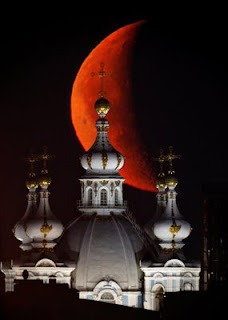 Updated 12 June 2016: The image above of a blood-red moon rising behind Smolny Cathedral in Saint Petersburg, Russia is an Associated Press photograph taken in the early morning of 19 May 2009 by Dmitry Lovetsky. This image certainly appears to bode ill for Russia, and increasingly reminds many eschatology students of the imagery evoked within the text of Revelation 6:12.

Indeed, as an epilogue to Eschatology Today's four-part series 'The Prophetic Road to Revelation" this imagery is an appropriate visual harbinger for the events we know to be imminent. In both chapters of Ezekiel's prophetic description of the War of Gog/Magog we clearly can see the destruction which will soon be visited upon the hordes of the Gog/Magog alliance. The specific nations identified are Russia, former-Soviet Republics of the Caucasus and Central Asia, Iran, Libya and the Sudan. The total population of these nations is a little more than 330 million people. So when the Lord declares in verse 2 of chapter 39 to "leave but the sixth part of thee" and in verse 6 declares He will send fire on the Magog horde homelands, the inference is to the destruction of several hundred million people, leaving only the sixth part, or a few tens of millions of people as survivors.

In verse 10 of the same chapter we read of the people of Israel going forth to "spoil those that spoiled them, and rob those that robbed them." My question here would be to ask how much spoil and robbing of the burnt up and thoroughly annihilated hordes of Gog/Magog can there be aside from using the weapons as fuel for the subsequent seven years, and does this not speak more appropriately to Israel taking yet more spoil (recall the inferred spoils taken as a result of the preceding Psalm 83 war) from the nations of the Gog/Magog confederation?

And also in chapter 39 verses 21, 23 and 27 speak to the effect this destruction has upon the nations of the world. In our age of live image televised satellite coverage the nations of the whole world will see the punishment inflicted upon the Gog/Magog nations, that the nations will know it was the hand of God that was laid upon them.

And finally, in verse 29 ("Neither will I hide my face any more from them: for I have poured out my spirit upon the house of Israel, saith the Lord GOD."), we see what I believe is a grammatical past-tense confirmation that the promised saving of all Israel by the Old Testament prophets and by the Apostle Paul (see Romans 11) will have been accomplished no later than the conclusion of the War of Gog/Magog, thereby and according to Dispensationalists, such as myself, the Harpazo (the Rapture) of the Bride of Christ will have occurred and the Church age will have passed into history, and planet Earth will have arrived on the doorstep of Gabriel's prophecy to Daniel regarding Israel's 70th Week, also known as the 7-year Tribulation or the "time of Jacob's trouble", which concludes with the Second Coming of Jesus Christ and the establishment of His millennial Kingdom.

Ezekiel 38/39 is therefore understood as being a transitional event; a final military conflict which uniquely delineates our world of pre-70th Week prophetic fulfillment from the 70th Week's prophetic fulfillment which culminates in the second coming of Jesus Christ as King of kings and Lord of lords.
Posted by Sean Osborne at 3:10 PM

Thanks. I was just to fiddling around with blogger templates one day and this one caught my eye.

Is this a real picture or has it been fabricated?

As stated above, " The image above of a blood-red moon rising behind Smolny Cathedral in Saint Petersburg, Russia is an Associated Press photograph taken early this morning by Dmitry Lovetsky."

The size of the moon might give one the impression of the image being "photoshopped." However, the size of the moon is due to a common atmospheric phenomenon appearing larger or less distant than they actually are. This commonly occurs with the right conditions during moon rise over the horizon. I have seen the same effect with Mt. Rainier as viewed from Ft. Lewis in Washington State.

The only thing that I can say, seeing the way world events are developing is:"The time is near".

Dear visitor: Are you Rapture Ready?

I got confused at the very end. Are you saying that Gog/Magog kicks off the Tribulation? But then did you also say this was after the rapture?

Yes, Gog/Magog is a major prophetic event that immediately precedes the start of Daniel's 70th Week (the Tribulation), and at some undermined point prior to Ezekiel 39:29 the Harpazo (Rapture) will have occured (i.e. which is to say that Paul's prophecy of Romans 11:25 has been fulfilled.)

Sean, it sounds like according to this article that the church will be around for most of the Gog/Magog invasion is that correct? Thanks

I believe, as stated in the final paragraph, that Ezekiel 39:29 makes clear that the "fulness of the Gentiles come in" and the Lord's pouring out His Spirit upon Israel are very probably concurrent events in close proximity with the start of the 70th Week. I relate Ezekiel 38/39 fulfillment with Revelation 4 at a minimum.

Also, I have to say that I also believe, as do most of us, that the Harpazo is a signless event. Therefore Ezekiel 38/39 cannot serve as a definitive or dogmatic sign of the Harpazo's occurence any more than some other prophetic fulfillment discussed on the blog. The Harpazo could occur at any moment regardless of what is going on on the Earth.

Bottom Line: We are in the season of the "fig tree" so we know that summer is near.

Sean, This will certainly be a power tipping event in the middle east. With Israel being seen as a nation that God intervenes for, do you see this as the event that brings the western Antichrist nations to confirm a military alliance (covenant) with Israel and at this time Israel will build their temple?

We must always be mindful that Israel, prior to the AoD, will have received the Antichrist as their expected 'Moshiach ben David.' Jesus prophesied this will occur in John 5:43. Therefore the government of Israel, led by the Sanhedrin, will gladly accept his confirmation of the covenant (treaty).

Also, at this time the Two Witnesses and 144,000 Jewish evangelists will be performing their short-term ministries.

The temple will be standing and fully functioning at the start of the 70th Week.

Thanks for the follow up. It seems there is so little time left.

Remember, there are at least three previous blog posts regarding Revelation 11, 13 and 17.

In Rev. 11 the chapter opens with John measuring the 70th Week temple. Then the Two Witnesses are introduced. Their ministry and the measuring of the temple occur at the start of the 70th Week, that means they will both exist prior to the start of the 70th Week. And their ministry continues for the next 42 months right up to their death at the hands of the Antichrist, and they are resurrected three and one-half days later back to life before the entire planet. This is concurrent with the Abomination of Desolation taking place.

This will be covered again in the new blog post about the 70th Week.

Sean, I must be blind or dense. I am seeing the clarity of Rev 11 as I'm reading your response. It's one of those popped up side the head moments. Praise God! Thank you for your patients.

No problem, I've done that myself previously also.

This is why this blog exists.