15 December 2013:  As we all know the world is under the full and sovereign control of the LORD God, and His will is being done in all things in these 'last days' prior to the advent of His Everlasting Kingdom. With this as our benchmark, it's time once again to come up to periscope depth. However, this time we're not going to necessarily take a look around at trends toward future events, but at a trio of items which are going on right here and now. Some of this unvarnished truth you might already be aware of, some of it not so much, or some of it never before. Whatever the case we all know that Jesus is Lord and He is coming soon! Marana'tha!

Nelson Mandela (boo, hiss) was big time in the news from his recent death nine days ago to his burial this morning in Qunu, South Africa. The corporate global media (which will soon be singing the praises of the Antichrist) was the vehicle by which the unwarranted praises of this man were sung with all of the revisionist historical aplomb and deception they could muster. Portrayed by them as a sainted martyr of the global community, he was in all actuality a world-class terrorist ("Winnie's Necklace") and communist revolutionary. He fought and labored not for the freedom of his fellow man, but for the enslavement of mankind under world communism. He held in the highest esteem and brotherhood people such as Fidel Castro, the communist enslaver of Cuba, and Yasser Arafat, the embodiment of Arab hatred of and wannabe destroyer of Israel. Nelson Mandela, truth be told, utterly despised the United States of America and our Constitution. He did not serve God, he served the father of lies. Despite the glowing priase of the corporate global media, Nelson Mandela's eternity is assured in a different venue.


The Islamic Republic of Iran walked out of the continuing nuclear discussions in Geneva this past Friday. I think this is a good thing and they should not be allowed to return as there is nothing good to be achieved from negotiations with islamic jihadists and apocalyptic terrorists. Aside from this, Seyed Hossein Mousavian, a former senior official in the Ayatollah's Surpeme National Security Council and close ally of current Iranian President Hassan Rouhani, confirmed during a recent conference in Manama, Bahrain that Iran can construct nuclear weapons "when we want." Tell us something we don't already know Seyed. Seyed Hossein Mousavian has been visiting research scholar at the Program on Science and Global Security within  Princeton University of New Jersey. While Princeton University is fond of heralding Mousavian's role as a former Iranian Ambassador to Germany, they are necessarily tight-lipped about his role as an Iranian regime assassin and murderer during the period of 1990-1997 when Germany forced him to return to Iran. So, why exactly was this miscreant Shi'a terrorist murderer allowed entry into the USA after Barack Hussein Obama's election in 2008?

I am trying to figure out why both Russian President Valdimir "Gog" Putin and Deputy Prime Minister Dimitry Rogozin both issued threats to nuke the United States of America this past week because they think the US will strike them first with conventional weapons via our developing non-nuclear Prompt Global Strike (PGS) system. Do they know something we don't, or is this the thanks we get for President Obama's now-infamous "re-set in relations" with the Soviet Union Russian Federation? Actually, truth be told again, the military and civilian officals of the Russian Federation have consistently and regularly threatened nuclear attack upon the US and our NATO alllies since 2008. Why? Because since Obama became the U.S. President he renounced and went on an international apology tour to disclaim previous U.S. foreign policy only to engage in or threaten illegal wars. Witness the illegal war against Libya (which brought us the fiasco of Benghazi), and he has threatened two others, the most recent against Syria (last fall) and Iran (future - to be determined). And let's not forget the massively expanded drone wars Obama is waging in Pakistan, Somalia and Yemen. It takes two to tango, so the saying goes, and Obama is doing his doggnoned best to provoke a foreign nuclear strike upon the U.S. Preemption is the name of the game in the present age. And also remember, Obama has done his level best to ensure that the U.S. has no allies in any future wars. Rampant spying on your allies is no way to treat your allies. Even Bill Clinton recent excoriated Obama for this insanity. And how Obama has dealt with Israel is enough to make anyone wretch, even the virulent anti-Netanyahu leftist camp at Haaretz who now admit that the U.S. lied to our Israeli allies.

And people wonder why there is no clear cut mention of the U.S. in 'last days' Bible prophecy. We the People have elected and then re-elected this wannabe king, and he's been busy about the business of destroying this country by any and all means at his disposal. Nelson Mandela would have loved Barack Hussein Obama.
Posted by Sean Osborne at 11:12 AM 17 comments:

Psalm 68: A Messianic Prophecy for a Snowy Israel 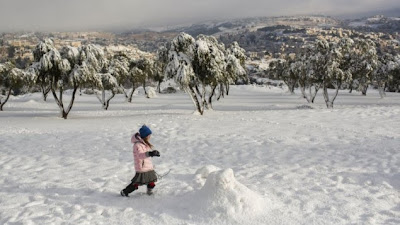 14 December 2013: This girl playing in a snow-covered landscape image was taken in Israel this morning, at that Armon HaNatziv promenade to the south of Temple Mount, Jerusalem. Quite a few out there are attaching some prophetic significance to the snow and wintry weather that has blanketed Israel over the past 48 hours, particularly Jerusalem and other elevated environs.  With end times expectations being what they are in these days, I am inclined to agree that there might well be some significance to an unprecedented snowfall at the end of 2013 AD.

While there is prophetic mention of snow being symbolically linked with the salvation of the human soul, such as found in Isaiah 1:18 ("Come now, let us reason together, says the Lord: though your sins are like scarlet, they shall be as white as snow; though they are red like crimson, they shall become like wool"), there is also Psalm 68 which prophetically declares how God will scatter His enemies in the last days. Verse 14 appears to point to a specific time of year : "When the Almighty scattered kings in it, it was white as snow in Zalmon." Mount Zalmon (a/k/a Mount Ebal) is a mountain in Samaria, near Shechem, the hill country of Ephraim, central Israel. Ephraim figures prominently in the prophecy of Isaiah 17.

A procession of future prophetic verses from King David's point in time begins at verse 18. In sum, Psalm 68 is a historic and prophetic overview of Israel as it was, as it is now and as it will be when the beast, the antichrist, sets his feet in Israel (verse 21). The snow in Israel sent me into His Word early this morning; and so how anxious is the rest of the Bride of Christ for the promise of the Harpazo? If snow flakes have this effect on the Bride of Christ one can only imagine!

So, for the record, I do not see all that white stuff on the ground in Israel as just another weather event, I see it as a special snow as Psalm 68:14 says.
Posted by Sean Osborne at 7:32 AM 15 comments:

Global SITREP B9-13: A Nuclear Iran 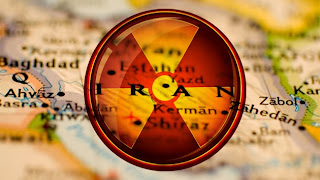 04 December 2013: The overnight assassination of the Hezbollah commander for terrorist operations on foreign soil, Hajj Hassan Hollo al-Laqqis (his Jeep Cherokee looks like so much metallic Swiss cheese from automatic weapons fire), has to have had an effect on the enemy forces. Instead of blowing him up as was done to his Hezbollah predecessor Hajj Imad Mughniyeh, this assassination team got up very close and personal in dispatching this terrorist to his eternal fate. Were it possible to do the same to Ayatollah Khamenei or Hassan Nasrallah that would be the case, and that is the message that has been sent by this assassination: This and worse is waiting for you when the time comes (see Psalm 83:9-12 for the gruesome prophetic details). 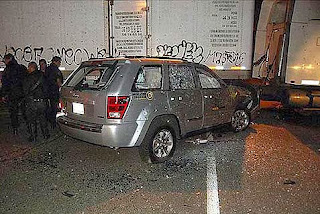 02 December 2013: Unless the military option is exercised by the State of Israel at the direction of Prime Minister Benjamin Netanyahu within a very narrow window, there is nothing else on this earth that will prevent the Islamic Republic of Iran from arming itself with nuclear weapons of its own manufacture from start to finish.  These nuclear weapons will range from Radiological Dispersion Devices (RDD), the so-called "dirty bombs," to theater and strategic nuclear weapons in the form of warheads fitted upon cruise and ballistic missiles. Both the United States of America and the State of Israel appear to have talked the talk but failed to walk the walk to prevent this catastrophe from occurring. The world's foremost state sponsor of terrorism, with an apocalyptic national doctrine based upon Shi'a Twelver eschatology, is now within a very few days of acquiring the method with which it can achieve its goal.

1 December 2013: Just a note to say that Eschatology Today's four-part series and epilogue entitled "The Prophetic Road to Revelation," first posted during early-April and mid-May of 2009, has (finally) been updated as of this date. Aditional updates will also occur during 2014, but until then... Marana'tha!
Posted by Sean Osborne at 2:16 PM No comments: