Welcome Back Prime Minister Netanyahu. Here is Christian America's Message to You. 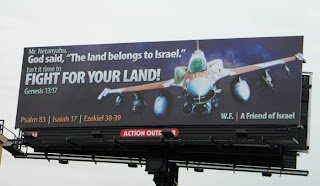 UPDATE 1 July 2010: Here is an image of the "Netanyahu - Fight For Your Land" billboard that went up yesterday near the interchange of I-85 and I-285 in northeast Atlanta, Georgia.
AWESOME!!!

29 June 2010: This is a billboard that will, Lord willing, go up just in time for Israeli Prime Minister Benjamin Netanyahu's scheduled July 6, 2010 visit to the United States. Click the image for a full-size version.

Sha'alu Shalom Yerushalayim - Pray for the Peace of Jerusalem! 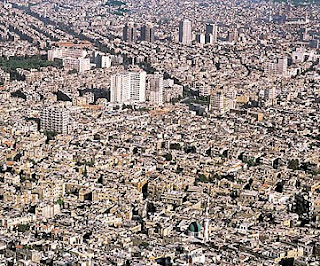 21 June 2010: According to today's issue of the Kuwaiti daily newspaper Al-Anba another conference will hosted by the Syrian government in Damascus within the next week or so. The conference attendees are apparently limited to Iran, Syria, and the terrorist organizations Hezbollah and Palestinian Islamic Jihad (PIJ).

The stated purpose of this conference, which was agreed to on 4 June 2010, the 21st anniversary of Ayatollah Ruhollah Khomenei's death, is to "activate resistance in the region in light of an expected Israeli offensive against Iran or against Hezbollah in Lebanon."

Posted by Sean Osborne at 12:06 PM No comments:


20 June 2010: Current Middle East events are definitely stage setting for the final fulfillment of the Israeli War prophecies of Psalm 83 and Ezekiel 38-39. Turkey's recent newsworthy gyrations against Israel has got the “EZEKIEL 38 NOW” advocates rightfully at the edge of their seats. Now, Turkey and Iran, both members of the Ezekiel 38-39 prophecy, share a common enmity toward Israel.
Mainstream media has seized the opportunity to make Turkey’s bid to embarrass Israel and Iran’s nuclear aim to destroy Israel front page news. This media blitz has played an instrumental part in creating a significant amount of recent Ezekiel 38 newspaper exegesis.
Certainly, there is just cause to consider the Ezekiel 38–39 prophecy in light of recent events, however, what about Hezbollah, Syria, Hamas, and the Palestinians? They also are at odds with Israel and likewise frequently dominate current Mideast headlines. Curiously, Ezekiel 38 describes nine distinct populations by their ancient names including Russia, Iran, Turkey, and Libya but omits the historic name equivalents of Hezbollah, Syria, Hamas, and the Palestinians.
CLICK HERE to read Bill Salus' entire Bible prophecy Today article
Posted by Sean Osborne at 5:56 AM 16 comments:

8 June 2010: I am posting the most recent newsletter (hat tip to Drew!) from Mitch at Chosen People Ministries in New York City, N.Y. This "Completed Jew" ministry is about to kick off a most ambitious outreach campaign based upon the Messianic prophecy found in Isaiah 53.
Shalom!
We are about to begin one of the most ambitious evangelistic outreaches we have attempted in more than half a century. The outreach focuses on Isaiah chapter 53, with the slogan "This Chapter Will Change Your Life!" We hope and pray that many seekers will discover that the One who is described in Isaiah 53 can and will transform the life of anyone who calls upon Him!
Let me give you an overview of the Isaiah 53 Campaign so that you can pray with us.
Our goal is to familiarize both Jewish and non-Jewish people with the great Messianic prophecy recorded in Isaiah chapter 53, and we'll be starting in our own back yard, New York City. We want to proclaim the fact that the Gospel message is Jewish – and that it is true!
You see, most Jewish people believe that when Jewish people become followers of Jesus, they give up their Jewish identity. This is perhaps the greatest stumbling block keeping Jewish people from Jesus.
Isaiah chapter 53 is one of the clearest prophecies in the Hebrew Scriptures predicting the coming of a Messiah who would suffer, but also reign as king on the throne of David. Both of these prophetic portraits of the Messiah were fulfilled in Jesus of Nazareth. Through the Isaiah 53 Evangelistic Campaign, we want to show Jewish people that the message of Jesus is founded on the Jewish Scriptures!
We will share this message with millions of New Yorkers through advertising in subways, on buses and billboards, and in The New York Times as well as other major publications and websites. The ads will offer a free book called Isaiah 53 Explained, which will be sent to all who respond either by phone or on our soon-to-be-launched website.
This outreach campaign will be combined with our Summer Training and Evangelism Program (STEP), in which a team of Chosen People Ministries staff members and volunteers will conduct two weeks of intensive ministry in New York City. The STEP team will do both public evangelism and follow-up with those who responded to the Isaiah 53 ads. They will be meeting with seekers by telephone, through personal visitation, and in small group Bible studies. We believe that this will be one of our largest and most effective evangelistic efforts in the New York area!
It is our goal to send a free copy of Isaiah 53 Explained to as many interested people as we can. We know that this effort will be blessed because of another passage in the book of Isaiah from chapter 55, where the prophet writes,
"So shall My word be that goes forth from My mouth; It shall not return to Me void, But it shall accomplish what I please, And it shall prosper in the thing for which I sent it." (Is. 55:11)
We are trusting God that He will produce fruit through His Word touching many lives in this campaign!
If you want us to send the book to your Jewish friend or friends, we will! Just send us their name and address. The book will be ready to mail around the third week of June.
The advertising budget for this evangelistic campaign is about $300,000; the books cost $2.00 each to print and there will be postage costs in addition. Your gift today would be a great help as we bring the message of Jesus, the Messiah foretold in Isaiah 53, to the Jew first and also to the Gentile!
Thanks for praying and caring!
Your brother,
Mitch
Posted by Sean Osborne at 8:54 AM 3 comments:

Current Events: What the Bible Says; What Jews are Expecting 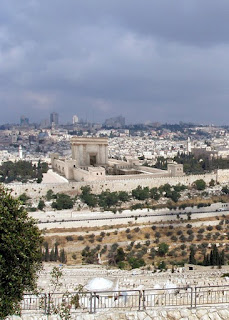