Is Ezekiel's Army About to Face Off with the Arabs? 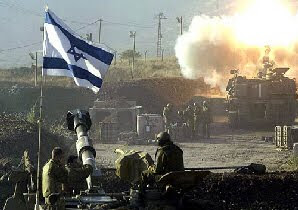 So I prophesied as He commanded me, and breath came into them, and they lived, and stood upon their feet, an exceedingly great army. (Ezekiel 37:10, nkjv).

21 May 2011: Some bible teachers, like Joel Rosenberg and me, believe Ezekiel 37:10 describes an army, whereas others like Dr. Thomas Ice and Ray Gano believe Ezekiel is predicting a great multitude or host will emerge out of his prophetic "Dry Bones" vision.

Is the Arab Spring setting up for a Winter War?

In a last ditch effort to politically broker a final Arab state called Palestine, U.S. President Barrack Obama showed his Pro-Palestinian trump card. In May, 2011, with his left hand clenched in a seeming show of American solidarity for Israel’s security, Obama snuck his right hand into Prime Minister Benjamin Netanyahu's cookie jar, and was caught red-handed attempting to pick-pocket Israel’s most prized possession; their homeland.

Obama's presidential play prompted Netanyahu to push his poker chips forward, lay all his cards on the table, and shout, "ISRAEL'S ALL IN!" Netanyahu seized the opportunity to call the U.S. President's and Palestinians bluff. The King of Israel revealed his Royal Flush, leaving little wiggle room for future Mideast peace negotiations.

His strict laundry list of conditions hit at the heart of every Palestinian contention. To the Palestinians, this was nothing short of a declaration of war. (Read entire article now.)