Syria: At The Tipping Point of a Regional War

18 June 2012: Big power jostling has moved the current focus of the Syrian civil war to the Russian Naval Base located at Tartus, Syria (image above).  The Russian sector consists of the top half of the northernmost pier, the northern breakwater/jetty and the several large buildings and grassy area to the immediate right.  The bulk of the port facilities to the south are under the control of the regime under Bashar Al-Assad. The Russian Naval Base is the focal point of Russia's military support for the Al-Assad regime and the finger-in-the-eye of all Western/NATO/UN/Islamist attempts to shape the future of Syria in their image according to their agenda. These are the events occurring the real-world that all watchmen take keen note of.


However, students of Bible prophecy should be aware that Syria (ancient Aram) is completely absent from even so much as a single mention in the sequence of prophetic wars between Psalm 83 (which began the process of fulfillment in Damascus during November 1947) and Ezekiel 38/39. Therefore, the fulfillment of Isaiah 17 most likely should be viewed as a parenthetical prophecy to the full sequence and, possibly as being the catalyst for the final fulfillment of Psalm 83 (and its related prophecies) and Jeremiah 49:34-39 as a matter of immediate consequence. These prophetic fulfillment's over the course of a very few years will lead to the fulfillment of Ezekiel 38/39 and shortly thereafter to Israel's prophesied 70th Week.

15 June 2012: During the last great World War Winston Churchill said that "truth is so precious that she should always be attended by a bodyguard of lies." That's a true statement when faced with fanatical enemies. However, blatant disinformation is something else again.  I have come to learn that the attack helicopters Hillary was crowing about are in reality just spare parts to keep Al-Assad's existing choppers airborne and in the fight against a growing Al-Qaeda insurgency. Secondly, the divisions of Russian troops said to be planning for deployment to Syria is actually just a part of a brigade of Russian naval SPETZNAZ that will be relieving their fellows who have been securing their port facilities at Tartous and Latakia for month now. This is normal rotation. Our forces do it all the time as well. My eyes are open for further developments.

13 June 2012: Within the past 24 hours two developments have occurred and both involve Russian military intervention in the Syrian civil war.  In the first development US Secretary of State Hillary Clinton went public yesterday with intelligence information that Russia was in the process of transferring attack helicopters to increase the combat capabilities of Al-Assad's forces. For its part Russia has not issued a denial to Clinton's statement. There are as yet no verified details to report on which type of attack helicopters are being transferred to Syria, but a good guess is that the export version Mi-25/35 Hind the Syrian Arab Air Force pilots are well familiar with are the type being supplied. According to a 2011 Jane's Defense Information Group report the Syrians already have 48 of these attack helicopters (Mi-35 Hind seen below) in their inventory. 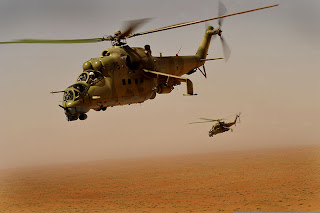 The second development of note is a widely circulated report dated 12 June from the independent Russian newspaper Nezavisimaya Gazeta. The report details how Russian President Vladimir Putin has directed the Russian general staff to plan for a Russian intervention of combat forces into Syria with or without United Nations Security Council approval. The Russian forces are to include the 76th Airborne Division, the 15th Army Division and a brigade of Black Sea Fleet special forces. Details of the deployment are also being coordinated with working groups from the Shanghai Bloc and the post-Soviet CTSO which most former Soviet Republic are members of. These forces are to deploy in support of Al-Assad forces. According to the secretary-general of the Collective Security Treaty Organization (CTSO), Nikolai Bordjusha, “the task in Syria is likely to be to impose peace—primarily against the insurgents.” 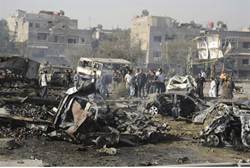 10 June 2012: The image at the top was taken from an INN news report dated today by Chana Ya'ar which is headlined as "Heavy Fighting Reported on Streets of Damascus." It is proof positive that Syria's civil war pitting the regime of Bashar Al-Assad and his Alawite/Shi'a minority against a coalition of heavily armed Islamist Sunni militias has been brought by those militias into Damascus itself. This reality highlights the fears of both the West, Israel and the Iranian-led alliance which includes Iran, Syria and Hezbollah of Lebanon.  The West fears the loss of Syrian missiles and their biological and chemical weapons warheads (WMDs) to Sunni Islamists aligned with Al Qaeda's brand of jihadist Islam. Israel fears such a development as well because its would be the most likely target of these weapons. Most of all Iran, Hezbollah and the Al-Assad regime fear their loss because it would definitively tip the military balance of power in favor of the Sunni Islamist militias.


For their part the Iranians, who some time ago stood up a joint Iran-Syria-Hezbollah warfighting command post (CP) in Iran, have no intention of allowing a Sunni victory of this magnitude, nor will they allow a Western military or Israeli intervention to secure or destroy the Syrian WMD weapons. These fearful facts were not lost on the Sunni militias. Five days ago in a Rapture Forums discussion thread I predicted that these Anti-Assad militias should be expected to exacerbate the situation for the Al-Assad regime and would bring the war directly to Damascus and these weapons depot sites.  As of this date the militias have begun attacking Damascus and the electrical power infrastructure necessary for Assad's still loyal forces to defend the capital and the WMD weapons depots (click here for a related report and updates). We should now reasonably expect an even more direct intervention in the Syrian civil war by Iranian/Hezbollah military forces to reverse the rebels gains and to establish an on-the-ground fact to further complicate Western or Israeli interventions.


At this point I am sure all of us are aware of the various prophecies (Isaiah 17, Psalm 83, Joshua 13:1-7, Jeremiah 49:34-39, and Ezekiel 38-39 among others) yet to be fulfilled in these pre-70th Week years, as well as which of the aforementioned nations are mentioned and which are not, and at what juncture within a given prophecy. All of that notwithstanding, it certainly seems to my way of thinking that events in Syria will be the focal point, the catalyst if you will, of setting in motion these sequential pre-70th Week wars. That said, and while it is hard to imagine an even higher ratcheting up of the tensions now present in the region, anything is possible including a significant preemptive attempt to draw Israel into the ongoing warfare.