Jeremiah 49: Will a Coalition of Nations Move Against Iran? (Yes, They Will!!) 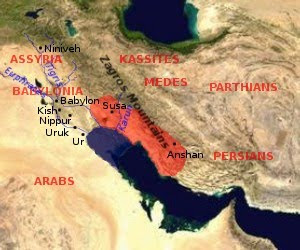 27 April 2012: At this point, some 19 months since first posting this "work in progress," there exists for the first time very strong evidence for the existence of a coalition of nations prepared to move militarily against the nuclear weapons aspirations of the Islamic Republic of Iran in what I believe will be a highly probable literal fulfillment in our day of Jeremiah 49:34-39. (Please read the original posit on this interpretive theory down below for a refresher if that is necessary.)

Israel Defense Forces Chief-of-Staff Lientenant General Binyamin "Benny" Gantz informed the world yesterday of the existence of a coalition of nations who are prepared to execute offensive, preemptory military strikes on Iranian military targets should it become necessary to do so. While not specifying which nations would join Israel in striking Iran, LTG Gantz was completely unambiguous in the words he used:

"The military force is ready, not only our forces, but other forces as well. We all hope that there will be no necessity to use this force, but we are absolutely sure of its existence."

There is no doubt in my mind that the Shi'a Twelver regime in Iran hold that the acquisition of an indigenous nuclear weapons and delivery capability as the key to achieving a chaotic and apocalyptic scenario in order to self-fulfill their own eschatological beliefs about an Islamic messianic figure known as the al-Mahdi. In this context it is simply not possible for the Iranian regime to abandon its eschatological beliefs any more than it would be for the Bride of Christ to abandon the blessed hope of the Harpazo. Therefore, it does appear that full-scale regional warfare in the Middle East and Southwest Asia is a very near inevitability given the closeness of Iranian technological success in achieving nuclear weapon capability. As has been have stated often times before, for Israel "Never Again" means Never Again. The Lord's will be done for His Divine purposes.

21 October 2011: It has been a full year since this article was posted here, and an awful lot has changed. Across the Arab-Islamic fundamentalist world there has occurred a sea change, particularly in the past 10 months of this year. Rod-of-Iron dictators who had held Arab Islamic fundamentalists at bay since the Iranian (Persian) revolution of 1979 have been removed from power by popular uprisings or are teetering on the brink of being ousted in the face of armed rebellion, to the killing of key fundamentalist leaders in the Islamic jihad movement. The world has focused on this so-called "Arab Spring."

But another key event has occurred this year which I have mentioned previously in this blog, and that is the ongoing armed clash between the Arab ruling House of Saudi Arabia and the apocalypse-minded Persian Shi'ite Twelver regime of the Islamic Republic of Iran. These armed clashes between Iranian-funded and inspired Shi'a have occurred on Yemeni soil, on Saudi soil and on Bahrani soil. With the recent revelation by the United States of an Iranian plot to assassinate the Saudi Ambassador to the US and to attack the Saudi and Israeli embassies in Washington, DC this Arab-Persian war nearly arrived on US soil. Understandably, the Saudi's are livid; they are demanding that action be taken against Iran, particularly the ending of its nuclear weapons program by force of arms.

This new paradigm finds the Saudi king and the Israeli leadership in agreement on what needs to be done with respect to the Iranian nuclear program, and the US is voicing its pledge that Iran will be held accountable for the assassination and embassy bombing plot. In Israel there has been conservative opinion expressed which holds that PM Netanyahu and his cabinet agreed to renounce their key principles in dealing with the terrorists of HAMAS to free Gilad Shalit from captivity in order to "clear his desk" for Israel to confront Iran head on. On Tuesday evening, October 11th Prime Minister Netanyahu spoke to his countrymen about a "window of opportunity that is about to be closed and connected it to geostrategic developments."

Is Iran now facing the prospect of a "perfect storm" coming from all directions external to its own borders? Are the words of the prophet Jeremiah below relative to this new situation? I tend to think they are, and I tend to think we may see their fulfillment to the letter as Bible prophecy is always fulfilled. Not only does Iran have this external threat to deal with as the prophecy details, but should the Ayatollah's regime be subjected to the right kind external non-nuclear military action then the door opens for the Iranian regime to see revolt from within its own borders as the second to last verse appears to indicate (emphasis added): "‘And I will send the sword after them Until I have consumed them. I will set My throne in Elam, and will destroy from there the king and the princes' says the Lord."


The word of the LORD that came to Jeremiah the prophet against Elam, in the beginning of the reign of Zedekiah king of Judah, saying, “Thus says the LORD of hosts:

‘ Behold, I will break the bow of Elam, The foremost of their might. Against Elam I will bring the four winds From the four quarters of heaven, And scatter them toward all those winds; There shall be no nations where the outcasts of Elam will not go. For I will cause Elam to be dismayed before their enemies And before those who seek their life. I will bring disaster upon them, My fierce anger,’ says the LORD; ‘ And I will send the sword after them Until I have consumed them. I will set My throne in Elam, And will destroy from there the king and the princes,’ says the LORD. ‘ But it shall come to pass in the latter days: I will bring back the captives of Elam,’ says the LORD.”

Although this is a work in-progress, I'd like to propose an interpretation whereby this prophetic "Judgment on Elam" from Jeremiah, which self-dates to the beginning of the reign of King Zedekiah, or circa 595 BC, will be fulfilled in the near future, possibly prior to the final fulfillment of Psalm 83, and definitively prior to Ezekiel 38/39. I'm anchoring this future fulfillment upon the historical fact that the Elamite Kingdom ceased to exist during the ten year process of the Assyrian conquest led by King Ashurbanipal which was completed in 639 BC. Since Before Christ dates count downward, the gap of time between these years places the prophetic "Judgment on Elam" as being given to Jeremiah by the Lord approximately 44 years after the Assyrian conquest of Elam, and thus providing a strong context for latter days fulfillment.


There is also the related issue of a clear distinction in those ancient times between the Elamites and the Pä·ras'/Persians (old Persian: Pārsa) of Ezekiel 38:5. The Persian's originated in the region east of Elam defined by the natural boundary created by the Zagros Mountains, and the eastern most extent of the Elamite Kingdom at the city of Anshan/Anzan (modern-day Tepe Maylan, Iran). With the collapse of the Elamite Kingdom the Persians slowly took control with the Medes of what we know today as modern Iran.


According to several maps I've studied, the ancient Elamite Empire could well be considered to constitute the core territory of the present day Iranian nuclear effort (i.e. the uranium mines and yellow cake processing facilities at Saghand and Ardekan, near Yazd; the Uranium Conversion Facility (UCF) at the Esfahan; the Natanz uranium enrichment facility, and the nuclear crown jewel at Bushehr). The Iranian nuclear weapons program is fully integrated with the Iranian ballistic missile delivery vehicles, and which together could well be interpreted as the the arrows of "Elam's" bow, "the foremost of their might" of verse 35 which is precisely the greatest strength of the current Iranian military.


In the next verse we read that the judgment comes in the form of "the four winds" (i.e. all points on the compass and intimating many nations) as being the "sword" the Lord sends after them. Also looking at the map of Iran, it does appear that Arab nations, the principle of which is Saudi Arabia, would be among those coming against Elam from the southern "wind" along with many other nations constituting the other three directions. This includes Israel and many other nations such as the NATO alliance, and clearly invokes the modern day notion of a warfighting coalition of nations such as we saw in the early 1990s Operation Desert Storm against Iraq and the present day Operation Enduring Freedom in Afghanistan.


Some current context for this interpretive theory.


19 months ago (FEB 2009) there were more than a few highly qualified nuclear weapons experts at the Herzliya Conference in Israel - one of whom was Russian Major-General Vladimir Dvorkin - who said that the Islamic Republic of Iran already had already achieved a nuclear weapons capability.


This was reported world-wide by Bill Gertz in his "Inside the Ring" column. General Dvorkin was quoted saying, “Iran has developed the capability to produce and fire nuclear weapons.”


General Dvorkin told the Hezliya Conference Iran had acquired most of the components for building its nuclear weapon by 2003, and "The only way I see the problem being resolved is by military action.”


Former U.S. Speaker of the House of Representatives Newt Gingrich told this same conference three years ealier that three Iranian nuclear weapons constituted a nuclear holocaust for Israel, and if used against the United States would result in the loss of two to three American cities, and the direct result of such an attack would be that "freedom as we know it will disappear, and we will become a much grimmer, much more militarized, dictatorial society."


It is a standing premise of this interpretive theory that while the "Global Oligarchists" are creating a hideous system of world governance ready-made for the coming Western Antichrist to usurp, they are not even close to being the suicidal maniacs of Jihadist Islam - such as the Shi'a Islamic Republic of Iran has created. I think it reasonable to expect them to act in concert - in a grand military coalition which they most certainly do control right now - to defend the world system they're creating from the Iranian al-mahdist apocalypse.

Arriving at a point-of-no-return regarding Iranian nuclear development, a point possibly defined by an Iranian nuclear test detonation, possibly occurring in North Korea instead of Iran, a coalition of nations attacking these many above ground nuclear sites might release radiation and necessitate the need for the population to seek refuge in distant places, as intimated in verse 36c: "There shall be no nations where the outcasts of Elam will not go." The Bushehr plant particularly meets this criteria.
Posted by Sean Osborne at 5:59 AM 50 comments: