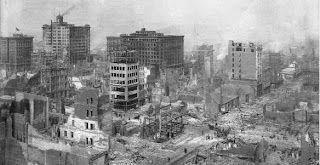 31 January 2009: The embedded link below will allow you to download and listen to Part 1 MP3 file of Bill Salus' discussed the political and prophetic ramifications very likely to result from the current Israel-Hamas conflict with Frank Pastore on KKLA 99 FM.
The Geo-Political & Geo-Prophetical
Ramifications of the Israel-Hamas War
Posted by Sean Osborne at 2:45 PM No comments: 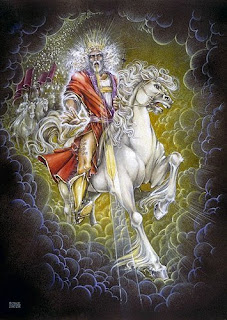 24 January 2009: As is the case with the majority of the exegesis within what some have dubbed the “Islamic End Time Paradigm,” an undue excess of emphasis has been placed on three prophetic verses from Numbers 24:17-19 by those trumpeting an “Islamic Predominance” during these last days. A severe twisting of the meaning of these verses attempts to lay them as the exegetical cornerstone which adherents perceive to be an Islamic world government led by a Muslim Antichrist. Deconstructing this bogus paradigm begins by removing its foundation.
“I shall see him, but not now: I shall behold him, but not nigh: there shall come a Star out of Jacob, and a Sceptre shall rise out of Israel, and shall smite the corners of Moab, and destroy all the children of Sheth. And Edom shall be a possession, Seir also shall be a possession for his enemies; and Israel shall do valiantly. Out of Jacob shall come he that shall have dominion, and shall destroy him that remaineth of the city.” —Numbers 24:17-19 (KJV)
According to the “Islamic Predominance” exegesis the above King James Version of the prophetic text has been twisted into a very myopic exegesis which basically posits that when Yeshua Ha'Mashiach returns during the apogee of the battle of Armageddon (Har Megiddo), His singular purpose will be to “destroy” the modern day descendants of the Moabites, Midianites and Edomites, i.e. the sons of Ishmael, the Arabs. In this view Yeshua Ha'Mashiach is reduced from His true role as “KING OF KINGS AND LORD OF LORDS” into something of no more import than any of the common Serbian war criminals guilty of the Muslim ethnic cleansing in Bosnia-Hercegovina a little over a decade ago.
In keeping with the ultimate truth that the Bible interprets the Bible, the correct exegesis for this prophetic passage is found in Revelation 19. The symbolism in the above prophecy is not a literal condemnation limited to the destruction of the surrounding Arab nations or the Arab people. On the contrary “Moab” is representative of all nations from the far corners of the earth per Revelation 19. Indeed, the prophet has given us another most important clue with the phrase “sons of Sheth.” As the symbolic use of Moab points to all of the nations of the earth, so to “sons of Sheth” is indicative of all the peoples of the earth.
Posted by Sean Osborne at 9:55 AM No comments:

Babylon: The Megas Pornē Riding on the Fourth Beast 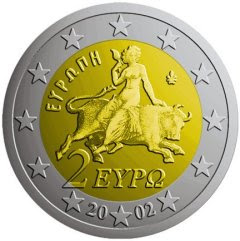 19 January 2009: In my continuing in-depth research there is a considerable amount of Macedonian/Greek reference, in particular as it applies to both Antiochus IV Epiphanes (of Antioch, Seleucid Empire circa 167 BC) and a descendant of his, Gaius Julius Antiochus IV Epiphanes, circa 70 AD, (a/k/a Antiochus IV Commagene as referenced by Flavius Josephus in his history "The Wars Of The Jews." These two, the latter in particular, were prototypical or templates of the coming Antichrist. The ultimate common ancestor of both of these ancient Greek/Macedonian kings is one of Alexander the Great's Macedonian Generals (Diadochi) named Seleucus. Seleucus founded the Seleucid Empire (one of four rump Empires carved from Alexander's Empire) upon the death of Alexander and took for himself the title Seleucus I Nicator, in a fulfillment of prophecy as foretold by the Hebrew prophet Daniel.

The currency seen above is the current Greek 2 Euro coin minted in 2002, which has a certain prophetic meaning relative to Revelation 17:1. It features the Megas Pornē (Great Harlot - one who yields herself to defilement for the sake of gain) riding upon a beast. The beast featured on the coin is not identical that the scarlet-colored beast of seven heads and ten horns of Revelation 17:3.
Posted by Sean Osborne at 5:46 PM No comments:

During additional research last evening, some crucial, inter-related eschatological points made themselves apparent. The notion that Antichrist will be Islamic carries with it the implied baggage that his global empire arises from within the Islamic world which has been mutated by some authors into an implication of reference to the eastern leg of the Roman Empire. Nothing could be further from the truth of this prophetic matter.

The prophetic Word of God declared otherwise, most recently about 1,980 years ago through John on Patmos, who declared to all mankind, “The Revelation of Jesus Christ, which God gave Him to show His servants—things which must shortly take place. And He sent and signified it by His angel to His servant John, who bore witness to the word of God, and to the testimony of Jesus Christ, to all things that he saw. Blessed is he who reads and those who hear the words of this prophecy, and keep those things which are written in it; for the time is near.” (Revelation 1:1-3 NKJV)

I also remind the reader of the Lord’s admonition regarding this prophetic Word, for it is NOT to be trifled with: “For I testify to everyone who hears the words of the prophecy of this book: If anyone adds to these things, God will add to him the plagues that are written in this book; and if anyone takes away from the words of the book of this prophecy, God shall take away his part from the Book of Life, from the holy city, and from the things which are written in this book.” (Revelation 22:18-19 NKJV)

“Then I stood on the sand of the sea. And I saw a beast rising up out of the sea, having seven heads and ten horns, and on his horns ten crowns, and on his heads a blasphemous name. Now the beast which I saw was like a leopard, his feet were like the feet of a bear, and his mouth like the mouth of a lion. The dragon gave him his power, his throne, and great authority.” (Revelation 13:1-2 NKJV)

As I referenced in blog comments made to Bill Salus' Prophecy Depot, this above prophetic picture is given in the reverse order as it was originally given to the prophet Daniel. (see Daniel 2: 31-43) Instead of Babylon, Persia, Greece and Rome we see Rome, Greece, Persia and Babylon.

The key eschatological reference here is that not one leg of the Roman Empire is singled about, but both are. And below them are the ten toes of the two feet upon which it stood, not just five of the eastern foot, but all ten of both feet, which is inclusive of all the territories of its predecessors.

Then in Daniel 2: 44-45 we are given the key with which to interpret the prophetic Word of God: "In the time of those kings, the God of heaven will set up a kingdom that will never be destroyed, nor will it be left to another people. It will crush all those kingdoms and bring them to an end, but it will itself endure forever. This is the meaning of the vision of the rock cut out of a mountain, but not by human hands—a rock that broke the iron, the bronze, the clay, the silver and the gold to pieces. The great God has shown the king what will take place in the future. The dream is true and the interpretation is trustworthy."

The above is a direct reference to the Kingdom Of God, and of the King of kings and Lord of lords, our Messiah Jesus Christ. It was His Kingdom which came to be in 33 AD with His Crucifixion and Resurrection during the period of the Roman Empire. The Roman Empire was THE LAST of all earthly empires according to God Almighty.

It is all of those specifically referenced ten toes of loose iron and clay that arise again as the kingdom of the Antichrist, not just five of them at the terminus of the eastern leg and foot. This prophetic image specifically details that all subsequent empires are irrelevant to the prophetic picture from our Lords perspective. And this includes the subsequent Empire of Islam, which truly was no empire of individual states, but of a single political entity – the Islamic Khalifa (Caliphate) in all of its various forms. At no time in history did the Roman Empire ever have dominion over Arabia, the birthplace of Islam. Neither did the Macedonian-Greek Empire of Alexander the Great, nor Persia at its greatest territorial extent under either Darius I or as reconstituted under Artaxerxes III, nor did the Babylonians.

Clearly and unambiguously, with the prophetic Word of God being the final arbiter as it is written in Daniel 9:26b (NKJV) “And the people of the prince who is to come shall destroy the city and the sanctuary” is a direct reference to the Roman Empire and its peoples, of all ten toes and none other. It was indeed the Legions of Rome who destroyed the city and the sanctuary in 70 AD and it will be from the descendants of the people of Rome that Antichrist will arise in these ‘Last Days.”
Posted by Sean Osborne at 10:39 AM 3 comments:

18 Januaray 2009: Welcome to the Eschatology Today blog. This blog will deal specifically with Bible prophecy.
Posted by Sean Osborne at 10:35 AM 2 comments: