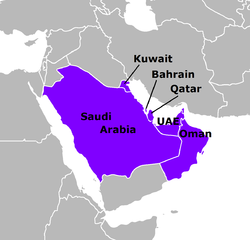 Update 15 May 2012: New details are emerging from the 32nd GCC Summit. What is taking place is actually the creation of a federation among the Gulf Arab countries, modeled more or less on the European Union but with the Sunni Islamic model of the United Arab Emirates. It will most realistically be brought into existence as a federation of tribal monarchies founded upon the "creed of Islam."

This "Federation of Arab States of the Arabian Peninsula," for lack of an offical name, is being born with a Gross Domestic Product (GDP) of $1 Trillion and 35% of the world's proven oil reserves. It is being armed primarily by the United States with over $60 billion in military sales to the Saudi Arabians alone. Even tiny Bahrain has acquired over $1.5 billion of new US warfighting hardware in the past ten years. Efforts are underway to also include Yemen within this federation which would give this new Arab peninsular superstate a total population of more than 85.5 million people and make it a dominant power in the region, even over the Islamic Republic of Iran.

14 May 2012: The 1979 fundamentalist Shi'a revolution in Iran which resulted in the establishment of the Persian Twelver-Hojjatieh regime of the Islamic Republic of Iran. The subsequent 33 years of that rule has brought the Middle East to the precipice of a truly horrific war.

Unbeknown to some the Iranian revolution was followed by an economic alliance among the Sunni Gulf Arab states that we know as the Gulf Cooperation Council or GCC. The GCC, established in May 1981 is composed of seven Sunni Arab states:Kuwait, Saudi Arabia, Bahrain, Qatar, the United Arab Emirates and Oman.

Until very recent Iranian subversion and destabilization activities that began in 2011 and which centered upon the few Shi'a who live in these majority Sunni Arab states, the GCC concerned itself with economic and commercial and financial issues in common among themselves. The reaction of the GCC governments was to create a rapid reaction military force composed of military units from Saudi Arabia, Kuwait and the UAE to put down Iranian-fomented revolution within Bahrain.

This has led to the morphing of the GCC nations into a militarily confederated bloc of nations known as the Peninsula Shield Force to defend themselves against Iranian aggression which in turn is based upon Shi'a Twelver apocalyptic eschatology.

Christians should take note of the emergence of this new military alliance in the Middle East and recognize it for what it very probably represents - the real world emergence of what Ezekiel prophesied would exist in the latter days. Ezekiel 38:13 tells us, "Sheba, Dedan, the merchants of Tarshish, and all their young lions will say to you, ‘Have you come to take plunder? Have you gathered your army to take booty, to carry away silver and gold, to take away livestock and goods, to take great plunder?’”’

Yes, in these latter days I believe we are eyewitnesses to and should recognize the emergence of GCC as a type of NATO for the Arabian Peninsula, just as Ezekiel said they would be, and in close association with the Western nations (Europe and the Americas) prior to the start of the 70th Week, and whom Ezekiel referred to as "the merchants of Tarshish, and all their young lions (European powers and former European colonies in the Americas)."
Posted by Sean Osborne at 10:38 AM 6 comments: