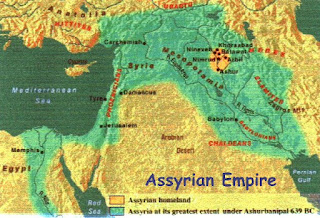 Assyria also has joined with them;
They have helped the children of Lot.
Asaph, Psalm 83:8


19 July 2012: Although this may seem redundant to some readers, we're going to look at Psalm 83:8 once again with the intent to firmly affiliate the modern-day nation that God inspired the Levite priest Asaph to include as the tenth of the confederated enemy peoples and regions who have come against Israel in these last days.  As essential backgrounders for this topic I invite the reader to also take the time to review "All these things be fulfilled... Part I and Part II" posted in 2009 as well as "The Psalm 83 Inner Ring Solidifies" posted 2010 to this blog.

In revisiting the subject of Psalm 83 I have learned that according to a commentary by Matthew Henry and the article "Who was Asaph?" (an excellent "must read" study) written in 2005 by Richard Thompson, what we know as Psalm 83 is the last of the total of twelve Psalms that bear Asaph's name as the composer. We know that Asaph lived circa 1020-920 BC, and that Psalm 83 was most likely composed near to Asaph's 100th year during the reign of king Rehoboam and following the twin disasters of the rending of Israel into Israel and Judah and the invasion by Egypt's pharaoh Shishak. These historical details date Psalm 83's composition to about 925 BC.

What was Asshur's (Assyria's) situation circa 925 BC? At this specific point in Assyria's history the king was a man by the name of Ashur-dan II. Ashur-dan II's reign endured for all of 23 years, from 935 to 912 BC, wherein the year of 925 BC pretty much falls smack dab in the middle.  Now, for the previous hundred years Assyria had been subject to Aramean invasions to such an extent that by the end of those 100 years Ashur-dan II was completely preoccupied with securing the Assyrian heartland against these Aramean invasions. His primary task was in "rebuilding Assyria within its natural borders" according to Assyrian historian Peter BetBasoo. The British ancient history website historyfiles.co.uk concurs, saying  of the same time period "Recent Aramean migrations into Mesopotamia increase to the point where Assyria is seriously weakened and begins a decline and a century of total obscurity, reduced to its heartland." Reduced to its heartland, which means there was no such thing an an Assyrian Empire during this time. Total obscurity.

So the totally obscure Assyrian heartland was geographically located where? In the north-central part of modern-day Iraq, as seen in this Goggle Earth satellite image below and in the image at the top of this post. This region is also known as the Assur-Nineveh-Arbela triangle which survive to this day, respectively, as the modern Iraqi cities Qala'at Sherqat, Mosul and Erbil.  Assur in Psalm 83:8 is Iraq. 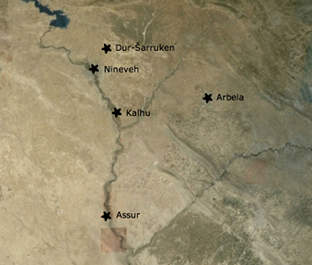 That issue settled, we now move into a more detailed analysis of what Iraq actually is, and what it is likely to become in the days ahead.

Iraq is an artificial, man-made construct that is geographically divided between the Sunni populated northern and western three-fourths of the country and the Shi'a southeastern quadrant. Ancient Assur lies wholly within in the northern Sunni section; the remainder is Shi'a dominated and closely tied to Shi'a Iran and ancient Elam.

We are informed in verse 8 that Assur helps Lot's progeny. Lot's children constitute modern-day Jordan, and there are real-world ethnic and tribal links that cross over the equally artificial Iraqi-Jordanian frontier. In fact, as mentioned in earlier posts referenced above as an essential part of this post, the help (zĕrowa`) provided by Iraq dates back to the 1948 war and every war since then in which Israel squared off on the battlefield against Jordanian forces there were Iraqi battalions and their commanders also in the fight.

It would seem that something also needs to occur respective to the cohesion of the present Iraqi nation. Perhaps that something is related to Jeremiah 49:34-39, or perhaps to the Sunni-Shi'a civil war that is ongoing in Aram-Syria at this time, or both. In any event, the Lord specifically identified Assur in verse 8 and the expected paradigm-shifting events are likely more widespread that we currently are able to envision.