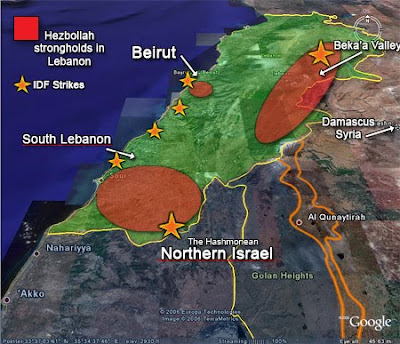 26 February 2010: TEL AVIV — Israel's military has been on alert for an imminent strike by Hizbullah.

Military sources said the intelligence community has been monitoring southern Lebanon for any evidence of Hizbullah construction of tunnels meant to penetrate Israel. They said the assessment was that Hizbullah was digging tunnels that could reach a military base or civilian community along the Israeli border with Lebanon.

"Hizbullah desperately wants to conduct an attack that would cause strategic harm to Israel and yet not leave any fingerprints that this was Hizbullah," a military source said.

The sources said the military has been preparing for several scenarios. In one, Palestinians trained by Hizbullah would emerge from a tunnel that reached Israel and kill as many as people as possible in an Israeli civilian community.

In another scenario, the Hizbullah tunnel would reach an Israeli military base. There, Hizbullah would conduct a nighttime abduction of several soldiers and bring them to Lebanon as hostages.

The military has also not ruled out that Palestinians trained by Hizbullah would capture and boobytrap an apartment building with hundreds of Israeli residents. In this scenario, the Palestinians would demand the release of thousands of their compatriots held by Israel.

"We believe that any future war will involve a major ground operation by Hizbullah that will target our civilian communities," another military source said. 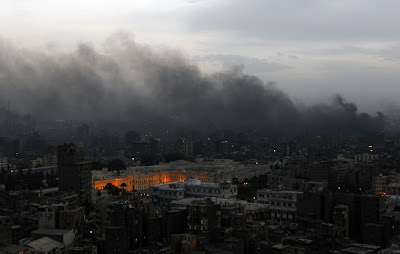 Update 14 February 2011: The Egyptian pro-demcoracy folks accepted the removal of President Hosni Mubarak with glee and revelry. The cheers had hardly subsided when one of the first acts of the new ruling Egyptian Supreme Council of military officers was to disolve the parliament, suspend the Egyptian constitution and impose marital law. Just what the pro-democracy demonstrators wanted, eh? And some think that Isaiah 19 is not a prophetic fulfillment in progress. Sigh.
Update: 11 February 2011: Caroline Glick has written an article published in today’s Jewish World Review entitled “Ideologically-driven strategic ineptitude” which picks-up where my article left off. Caroline’s article provides in-depth coverage of most the major issues (i.e. threats to world peace and U.S. national security) in which this administration’s blatant “ideologically motivated” incompetence and deliberate “strategic dementia” is leading the world down a path to an apocalypse which the Iranian Ayatollah and his sock puppet so fervently dream of. Indeed, all that will soon be left is for the Iranian’s to step in to fill the vacuum the Obama Administration is creating.
UPDATE 10 February 2011: The Egyptian military has now taken control of the country, and Hosni Mubarak is expected to announce his resignation shortly. While the MSM is quick to discuss how the Ihkwan Muslimun (Muslim Brotherhood) is the best organized opposition group in Egypt, they routinely fail to report that the Ikhwan are even better organized within the Egyptian military forces. Catch-22. And if Obama thought Mubarak was insubordinate to his dictates, just wait until the Egyptian generals tell Obama to go fly a kite. Of course, it goes without saying that the night is still young in Egypt this evening.
09 February 2011: Here is my straight-up take on what is occurring real-time in the real-world Middle East. It is these real-world events which will bring about the fulfillment of all the relevant Bible prophecies.
Unlike the Inept-in-Chief, his Ikhwan advisors and appointed incompetents in the U.S. State Department who have been attempting to micromanage the crisis in Egypt via remote control, there are other forces at work that have real boots on the ground in the former land of the Pharaohs.
When Obama & Company declared that the transition from Hosni Mubarak’s rule to whatever is supposed to come next had to begin “now” with Mubarak’s immediate resignation, they utterly failed to account for specific provisions of the Egyptian Constitution.
Not 24 hours later and still breathless from all of the overnight backpedalling, they realized the enormity of their sophomoric gaffe and then demanded that Mubarak sign all the documents necessary to transition the government to whatever it may be next and demand yet again the he get the heck out of Cairo “yesterday” Isn’t this the same kind of over-the-top, pompous American arrogance that Obama went on a world tour to apologize for? What is obvious here is that our king, The One, not only has no clothes on, but he has no alibi.
Benjamin Netanyahu and the Israeli government, are you paying attention to this? Do you really want these people working as a “good offices” intermediary on the issues of Israeli sovereignty and “Palestinian” statehood? I should hope not. I should hope that Israel answers to a Higher Authority than the current occupant of the Oval Office.
Now, about those other forces. If you listen to the MSM they’re all gaga over the presence of Code Pink in Cairo’s Tahrir Square protests. Code Pink is a Leftist distraction involved on a Middle Eastern tour courtesy of the Ikhwan Travelling Three-Ring Circus.
The real boots on the ground are the Ikhwan’s “A-Teams,” the Takfir wal Hijra and HAMAS in Gaza. These Islamic purists, born and bred of the al-Ikhwan al-Muslimun, are killing Egyptian security forces in running gun battles in the Sinai, in the border town of Rafah and conducting hit-and-run military operations like the one last weekend near Al-Arish that took out a natural gas pipeline serving Israel and Jordan. Half of Israel’s electricity comes from that gas. This occurred in the same timeframe as Egypt’s receiving permission for a waiver of the Egyptian-Israel peace treaty to deploy a couple of combat brigades into the Sinai. Eventually the other real boots on the ground, the IDF, will have to do something to both contain HAMAS and the other Gaza terrorists and to maintain the increasing threat to its peace treaty with Egypt.
These are the real issues that need to be addressed to make sense of the current chaotic scenario unfolding in Egypt. Jordan and the Saudi’s are also threatened by these same forces. And Lebanon, now firmly in Iranian orbit and guarded by Hezbollah and IRGC regulars, is a time bomb whose detonation will occur much sooner than expected. It is in America’s utmost national security interest to have these issues dealt with resolutely by experienced professionals. Keeping our B-Team on the job is a recipe for an unprecedented disaster of the Biblical Isaiah 19 and beyond proportions.
Posted by Sean Osborne at 10:00 AM 9 comments: