The Truth About Islam From Iran

UPDATE 24 FEBRUARY 2012: Iran (MNN) ― Sources in Iran say an execution order for Christian Pastor Youcef Nadarkhani has been signed. According to Present Truth Ministries (closely connected with Nadarkhani), this is grim news. Todd Nettleton, a spokesman for Voice of the Martyrs USA, confirms the news. "Apparently, that execution order has not been delivered to his family or his attorneys, but the report is that it has been signed. That means that at any time, he could be executed."

Let us pray for our dear Brother in Christ in Jesus Name; let His will be done.


UPDATE 12 OCTOBER 2011: After persistent reports of the past two days that Pastor Nadarkhani's case had been placed in the hands of Iranian Supreme Leader Ayatollah Ali Khamenei, new information has come out of Iran indicating that the Ayatollah wants no part of this international hot potato and that Nadarkhani's case was to be returned by the Iranian Supreme Court back to the Gilan Provincial court for yet another re-trial after certain technicalities and concerns about the initial investigation were cleared up.

This news comes as the American government announced that the Iranian government via the Iranian Revolutionary Guards Corps/Qods Force engaged in yet another act of war against the United States with an active plot to assassinate the Saudi Arabian Ambassador on US soil and to attack the Saudi and Israeli Embassies in Washington, DC. Given this completely disheveled state of affairs just about anything is possible, including the possibility that we might be one step closer to a literal fulfillment of Jeremiah 49:34-39, a fulfillment where a non-nuclear EMP assault upon Iran could lead the way.

UPDATE 02 OCTOBER 2011: Pastor Yousef Nadarkhani's problem may be approaching closure. This is irregardless of the fact that it seems obvious the Islamic Republic of Iran is intent on killing Pastor Nadarkhani. The Shi'a Twelver government in Iran appears to have scrapped the apostasy charges in favor of new false charges of Yousef being "a Zionist, a traitor [who] had committed security crimes" according to Gholam-Ali Rezvani, deputy governor general of Gilan Province.

It is not immediately clear if these new charges carry a death sentence. The reason the Iranian Supreme Court sent the case back to the court in Rasht (the capital of Gilan Province) was to convict Pastor Nadarkhani of apostasy, and have him renounce Christianity in favor of Islam. Pastor Nadarkhani steadfastly has refused, denying that he was ever a Muslim, and thereby defeating the religious charges against him. This is why the new government charges were whipped up out of nothing.

Here's where the rubber meets the road. The court in Rasht has not been trying Pastor Nadarkhani on political charges and by the end of next week at the final hearing the court could well decide to set Yousef free. The court magistrates in Rasht have heard Pastor Nadarkhani's abundant testimony about our Messiah Jesus Christ and according to his lawyer they are very likely convinced at this point that he is an innocent man. Let us maintain our prayer vigil for Brother Yousef, his family and the Christian Church of Iran.

08 July 2011: 32-year old Yosef Nadarkhani (seen above) is a Christian evangelical pastor from Gilan Province in Iran, along the southern shore of the Caspian Sea. Yosef has been a Christian since age 19, and is married with children. In October 2009 authorities arrested him after he objected to Islam being taught to Christian children in Iranian schools. The indictment levied against Yosef accused him of organizing Christian evangelical meetings, preaching the Gospel of Jesus Christ, asking others to invite Jesus into their hearts, using his house as a church and for "denying Islamic values." Yosef was put on trial, convicted of the indictments and has been sentenced to death by hanging under the charge of apostasy from Islam.

After his conviction Yosef appealed to the Iranian Supreme Court. That court has ruled that Yosef will have to return to the convicting court and face questioning. If the questioning determines that he does not believe in Islam, if he is not a Muslim, then he must renounce his faith in Jesus Christ before the court or be hanged by the neck until dead.

Brothers and Sisters, we have two tasks before us. The first is to pray for our Brother Yosef Nadarkhani, his family and his church. Pray that God's will is done; spare Yosef from a martyrs death and provide them all with the safety of His protection.

The second task is to correctly teach others who have been deceived by what Western media says about the "peaceful religion of Islam." We need to inform them that Islam (Submission) is in reality the total submission of the will of the individual human being to an utterly false god who has nothing to do with our God YHWH, the God of Abraham, Isaac and Jacob, the God of Israel, the Father of whom our Lord Jesus Christ was born to take away the sins of the whole world.

For the past 1,380-some odd years Islam has been an earthly manifestation of the powers we struggle against while wearing he whole armor of God according to Ephesians 6:10-18.

"Finally, my brethren, be strong in the Lord and in the power of His might. Put on the whole armor of God, that you may be able to stand against the wiles of the devil. For we do not wrestle against flesh and blood, but against principalities, against powers, against the rulers of the darkness of this age, against spiritual hosts of wickedness in the heavenly places. Therefore take up the whole armor of God, that you may be able to withstand in the evil day, and having done all, to stand.
Stand therefore, having girded your waist with truth, having put on the breastplate of righteousness, and having shod your feet with the preparation of the gospel of peace; above all, taking the shield of faith with which you will be able to quench all the fiery darts of the wicked one. And take the helmet of salvation, and the sword of the Spirit, which is the word of God; 18 praying always with all prayer and supplication in the Spirit, being watchful to this end with all perseverance and supplication for all the saints."

Clues to the Timing of Ezekiel 38/39 and other Insights 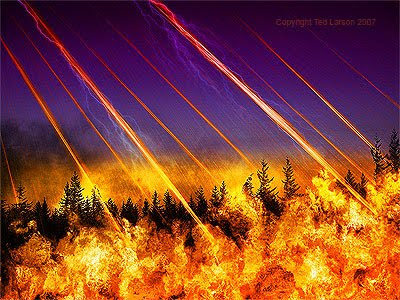 1 February 2012: I was immersed in serious Ezekiel 38/39 study into the wee hours this morning when new insights began to emerge that I'd not noticed previously.

Firstly, Ezekiel is the only prophet recorded in the Holy Bible to which God directly revealed the details about "Gog, of the land of Magog, prince of Rosh, Meshech, and Tubal, and prophesy concerning him."

None of the other prophets - Isaiah, Jeremiah, Daniel or Hosea, Joel, Amos, Obadiah, Jonah, Micah, Nahum, Habakkuk, Zephaniah, Haggai, Zechariah, and Malachi wrote so much as a single prophetic word about Gog of Magog. Zippo, Nada, None. The fact that the angel Gabriel said nothing to Daniel about Gog of Magog speaks volumes in my opinion. I would say the purpose of God the Father is inherent in this blatant omission. More on that in just a moment.

Secondly, when the angel Gabriel told Daniel (Ch. 11) about the kings of the south and north, that particular prophecy was fulfilled in the several wars between the Hellenic empires of Ptolemaic Egypt (south of Israel) and the Seleucid Empire of southwest Asia (north of Israel). These wars were fought over a period of 106 years (274-167 BC) and which culminated in the fulfilled prophecies about the precursor antichrist Antiochus IV Epiphanes.

There is no mention of the Antichrist or of Jerusalem or any existing Temple in Ezekiel 38/39. I believe these are indicators that the attempted invasion by Gog's confederation occurs during a period of time when Israel is dwelling securely (after Psalm 83, Isaiah 17 for example) but has not yet rebuilt the Temple. Like a time between right now and the start of Daniel's 70th Week and the revealing of the Antichrist with his 7-year "covenant among many."

Finally, getting back to the Lord's purpose in His prophetic word to Ezekiel. This is a really crucial point for us to consider. This coming great slaughter upon the mountains of Israel in Ezekiel 38/39 is not just to bring Israel back into faithfulness to God, but also, as the Lord declares in verse 16: (NKJV - emphasis added) "And thou hast come up against My people Israel, As a cloud to cover the land, In the latter end of the days it is, And I have brought thee in against My land, IN ORDER THAT THE NATIONS MAY KNOW ME, IN MY BEING SANCTIFIED IN THEE BEFORE THEIR EYES, O Gog."

Do you see that? God declares to Ezekiel - and to all of us living right now - that He will supernaturally reveal Himself to the gentile nations of the world through the overwhelming slaughter of Gog's entire confederated military forces and the fire He sends on the land of Magog.

First question: What purpose would there be to this for all of the gentile nations if it were not prior to the Harpazo?

And what does Ezekiel say occurs after the burial of Gog's confederate armies?

Israel builds the Temple.
Posted by Sean Osborne at 10:56 AM 27 comments: