Global SITREP C9-15: The Surest Sign of the "End of the Age" 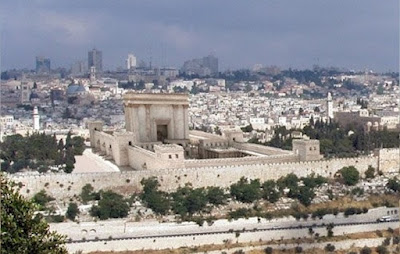 19 June 2015: Our LORD Jesus Messiah began His Olivet Discourses virtual checklist of prophetic end times signs by pointing to the Temple on Mount Moriah and prophesying to the apostles that it was soon to be destroyed with not one stone to remain standing upon another. This prophecy came to pass exactly as described by Jesus 37 years later on 10 August (9th of Av) in 70 AD.

How appropriate would it be then for the Temple of the 70th Week to have its construction, completion and worship services commenced prior to the advent of the angel Gabriel's prophecy about Israel's 70th Week? I believe the Word of God Himself in the text of the Holy Bible tells us this will be the case.

Therefore, a standing and fully-functioning Jewish Temple on Mount Moriah would be the greatest physical sign of the imminent arrival of the final seven years of human history as we have known it since Jesus' own death, resurrection and ascension into Heaven and the rebirth of Israel in fulfillment of Isaiah 66:8.

John the Revelator writes in the first three verses of Chapter 11 the revelation which  God gave to Jesus who made it known to the angel who presented it to John:


"I was given a reed like a measuring rod and was told, “Go and measure the temple of God and the altar, with its worshipers. But exclude the outer court; do not measure it, because it has been given to the Gentiles. They will trample on the holy city for 42 months. And I will appoint my two witnesses, and they will prophesy for 1,260 days, clothed in sackcloth.”"

Here is a standing and fully functioning Temple at the very commencement of the 70th Week, upon the Lord's appointing the Two Witnesses to commence their prophesy and ministry for the 42 months (1,260 days) of the first half of the 70th Week.

Look at the grandeur, spectacle and sheer size of the Temple as imagined and scaled to correct proportions above.  How long does it take in this era to prepare the ground and layout all of the requisite necessities for the construction of such a Divinely ordained structure such as this? 12 months? 2 years? Three? More?

The point is that a structure such as this will require a schedule and an executable plan to complete. Other religiously ordained things are required to place it into actual service, and they will require a certain amount of time also to complete.

Whatever these unknowns amount to in linear time, one thing is certain, all of these activities will all occur prior to the start of the 70th Week, as well as all of the logisitics which are necessary to make such a construction effort even possible. The Harpazo can occur at any moment, yet there is also the distinct possibility that the Bride of Christ will be witness to the prophetic events, such as the fulfillment of the Psalm 83 war, which are prerequisite events to any of this occurring.

As the text reveals, the "times of the Gentiles" are still in progress when the Two Witnesses begin their appointed and prophetic ministry and the construction and completion of the Temple structure occurs.

9 June 2015: Everything is under our LORD's complete control and subject to His appointments and times. In this SITREP, over the new day or so, I will touch upon the events which are occurring in various places around the planet that are relative to our expectations in interpretation of His prophetic Word.

The number one issue in this regard remains the Shi'a Twelver-run Islamic Republic of Iran, also known as Elam in Jeremiah 49:34-39 and Parac (Persia) in Ezekiel 38-39. The flash points at this time are its expansionist war in the Republic of Yemen, its nuclear weapons program, the civil wars in Syria and Iraq, and Lebanese Hezbollah. Iran is the primary focus of the military forces of the Sunni Arab nations at this time. It is a focus that has led Israel and Saudi Arabia to conduct secret discussions on what will be done to address the threat Iran poses to their common interests - namely, survival. Any one of these current issues has the potential to ignite preemptive strikes by Israel and/or the Sunni Arab military coalition against Iran. The upping of the ante in this regard occurred this weekend when Iran's proxy force in Yemen launched a SCUD missile attack on the King Khalid Air Base in southernmost Saudi Arabia. The Saudis shot the SCUD down with an American Patriot missile battery.

I would also tie the fate of Damascus to these developments, but we already have a current and up-datable SITREP C4-15 tracing the prophetic impending demise of the ancient Syrian-Aramean capital city. There is something else going on in Syria which caught my eye: Iranian IRGC/Qods Force officers have begun summarily executing Sunni Muslim officers in Bashar al-Assad's remaining army on the front-line battleground around the city of Idlib. These officers found themselves and their troops to be in defensible positions at the nearby checkpoints at Mahmbel and Bsanqoul and conducted a tactical retreat towards better positions closer to Idlib. The Iranian's declared this action to be a "betrayal of the homeland" and executed the Syrian officers. This kind of treachery guarantees defeat for Assad's forces, mass defections to the rebels, and retribution against the Iranian officers now running the war in Syria.

These issues, in fact the entire state of the world in general, have caused something unprecedented to occur within U.S. military and civilian intelligence circles. In the decade of years previous to 2015, a highly respected, widely but privately distributed and obviously widely read (US/EU and Israel) Open Source intelligence report (based in the Washington DC/Northern Virginia area) which previously would never have published so much as a single word regarding Bible prophecy about these 'last days' nor acknowledge any validity whatsoever regarding Bible prophecy of near-future events, has suddenly reversed its editorial and content position and begun including Bible prophecy articles and advertisements heralding prophecy conferences all over the world!

Along with the usual updates on events on the  Syrian civil war, Islamic State, Iran, Russia, China, EU the US and the plethora of other issues that keep current and former intelligence professionals well-primed via its daily ListServe emails, there is now a steady stream of reports and articles about the same kind of prophetic issues you are reading here and at other Bible prophecy websites and blogs. In fact, on Monday, the entire chapter of Matthew 24 was published with an active link to the Biblegateway.com NIV webpage. God is at work brethren!

Contrary to the beliefs of many, and directly related to the Ezekiel 38/39 prophecy, the Russian Federation is not as militarily powerful as is currently being claimed. Yes, they have nuclear weapons, and, yes, they have several divisions of modern, upgraded armor, aircraft and naval ships and newly uniformed soldiers, sailors and airmen, but to use a metaphor, that is just the shell of an egg of the Russian army. Inside that egg is a gelatinous mass that is anything but threatening and certainly not capable of sustained warfare far from the Russian homeland.

Consider what Ezekiel 38/39 actually says and view this prophecy in the context of the prophesies which have come to fulfillment just ahead of it. Essentially the Lord is telling us that when Russia and its pathetic military allies come against and suddenly fall dead upon the mountains of Israel - this is a "one and done" type of military operation!! Look closer at the text. There is no second wave, there is no retaliatory strike, there is no long-range missile war of attrition. There is nothing but death and destruction for the invaders.

Also, consider the words of "Sheba, Dedan and the merchants of Tarshish and all their young lions" in this major 'last days' prophecy. Are these the words of a weak military alliance, or are they actually the long misinterpreted words of incredulity from a strong alliance regarding a Russian-led attempt to invade and conquer modern-day Israel and Jordan? "Have you came to take a spoil" could be interpreted in modern parlance as "What? Are you kidding me?!" These same Arab/Western allies are very likely to be the same military forces which had reduced Iranian military capabilities as prophesied in Jeremiah 49:34-39.

What is likely to occur is that upon Russia's total defeat in Ezekiel 38/39 fulfillment the forces of the West will expand to secure whatever advances Russia has recently made, or will yet make in the near future, in Ukraine and the Crimea. Geo-political power vacuums are always filled by the dominant military power at that time. As it was in the days of ancient Rome, Western power is likely to be returning to the regions around the Black Sea as the very basic map below illustrates. Is this illustration not what Bible prophecy predicts to be the geo-political reality for the 70th Week?