Turkey Has Left the West and Joined the Magog Axis 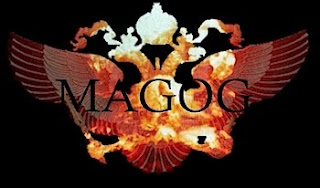 18 October 2009: This week bore witness to what Bible eschatologists and Christian watchmen have been warning about for years : the inevitable and unequivocal defection of Turkey from the NATO military alliance in favor of the military alliance identified by the ancient national names of Ezekiel 38-39 and best known as the Gog-Magog Alliance. With ever increasing rapidity Bible prophecy is being fulfilled. The Bride of Christ has taken full notice while the secular institutions which surround all of us in the West and in Israel officially remain blissfully ignorant if not wilfully unconscious.
Turkey not only unceremoniously bounced Israel out of a longstanding annual airborne 'Anatolian Eagle" military exercises, but it cemented a new military alliance with Israel's arch-enemy and continuing state-of-war belligerent in Syria. This new military alliance enjoins the Turks and Syrians to another new military alliance between Turkey and Iran against the Kurds of northern Iraq and along Turkey and Iran's common border south of Armenia. Last February the new Turkish and Iranian strategic alliance was highlighted in the MEMRI Special Dispatch No. 2248. Again, none of this is news to the Bride of Christ. We've been warning about it for years.
Posted by Sean Osborne at 6:20 PM 10 comments: 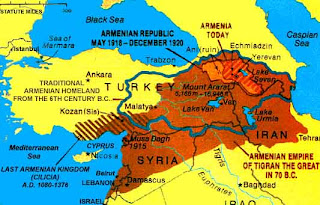 11 October 2009: In the news this weekend is the historical geo-poltical and prophetically significant accord establishing the required protocols for full diplomatic relations between the ancient Armenian and Turkish peoples. The significance of this accord underlies the eschatological position of Eschatology Today that Armenia is without question one of the nations identified as belonging to the Gog military confederation to become existent in the 'last days" per the Spirit-inspired prophecy of Ezekiel 38-39.

Armenia (see map above) is one of the nations named by Ezekiel which many eschatologists have thus far erroneously applied in an interpretation of Ezekiel 38:6 as being modern eastern Turkey. Armenia is, in Biblical fact, a nation descended from and identified as both Gomer and Togarmah!

In historical point-of-fact, the Armenian nation predates by a few thousand years the establishment of a Turkish state in Asia Minor. It is in ancient Armenia, historically centered around Lake Van, that Noah's ark came to rest on Mt. Ararat after The Flood. The Armenian's have for millennia held the belief that they are the direct descendants of Noah's son Japheth through his son Gomer through one of his descendants known by the name of Haik. Haik (pronounced "high,") is name the Armenians use to identify their own nationality). Haik was the son of a man named Togarmah. Also in ancient times Armenia was known as Urartu (Arartu) by the peoples of this northern Middle Eastern regions, and as the Kingdom of Ararat in the Old Testament. The Kingdom of Ararat was named in Jeremiah 51:27 along with the ancient nations of Minniy (a part of Armenia) and Ashkenaz (a nation in the same region also descended from Japheth).
The Armenia of the 21st century is a country overwhelmingly populated (98.7% according to the CIA World Factbook) by "Christians" (Armenian Apostolic and other Christian denominations) and is a full member of the Russian-led military alliance known as the Collective Security Treaty Organization (CSTO) discussed in the Eschatology Today entry of one week ago. Ratification of the normalization of relations treaty, pending Armenian withdrawal of its troops from the enclave of Nagorno-Karabakh in overwhelmingly Muslim Azerbaijan; the status of roughly 600,000 Armenian and Azerbaijani refugees, as well as the issue of Ottoman Turkish responsibility for the genocide of over 1 million Armenians at the end of WWI will be the final step in this very prophetic development prefacing the literal fulfillment of Ezekiel's war of Gog/Magog and the ultimately full restoration of Israel to the land given it in the unconditional Abrahamic Covenant of the Lord, as described in Genesis 12:1-3 and Genesis 15:18-21.
We are truly a blessed generation to be witnessing the literal fulfillment of Bible Prophecy. We are the generation of whom our Messiah spoke in Matthew 24. Despite all the seemingly apparent odds against and the seemingly impossible conditions to be overcome - as our Lord said, "these things must take place."
Posted by Sean Osborne at 10:03 AM 4 comments: