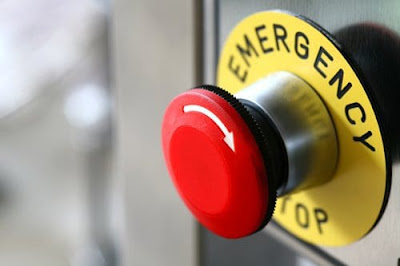 22 August 2019: Jesus told us to "Watch therefore, for you do not know what hour your Lord is coming." (Matthew 24:42) Been doing nothing but that, and especially of late. If you're watching in like manner as I, then perhaps your thoughtful prayer has been something akin to, "Lord if not now, then is there an emergency stop button for all the madness, lawlessness and hate in this world." Never before have I seen in my lifetime the things which have occurred in the past month. Surely the spirit of the antichrist has gone into overdrive of late, it is so blatant, so in our face, that there may be some feeling like the Corinthians did when Paul addressed them in his second letter.

Well, we all know God is in complete control and there is no emergency stop button. Instead there is the Harpazo, and that blessed hope is anything but an emergency stop. Instead it's a full speed ahead throttle for all manner of things to get drastically worse. Imagine what would occur if the Harpazo occurred tomorrow. In Portland, Oregon or any large city, such as Philadelphia, Baltimore, LA or San Francisco where the Antifa domestic terrorists and other lawlessness and abject, depraved filth runs rampant; where law enforcement all but stands down because the socialist politicians who run such places really want that kind of mayhem as it suits their purposes very nicely indeed.

I think we all agree that in a post-Harpazo America the very perception safety and security would rapidly go right out the window. That's what I saw this past week where the Philly PD had just rescued approximately 80 kids, aged 6 months to 10-years old, from a drug crazed radical Muslim with an AK-47 shooting wildly out the window, were turned on by the local residents because the LEOs had just shut down the neighborhood crack house. Forget the safety of the children rescued, they wanted their crack. It was big news, carried live on TV for hours on end, and then once facts were known the media pulled the plug; the facts weren't anything close to the image they wanted to present on American TV.

And you know what, this is just the tip of a monstrous iceberg that is pulling up right alongside the SS United States ship of state. The opposition Democraft party willl not only not denounce Antifa insurgents on our streets, but they're doubling down on the effort to remove President Trump from office. And I mean they want to remove him by any means at their disposal. Not the first time I've said this here, hopefully it will be the last time.

Meanwhile, across the oceans there are strong indications that the prophetic Psalm 83 scenario is very close at hand. Violence is very likely to begin within hours on the Gaza front, and Palestinian Islamic Jihad announced this week that they are at war with Israel. And Israel has suddenly made clear that its forces are operating in central Iraq against the Iranian PMU terror proxies under IRGC-QF control. Most interesting thing here, as it relates to Psalm 83:8, is that these very stealthy IDF attacks are occurring in the area formerly known as the Sunni Triangle north of Baghdad. Why the Iranians have based their Shi'a Iraqi proxies in this particular region is no great mystery either. Nevetheless for a few weeks now the Israeli attacks have been devastating.

In Syria, the battle for Idlib is fast approaching another crisis point because the accords which Russia and Turkey reached last spring now to have collapsed. Turkish forces crossed into Syria and Syria dropped bombs as a shot across the head of the column. Russian and Turkish jets nearly clashed overhead this past week. And the expected crisis in this area, per our interpretation of Jeremiah 49:23, remains very much a crisis point.

Then there's a series of massive explosions that have occurred recently in Russia. The most significant was one which involved a weapon that was either nuclear powered or had a nuclear warhead, or both. The primary Russian radiation monitoring stations in this region have suddenly gone silent in an attempt to keep the lid on this disaster as was done in the Soviet days at Chernobyl. However, the radiation that resulted from the explosion was recorded and it was significant. There was also the recent secret submarine mishap plus a series of explosions that all but leveled the weapons depot and nearby towns.

8 August 2019: The abduction and murder in Etzion last night by HAMAS operatives of 18-year old yeshiva student, Dvir (Yehuda) Sorek, who also had just begun his stint of service in the IDF, stands a very good chance of igniting a significant, if not defining, final act of the ongoing Psalm 83 war (1947 to Present).

HAMAS claims Dvir's murder was a "powerful response" to discussions in Israel about the annexation of Judea and Samaria. In reality, Dvir's murder makes the annexation of Judea and Samaria more not less likely, and by force of arms more than likely. HAMAS also reiterated its goal of expelling "the occupiers" from all of Jueda and Samaria. Palestinian Islamic Jihad, Tehran's patron, referred to this murder, which some of its operatives may have also participated, as "heroic."

At the present time none of the major political parties in Israel are talking about the establishment of a sovereign Palestinian state, the so-called two-state solution. What Likud, Labor and the Blue and White List are all talking about is separation of the the Palestinians from Israel. This separation is being accomplished by the building of walls. Walls around settlements, walls that divide highways straight down the middle. Walls that separate the citizens of the State of Israel from the areas and transportation nodes of the "Palestinians."

This is now. Taking a snap-look forward to a time nearing and soon to become a present reality, how does the God-breathed prophecy of Ezekiel describe the land of Israel's habitation prior to the Magog's attempt to invade?

‘Thus says the Lord God: “On that day it shall come to pass that thoughts will arise in your mind, and you will make an evil plan: You will say, ‘I will go up against a land of unwalled villages; I will go to a peaceful people, who dwell safely, all of them dwelling without walls, and having neither bars nor gates’— to take plunder and to take booty, to stretch out your hand against the waste places that are again inhabited, and against a people gathered from the nations, who have acquired livestock and goods, who dwell in the midst of the land."

Unwalled villages inhabited by peaceful people dwelling safely, all of them dwelling without walls, bars or gates in the midst of the land. This is certainly not the Israel we know today, but it will be the Israel that exists immediately prior to the events of Ezekiel 38/39.

Do we recognize that this complete lack of walls, bars or gates not only refers to the midst of the land of Israel, but also includes the rather significant defensive walls, bars and gates currently surrounding Gaza? They're going to be coming down, and soon. This is what the Lord GOD through Ezekiel is telling us if were willing to listen. The future reality well ahead of the time in which it will be.

Isaiah 11:14, as has been discussed here several times previously, directly links Israel's military coming conquest of the terrorist-controlled Gaza with a simultaneous military conquest of most of western Jordan. This near-future reality, is reflected in the map at the top of this SITREP. The only missing piece in this map is the area to the southeast of the Dead Sea, that too will be Israel. And it will occur, as Eschatology Today believes, before Ezekiel 38/39 takes place. Ditto for Isaiah 17 and Jeremiah 49:34-39. All of this constitutes a very big paradigm shift if not a geo-political tsunami for the Middle East, which won't come even close to looking like it does today.

So, let's see how this new developing paradigm takes shape before our eyes and falls in with the marching cadence set by the Lord's prophets so long ago.

Global SITREP C6-19: It Is Sentient

2 August 2019: The vast array of next generation military hardware is upon the world two decades into the 21st century, and seemingly right on time for the advent of the 70th week of years. More kinetically lethal, vastly more destructive, and deliverable on a global scale that was in the realm of science fiction not that long ago.

But what we're probably not ready for is the knowledge that all of that technological wizardry of warfare, from intelligence collection of the minutest detail, to the real-time dispatch of automated, artificially intelligent (AI) 'strike packages' anywhere on the earth within minutes, controlled by an artificial intelligence that is most assuredly 'next level.' An AI that is in every sense of the word a virtual sentient being.

The reference here is to a machine that has attained consciousness of itself and everything else in the world via the streams of terabytes of data flowing into it from all manner of sensors in orbit, in the air or in other ways attached via a virtual neural network we call the world wide web. It's name is Sentient because it is sentient. It's no longer science fiction because it's here now. Sentient is an omnivorous consumer of all kinds of data; it is aware of the past, present and can anticipate the future.

And there are still some folks who deny we're living in the last days. Little do they know that they'll soon be enslaved by Sentient and the dark, demonic forces that will control it.

If anything can make some sense of the prophetic text of Revelation 13, this can. There's the Antichrist, the beast, and the False Prophet, having the appearance of a lamb but speaking as Satan. And the Antichrist will be wounded by a weapon so severely to his head that his survival will be considered completely miraculous. And the false prophet, in verse 14, tells mankind to make an image of the beast, and in verse 15, by satanic power gives breath (GK:pneuma meaning breath of life) to the image of the beast, and it will speak (articulate words) to the world and have the ability to kill anyone refusing to worship itself. It will force the economic 'mark of the beast' upon the world at that time.

Sentient will look like at man at this time, not like a box box computer. And as the prophet Daniel foretold and Jesus reiterated (Matthew 24:15) this Sentient image of the Antichrist standing the the Holy Place of the coming Third Temple will be the "Abomination of Desolation." This is where the Thlipsis (Tribulation) ends 3.5 years into the 70th week of years and the Megas Thlipsis (Great Tribulation) of the final 3,5 years begins. Oh, and by the way, Sentient is 'made in America.'

This SITREP is primarily for those who unfortunately did not accept the free gift of Salvation purchased by the shed blood of Christ Jesus and find themselves 'left behind' after the Harpazo has occurred. The dark powers descibed above are very close, if not understated, that they can expect to have to deal with during the final 7 years preceeding the Second Coming of Christ Jesus. Choose Christ while there is still time to do so!
Posted by Sean Osborne at 12:07 AM 18 comments: