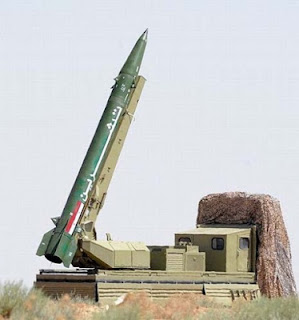 19 May 2013: Numerous reports, many with confused or inaccurate details, more or less concur with the premise published in The Sunday Times of London, Jerusalem Post, the Times of Israel, YNet, etc, that the Syrian Ba'athist regime of Bashar al-Assad is now targeting Tel Aviv, Israel with the same type of Short Range Ballistic Missiles (SRBM) that it has been unsuccessfully attempting to deliver to Hezbollah since late January.  The media reports refer to these SRBMs as the Tishreen (seen above), and that name is merely another Syrian nomenclature for the Iranian-made Fateh A-110B. The previously acknowledged name for this missile is the M600. This variant is reportedly accurate enough to strike within 109 yards of its target; it is a single stage, solid propellant-powered missile with a 200-mile range fitted with a 500 lb high explosive warhead. The Iranian-made Fateh A-110 is itself a guided version of the also Iranian-made Zelzal-2 liquid fueled missile, which itself is based upon the Russian-made R-65 FROG.
Given the reported range of this missile all of the fixed and road mobile batteries must be located in Syria no further north than the border between the Dimashq and Homs governorates on the map below. This significantly narrows the areas which Israel would need to keep under constant overhead (i.e. satellite) surveillance.

Also note with respect to the above map, the southern-most Syrian governorate Quneitra (yellow) is the Golan Heights that has been militarily occupied by Israel since the Yom Kippur War of October 1973.

The "Tishreen" SRBMs are reported to be advanced missiles. However, that advancement is relative to the level of advanced ballistic missile technology and warhead accuracy possessed by the Islamic Republic of Iran, which are fairly accurate, but nothing near that found in Israel's missile inventory. If this report is accurate and the Syrian missiles are imaged in launch position, then another round of preemptive strikes by the IAF could occur at any time. The real question is whether or not Bashar al-Assad is willing to risk the survival of his regime and the whole of Syria on another attempt to supply these missiles to Hezbollah. That is a risk only a defeated tyrant could be expected to take.

Global SITREP A11-13: No 'Game Changer' for Hezbollah/IRGC 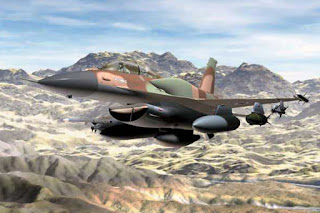 IAF F-16I Sufa
After Action Update 7 May 2013: There are more articles, Op-Eds, speculations, and just plain wild-donkey guesses on what has occurred, what has resulted and what will happen next between Israel, Syria, Lebanon (Hezbollah) and Iran than anyone can shake a stick at.

Nobody can possibly predict what will happen in the next 24-48 hours because no one knows through the current fog of war what has just taken place in its totality.

The very best that can be said is that absolutely surreal and total chaos reigns supreme around Damascus, Syria.

This surreal chaos was captured its best and rawest form through a video which was obviously recorded by anti-Assad jihadist rebels of the assault that occurred on the western slopes of Mount Qasioun, the slopes that are on the far side from Damascus, facing Hezbollah and Iranian controlled central Lebanon.

In this video, posted in its raw form on YouTube, the rebels are heard in the audio track whispering and then shouting the Islamic takbir "Allah-hu Akhbar" (Allah is Greater!) as Israeli Air Force F-16I Sufa strike aircraft fire rockets and drop very large ordnance that erupts in tremendous explosions, thunders, pops and a massive fireball which turned night into day and whose shock-wave registered a 4 on the Richter scale for seismic activity. This same video was replayed endlessly on US evening news reports Monday night but without the accompanying Islamic jihadist soundtrack.

What can possibly emerge out of such utter chaos than a more unprecedented chaotic result? I think we all know the answer to this, but we're all still holding our collective breath less we speak the unspeakable horror that will result from a fulfillment of Isaiah 17 in the next few days. I am only reminded and reassured of Jesus' prophetic words concerning these very wars and rumors of wars: "See that you are not troubled; for all these things must come to pass, but the end is not yet." (Matthew 24:6 NKJV)

UPDATE 05  May 2013: The missiles that Israel has struck in Syria between Friday and early this morning is the subject of the update to this SITREP.  These missiles, according to most main stream media reports are Fateh-110's that were allegedly struck in a warehouse at Damascus International Airport, and which also reportedly would constitute a "game changer" have been in Hezbollah's possession since January 2010 in Lebanon according to Israeli media report (Naharnet) that was confirmed by the IDF. These same missiles, which are also known by a different name (M-600) were transferred to Hezbollah from Syria and made operational three years ago.

This advanced missile transfer wasn't a "game changer" three years ago, but it is today? Sorry, but I'm not buying that story - there is something much bigger going on that would suddenly get Israel to do what it did this past January, and again this past Friday morning in Damascus, and - based upon new information - a third massive attack has just occurred in the same Qudssaya area west of Damascus that was hit in January. I was going to update this SITREP with the new info, but how do you update something that was news from my perspective on this blog three years ago? Just because the MSM wasn't paying detailed attention to those critical events is not something I'm going to worry about now.

So, for the bulk of this update to the current situation I must first direct your attention "back to the future," to the report I researched and posted here on Eschatology Today three years ago:

So what could the "something much bigger" be that has caused Israel to determine it had collected, analyzed and decided it must now act upon as a "red line" too far?  I believe that Israel, perhaps with American assistance or perhaps not, but certainly with American concurrence, has determined that Iran, through their Hezbollah/IRGC forces in Lebanon had made final preparations to attack Israel's Dimona Nuclear Power Plant with the missiles and advanced warheads that are being struck in their staging areas around Damascus.

I think the key part of the intelligence assessment that made the determination were the two Iranian drones which were shot down, the first as it flew across the Negev Desert towards the Dimona NPP complex on October 6, 2012, and the second just 9 days ago as it flew south along Israel's Mediterranean coastline off Haifa. Israel's Prime Minister Benjamin Netanyahu said at the time of the second Iranian drone shoot-down that he viewed the situation with the "utmost gravity." This morning that gravity appears to be pulling Israel and Syria towards the full-scale war I believed "The Syrian Missile Crisis" was going to provoke three years ago. What Syria does in the next few hours or days may well determine if we will be witness to the fulfillment the prophecy concerning Damascus, the rest of Syria, the cities of northern Jordan and northern Israel found in Isaiah 17.


04 May 2013: The Israel Air Force appears to have launched another precision strike package against an anti-aircraft missile depot located somewhere in western Syria. However, the IAF has suddenly changed its tactics in launching a strike inside Syria by using only stand-off, 'fire and forget" air-to-ground missiles. No IAF strike aircraft actually entered Syrian airspace on this mission flown very early Friday morning. The F-16I Sufa strike package apparently launched their missiles from the skies over northern Israel and Lebanon at the distant targets.

As reported in Global SITREP A9-13:

"Speaking of steroids, the GBU-39A/B is a flechette-on-steroids of high precision, high lethality, low-to-no-collateral damage aerial weapons. A dart of a bunker buster, if you will. This is the state-of-the-art weapon Israel could immediately deploy on its F-16I Sufa strike aircraft to hit nuclear related bunkers or human targets in downtown Tehran and barely disturb the person sleeping in the building next door. The US has had these weapons since 2008, and now, just five years later, Israel will get the GBU-39A/B too.

The GBU-39A/B is light, only 285 pounds - but it has a high explosive (blast velocity = 5 miles per second) warhead that weighs 205 pounds. This bomb is more than 2/3rds high explosives. Makes a bad day for the bad guy his last day on earth no matter where he is hiding from a launch point that is 60 miles away - and that is well outside the range of most point air defense systems Iran or Syria possess. Additionally, this weapon's guidance system cannot be jammed or spoofed."

I'd assess that since an anonymous US official announced this strike before an IDF spokesperson did that our guy was in effect taking credit for a strike on advanced anti-aircraft missiles that a joint intelligence operation had determined were destined for delivery to Hezbollah in Lebanon. As in the 1 February 2013 strike on the Qudssaya military depot in the Western Damascus suburb (see The "Morton Salt Scenario"), perhaps these new anti-aircraft missile systems are intended as payment for the sacrifice Hezbollah and IRGC troops are making for the Al-Assad regime's fight against Jihadist Sunni rebels all over the Syrian countryside.

With respect to that strike on Qudssaya, after-action analysis of photography issued by the Syrian government itself revealed perhaps a dozen or more completely destroyed Russian-made SA-8 (NATO-Name: Gecko) 9K33 Osa (Wasp) tactical surface-to-air missile systems, an example of which is seen in the image below. 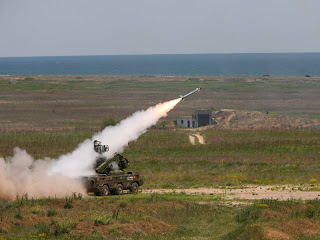 Hezbollah and the IRGC in Lebanon currently have nothing like this very capable and battlefield proven point air defense system in their known inventory. The introduction of this system into the valleys of Lebanon might constitute a tactical "game changer" situation for Israel in the coming war with Hezbollah and the IRGC. Israel appears to have launched two strikes to prevent the transfer of either the Syrian SA-8 systems or WMD materials to the enemy forces in Lebanon. The first was that apparently bottle-necked convoy of SA-8 Gecko systems, and this one a fixed, non-moving target such as a warehouse. There is no information which indicates the GBU-39A/B can strike a moving target like a convoy. As expected the next IAF strike or series of strikes could occur at any time, as could a Syrian or Hezbollah/IRGC response against Israel.  Whatever the case, the war is in progress and we're watching it closely. An update on the actual location of the IAF airstrike will be made when it has been determined.