Don’t Tread On Me: The Second American Revolution 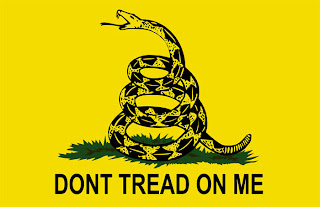 30 JULY 2010: A storm has been brewing for some time now in all levels of the American populace. Ever since the day that Barack Hussein Obama opened his “Office of the President-Elect” and then actually succeeded in usurping the office of Chief Executive and Commander-IN-Chief, there have been ever increasing rumblings across this great land. So much so that from the Atlantic to the Pacific coasts the American heartland has been bubbling with words not heard since our Founding Fathers cut colonial ties with Great Britain, and several southern states rebelled over the issue of State’s Rights. Join or Die. Don’t Tread On Me. Tea Party. Civil Disobedience. Secession. Revolution. The elite in Washington, D.C. would have to be deaf, dumb and blind not to see this coming.
And it just got easier. In yesterday’s issue of The Washington Times, Jeffrey T. Kuhner wrote an opinion piece entitled “Should Arizona Secede: Choice between devolution and dissolution may be inevitable.” Previous top-notch OpEds by Kuhner include: “President’s socialist takeover must be stopped,” and “Who Lost Afghanistan.” However, it is yesterday’s article which clearly shows where the “rubber meets the road” in America today, that a breaking point is all but inevitable when the will of “We The People” is usurped, over-ridden or ignored one time too many.
Jeffrey Kuhner’s concluding paragraphs lay it squarely on the line.

“For too long, liberals have successfully used the courts to impose radical social engineering upon a recalcitrant population. Abortion, homosexual marriage, pornography, racial quotas, affirmative action, a ban on public school prayer – all of these issues have been imposed by an imperial judiciary against the wishes of the majority. The Arizona law is the reassertion of democratic self-rule against the federal leviathan.
Arizona is where the old republic will stand or fall. It is showdown at high noon. Either America returns to its constitutional system based on real federalism, states’ rights, individual liberty and decentralized power, or it continues to slide toward the darkness of a socialist superstate. Washington – with its swollen bureaucracy, imperial arrogance, rampant corruption and dangerous detachment from ordinary citizens – is despised and distrusted by many Americans. A secession of the heart is taking place – a profound alienation from the liberal ruling class.
In the future, many states – including Arizona – may decide they have no other option but to break away from the union. The choice is becoming starkly apparent: devolution or dissolution.”

It is just a few more months until national mid-term elections occur and the will of the people is manifest. This coming election will go a long way in determining America’s near-term future, and what precisely need be done to ensure our God-given right to restore this Republic to the law of our Constitution. One way or another it is to going to happen.
Posted by Sean Osborne at 1:33 PM 16 comments:

19 JULY 2010: Not quite 6 weeks ago, between 7 and 9 June, an Israeli delegation attended a briefing given by the NATO Program Office for the Active Layered Theater Ballistic Missile Defense System (ALTBMDS) Operational Users Group, led by the United States, Germany, Italy, Poland, the U.K., France, Holland and Canada.
The briefing brought the Israeli's up to speed on the current and future capabilities of the NATO ballistic missile defense system. At the same time the NATO side was briefed by Israeli Brigadier General (Ret.) Eitan Yariv on Israel's Ballistic Missile Defense (BMD) system.
Obviously, the two systems were immediately recognized to be mutually compatable and would provide an immediate increase in joint capabilities against hostile ballistic missile threats against Europe, Israel and forward deployed NATO forces in the Middle Eastern theater of operations (Operation Enduring Freedom). Without question the Islamic Republic of Iran, with its Shahab-3/4/5 family of ballistic missiles, is seen by all parties as the primary emergent threat. Syria and newly ballistic missile-armed Hezbollah in Lebanon are second tier emergent threats.
It is no big surprise, therefore, to see operational in Israel today a jointly-manned American and Israeli operations center featuring the ground-based center-piece of the NATO system, the AN/TPY-2 radar seen in the image above. Israel has not only integrated its defenses with the American systems in theater, but now has integrated with those of NATO on the European continent. Any launched ballistic missile threat within 1,900 miles of these allied territories will be rapidly identified, the specific launch point located and the incoming warhead destroyed. The effective range of this system is likely limited only by the overhead postion of the space-based element of the networked system and the location of most forward deployed elements of the actual interceptor missiles - most likely located outside of Europe in Israel, Kuwait and Afghanistan.
Posted by Sean Osborne at 8:55 AM 2 comments: