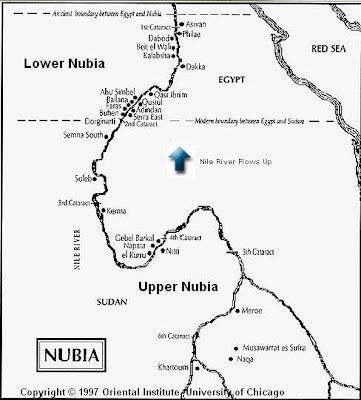 UPDATE 07 September 2011: An enlargeable map of the world circa the 10th century BC that is also quite useful in locating ancient Kuwsh can be accessed HERE.
2 September 2011: In this post I hope to provide some Scripture-based insight to correct a long-held misidentification of the land of Cush. This is an important distinction that directly relates to current events and what will shortly transpire, I believe, following the fulfillment of Psalm 83 and just prior to the commencement of Daniel's 70th Week.
To begin with, who was Ezekiel? Ezekiel was born in Jerusalem around 622 BC, he was a Kohanim Judean priest of Yahweh and was His prophet. Ezekiel was inspired directly from God. Therefore, Ezekiel directly and infallibly spoke the LORD God's prophetic word.
What we know as the country of Ethiopia is not mentioned whatsoever in Ezekiel 38:5. I believe the naming of Ethiopia in this context is a long-standing interpretive and eschatological error.

Ezekiel 38:5, written in the original Hebrew, is as follows: "Persia (Parac - pronounced Pah-rass), Cush (Kuwsh - pronounced Koosh), and Put (Puwt - pronounced Poot), with them, All of them [with] shield and helmet."

These peoples are, firstly, the original eastern Persians, as opposed to the Elamites who lived just east of Mesopotamia, or the Medes who lived to the north. We also have the Puwt who are the North Africans to the west of Egypt all the way to present day Mauritania. Yet it is the Kuwsh who are our focus here, and they are the direct descendants of Ham's son Kuwsh, the grandson of Noah. Isaiah 18:1 tells us where they lived "along the rivers of Kuwsh" which are located in the modern-day nation of Sudan directly to the south of Egypt. The "rivers of Kuwsh" are: (see map below)
1.) the Nile River,
2.) the White Nile River
3.) the Blue Nile River

Again, at present time there is a direct anti-Israel military connection between Iran (Persia), Sudan (Kuwsh) and the newly emergent Islamists of Libya (Puwt), Tunisia and Algeria (North Africans). We don't have to wait for anything to occur in Ethiopia as the southern branch of Gog's military alliance already exists today.

In ancient times this land was also known as Nubia (as seen in the map at the top) and in many respects was as advanced as the Egyptians of that ancient era. The Nubians were allies of Israel as proven by Isaiah 37:9-38 and 2 Kings 19 which both are a record concerning the invading Assyrians and the alliance between King Hezekiah and King Tirhakah of Kuwsh.
This is the ancient land of Kuwsh (Cush) identified in Ezekiel 38/39.

UPDATE 5 September 2011: In these last days is it not an obvious manifestation of the LORD God's Divine will that this land has been divided into two distinct nations? Of course it is, but how many have made note of this occurrence? It came about after the course of events of the past 55 years, with active armed rebellion and resistance between 1955 and 1972, and from 1983 to 2005. The LORD's will became manifest just about two months ago, on 9 July 2011.

The northern part of Kuwsh, a land divided by the three rivers identified above, is an Arab Islamic-ruled abomination which fervently seeks Israel's destruction, as mentioned above and ultimately to be manifest in the prophecy of Ezekiel 38/39.

The southern part, now known as "South Sudan" with a population of over 8 million souls and its capital city further to the south at Juba, is a fervent supporter of Israel. This nation is largely the product of Christian missionaries - Christian soldiers - who over the past century of time literally executed the Great Commission of our Lord and Savior Jesus Christ.

And now another relevant and obvious question for us all to consider:

1.) Does this new fact in our world not have a direct link and provide new insights to the prophecy of Isaiah 18? Is the harvest spoken of in Isaiah 18:3-5 a reference to the Harpazo/Rapture?