10 May 2020: This SITREP is a follow-up to the Eschatology Today original "The Kings of the East" published in October 2010. All of the same Scripture references in that post apply in Part II. Another excellent point of reference is found within 'The Nations in Prophecy' by John F. Walvoord, published January 1967. Chapter 12 is entitled "The Kings of the East: The Oriental Confederacy."

There's a lot of speculation and think-tank products going around since the Communist Chinese SARS-COV-2 global pandemic erupted in late January of this year. With many world governments now holding or threatening to hold the People's Republic of China accountable for the outbreak in allowing its infected population to disperse around the globe in advance of the Chinese New Year celebrations (Jan 25, 2020) without any advance warning, there appear to be days of reckoning coming soon. How the ruling Chinese Communist Party in Beijing may respond is the subject of many speculations. Some of them appear to mesh very well with Scripture on the subject.

We'll have to see how things transpire, but one of the most recent military scenarios has Bejing using the 12-million strong People's Liberation Army (PLA) to lash out against global COVID-19 retribution. The retribution is primarily led by the removal of the American market as a primary source of economic growth, thereby driving the economy of the People's Republic of China into a steep downward spiral.

To stem the economic free-fall Beijing might find it necessary to internalize its economics by an even more massive expansion of its military forces. A vastly expanded military would then be used to subdue troubled North Korea, and absorb its million-man army. This could initiate the 'oriental confederacy' Walvoord wrote about, a/k/a 'The Kings of the East' in Scripture. Next would be a total military subjugation of Tibet, and in-turn cause India to intervene militarily in support of the fiercely independent Tibetans. China and India are nuclear powers, and India has a massive land army of its own. Then there's Southeast Asia (Vietnam, Laos and all the nations on the periphery of the South China Sea) which would not go quietly into captivity. South Korea, Japan and Taiwan would quickly become directly involved causing America's rapid intervention. This is how the so-called World War IV could begin, one that is raging at the very outside of the 70th Week.

These kinds of speculative scenarios are quite probable as they are based upon real-world dynamic that have played out in similar manner as in the first two world wars and the third world war known as the Cold War. Scripture is not specific about the war at the beginning of the 70th Week, but there's no question that it will occur (Revelation 6:1-8). 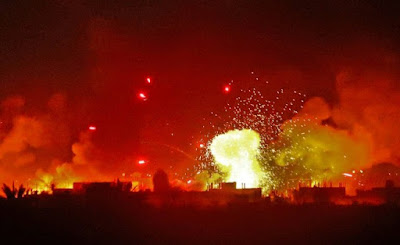 UPDATE 4 May 2020: A simple and to the point update. Israel is now striking Iranian military targets in Syria with regularity and impunity, from the Iraqi border to the Lebanese border.

4 May 2020: The Iranian-Russian issue (discussed below) has another facet: the Iranian Twelver regime holds a much higher level of influence over the al-Assad regime than Russia does. In fact, Syria has become openly defiant against Russia's demands for returns on its investment in saving the regime from being overthrown. Chalk up the Syria-Iran alliance and defiance of Russia to the Shi'a-Alawi brotherhood. Alawi's adhere to the teachings of the 12th imam, Ali, making them a sect of Shi'a Islam.

There are also increasing reports of American and Russian military tensions in northern Syria, mainly in the Tall Tamr and Qamishli region. In the first incident a fist fight erupted between American and Russian troops, with some Russians being on a medevac for hospital treatment. In the second and third confrontations, at Qamishli and Tall Tamr respectively, the two used their armored vehicles to block the other side from continuing its patrol. As this was occurring a heavy aircraft presence above kept close tabs on what the boots on the ground were doing. Syria is rapidly deteriorating under such tensions. The Damascus government has little, if any, effective control over the entire northern and northeastern regions.

3 May 2020: Eschatology Today is now seeing the geopolitical and military dynamic that had existed in Syria for the past five years (since Russian military intervention of 2015) changing significantly. The former fraternal relationship between Russia and Iran, united in an effort to save the Alawite regime of Syria's Bashar al-Assad from the Sunni-led revolt, has in recent weeks begun to unravel to the point of being completely undone.

This is due to the divergence of Russian and Iranian objectives in Syria. Russia wants considerable economic and military rewards from Syria as due recompense for its intervention in saving al-Assad's regime from the Sunni revolt, while the Iranian Twelvers in Tehran remain committed to their eschatologically-driven goal of Shi'a hegemony over Iraq, Syria and Lebanon as essential to the destruction of State of Israel.

Obviously these two objectives are mutually exclusive; they cannot possibly exist simultaneously within Syria. The Iranian war plan is an existential threat to Russia's interest in a reconstructed and economically healthy Syria simply because the resultant devastation of Syria in an apocalyptic Shi'a-Alawite war against Israel would rapidly nullify the Syria that Russia believes it has bought and paid for.

As we know from the prophetic texts of Isaiah and Jeremiah there is a certain fate awaiting Syria that is wholly contrary to Russia achieving its objectives. Recall in September 2018 how Syrian air defenses mistakenly shot down a Russian reconnaissance aircraft, killing the 15-man air crew and sparking a crisis in Israeli-Russian relations. This crisis occurred because Russia wrongly blamed Israel's military instead of Syria's military for the tragedy.

Eschatology Today is once again leaning forward in considering the possibility of a Russian leader wrongly blaming Israel again in the near future for the coming devastation of Damascus and of all Syria, a devastation brought about by the Shia Twelver's and their apocalyptic, Mahdi-hastening eschatology. Such devastation of Syria would necessarily result in massive if not crippling economic and military loses for Russia. Could this be the real-world origin for the evil thoughts and "hooks" placed into the jaws of Ezekiel 38:4, for the desire to invade and to take plunder and despoil an Israel at peace, living securely with no one presenting a threat?


27 April 2020: Israel Air Force (IAF) strikes during the pre-dawn hours this morning destroyed multiple IRGC-Qods Force and Hezbollah facilities in the south of Damascus. The enemy facilities were just west of the main M5 highway from Sahnaya south to Al-Kiswah. They no longer exist.

This morning's strikes are being tied by Israeli and foreign (Sunni Arab) media to another significant IAF strike on an IRGC-QF base one week ago in the area of Palmyra, as well as an IAF strike midweek which annihilated a Hezbollah vehicle convoy on the Beirut-Damascus highway that was engaged in the transfer of Iranian precision weapons from Iran's Syrian warehouses into Hezbollah warehouses in Lebanon. The convoy failed to make it into Lebanese territory.

The reason for the linkage is due to comments made by Defense Minister Naftali Bennet late Sunday. DM Bennett had essentially announced to the citizens of Israel to be alert to what they would see and hear going forward; that Israel had transitioned its military doctrine from not allowing Iran to entrench itself in Syria to one of forcing Iranian forces out of Syria.

“We aren’t just continuing our work preventing Iran from entrenching itself in Syria, we’ve moved decisively from preventative action to forcing (Iran) out.”

These pre-dawn Israeli strikes on Iranian military targets in Syria have for years been assessed by Eschatology Today as the type of military action that would precipitate the destruction of Damascus, as well as the nation of Syria, according to Isaiah 17.  Isaiah 17:14 speaks to a retaliatory WMD strike against Israel's civilian population and the resultant lightning quick and desolating war. It will begin at the 'eth 'erev (evening) of one day and conclude prior to the boqer (morning) of the next day.

We, in the USA, will wake up to this news much as we did this morning's news. Any one of these announced strikes to remove Iran from Syria could result in the literal fulfillment of Isaiah 17.