The Resumption of the Hezbollah-Israel War and Psalm 83 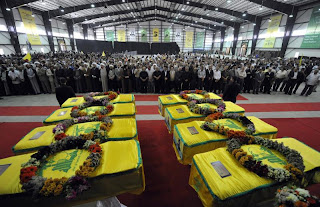 28 August 2009: The image above was taken at a funeral held for Hezbollah fighters killed in action during the summer 2006 Hezbollah-Israel war. I harbor little if any doubt that there will be a lot more of these images taken in the very near future.
In the same vein as we have been discussing in the August 14 Eschatology Today entry, and in detail within Parts I and II of my four-part "The Prophetic Road to Revelation" series, concerning the inevitability of a resumption of that war without further warning, the only relative question about this coming war will be whether or not it morphs into the final Arab-Israeli 'war of extermination' which the prophetic psalmist Asaph vividly describes in Psalm 83. Also as discussed in other entries here, there is no better work on the subject of Psalm 83 than that found in author Bill Salus' peerless Bible prophecy book, Isralestine: The Ancient Blueprints of the Future Middle East.
Bill has a new must-read article up on his Prophecy Depot blog entitled "Could the coming Israel-Hezbollah conflict catalyze Psalm 83?" Here is an excerpted lead-in to the article:

Many eschatologists, those who study end time events, are warning that three world changing Israeli war prophecies are about to occur. Isaiah 17:1, Psalm 83, and Ezekiel 38-39, usually listed in that order, describe prophetic events that could dramatically shift the balance of Mideast wealth and power into Israel’s favor.
Current unprecedented security threats facing Israel’s national existence not only support the eschatologist's beliefs, but have also forced many world leaders to push peace in the Middle East to the top of their agenda. They want Iran to refrain from developing a nuclear weapon, Israel to freeze settlement expansion in Jerusalem, Gaza, and the West Bank, and the Arab League to normalize relations with Israel and finally recognize its right to exist.
The international community continues to prescribe “Land for Peace” as the way to resolve the age old Arab-Israeli conflict; however the Bible predicts peace will come through military means rather than politically brokered real estate efforts.
Presuming the eschatologists are right, how soon might the world see the final fulfillment of these Middle East centered bible prophecies? Could it be that the present military preparations being made for another war between Israel and the Hezbollah could escalate and subsequently become the catalyst for the fulfillment of Isaiah 17:1 and ultimately Psalm 83?

Please go pay Bill's blog a visit and read his article in full.
Posted by Sean Osborne at 5:56 AM

Just as a bit more intresting information to add to this blog entry, I found this tidbit on the Jerusalem Post this morning, www.jpost.com.

"The hidden Hizbullah arms cache in southern Lebanon that exploded in July contained chemical weapons, and three Hizbullah terrorists died as a result of the toxins, in addition to eight other terrorists killed by the blast, the Kuwaiti newspaper Alseyassah Kuwait said on Thursday.

The report could not be independently confirmed by The Jerusalem Post."

Paging Hans Blix, Iraq on Line one to discuss their missing WMD!!!

No seriously, I think this just put all of Lebenon and Syria on the legitimate target list for Israel!