Global SITREP E3-14: The Alliance of the North and the East 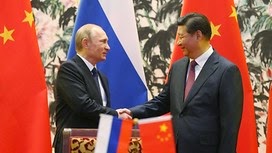 11 November 2014 (Veterans Day in the U.S.A.): The image above powerfully reminds me of something the angel Gabriel prophesied to Daniel which would occur during the 70th Week.

That this passage of prophetic Scripture is with respect to and occurs during the 70th Week is beyond any doubt because it involves the Western Antichrist and four distinct military enemies of his: one to the North, one to the South and one to the East. Not coincidentally, this passage of prophetic verses proves beyond any doubt that the Antichrist is a Western power. Additionally, this passage is also a thumbnail of the world war which will  be occurring during the latter part of the Thlipsis (Tribulation) and all of the Megas Thlipsis (Great Tribulation) of the 70th Week. Moreover this is the war whose end is suddenly caused by the Second Coming of the Lord Jesus Christ at the Battle of Har Megiddo.

In Daniel 11:40-45 we find six sentences which describe an ongoing military confrontation between the Western Antichrist and two of the military camps which attack him simultaneously "at the time of the end."

In verse 40 the southern military forces launch a strike and the northern forces follow through on the attack by coming against him with modern-era, land, sea and air 'shock and awe' maneuver warfare. The military forces of the Western Antichrist parry and defeat this joint attack and then go on the offensive by invading, passing through and conquering the territories of these enemies.

In verses 41through 43 we see this counter-offensive of the Western forces entering coastal Israel but avoiding those territories of the greater post-Psalm 83 Israel that will include ancient Edom, Moab and Ammon. These western forces conquer completely the lands from Libya, Egypt and and south along the Red Sea to Sudan, the land of ancient Kuwsh.

Finally in verse 44 we come to the direct association I see in the image above. The blitz-like military conquest of the whole of the Middle East by the Western Forces of the Antichrist causes the remaining forces of the North to be joined in a new offensive by the Eastern forces (i.e. the kings of the East): "But news from the east and the north shall trouble him; therefore he shall go out with great fury to destroy and annihilate many." This advance of the immense numbers of Eastern forces is what John the Revelator describes in Revelation 16:12-16 as the sixth bowl judgment of the sixth angel, a/k/a Armageddon.

Here's where I think this prophetic future has solid rubber meeting the road in the present time. An article published in yesterday's Financial Times, titled "Putin builds China links as ties with West fray," informs that the Russian Federation's newly updated military doctrine to be published in December 2014 clearly identifies the United States and NATO as the enemy, and the role of the CSTO as the military alliance referenced in the prophetic texts discussed above.

To the readers of Eschatology Today, this is not really new news, but a reaffirmation of the prophetic interpretation I have published here over the past five years, here, here and here for instance. Just one more of the proverbial cans that have been kicked by mankind down a dark road one kick too far, and proof positive that our God is in full control having told us about the end from the beginning.
Posted by Sean Osborne at 8:50 AM

I would be cautious of your "obvious?" proof otherwise... and what does the "late hour" have to do with it? The book of Daniel was written 2500+ years ago... You should know better.

I'll stand with Sean here and step away from newspaper exegesis and hold firm to my BIBLE.

Hmm let's see....the "people of the prince who will come" the 10th and 15th roman legion, all of European (western) descent, the fact that the eastern nations are destroyed prior to the 70th week visa via psalm 83 and ezekiel 38&39, I think it's totally obvious, the eastern Islamic antichrist is clearly debunked

Thanks KenB! Gabriel detailed the forerunner A/C as the Greek/Macedonian Antiochus IV Epiphanes for good reason. Why this Scripture is ignored by folks like Mr. Anon is beyond comprehension.

Hartdawg,
Plus the 5th Legio Macedonica and the12th Legio Apollinaris were there.

But the islamic a/c leaders say there were arabs in auxilliaries so that's why the a/c must be islamic... as if the Arabs and Arameans and Assyrians weren't Christians also.

The islamic a/c THEORY is built upon very poor scholarship and a whole bunch of other ignorant nonsense.

Hi Sean what is your take on Daniel 8? Does that also relate to quote the time of the end?"

It may surprise you, and it also may not, but there are very few chapters in the Book of Daniel that do not speak to events in the future (the time of the end) or, specifically, to some aspect of the 70th Week. The Book of Daniel is a book of prophecy powered by the angel Gabriel and therefore by Father, Son (as the Word) and the Holy Spirit.

Daniel 8 speaks specifically to the origin of the Antichrist. You can read about it in a post from February 2011:

The Origin of the Antichrist

There are other posts relating to specific Daniel 8 references that you can locate by entering 'Daniel 8' in the search tab at the upper right-hand corner of the Eschatology Today mainpage.

Sean,
I agree with your decision not to post "anonymous" posts that do not add to what is believed on this blog. Anyone who has read all the available information that you provide and then insult your position instead of humbly considering what is said is not interested in building up the body of Christ.
Peace be with you. Praying for you.

The guidelines for making comments are clearly stated. I was lax with observing these guidelines; they will now be observed fully. "Anonymous' comments will be flagged for extra moderating scrutiny.

Islam, both Sunni and Shi'a, have an eschatology. It is, as Islam itself, a fully developed demonic deception.

Neither Satan not his demons have the ability to know the future; to give prophecy. Neither did Muhammed have this ability, for what was dictated to him by the demon was utterly false. Anything else was man-made and utterly worthless.

Sean and All here:

I do continue to read your posts and all comments on this blog. It is very clear we are watching end times prophecy. Please watch, wait and pray as the bible states very clearly. The Bride of Christ will be caught up soon. This is my belief.

Before I answer any further questions from you something very important has to happen:

You must identify yourself in an absolutely positive manner. Your posting of comments here as an unknown "Anonymous" is no longer sufficient.


Your statement that I interpret Daniel 8 through Antiochus IV Epiphanes, the widely acknowledged forerunner of the coming Antichrist, without any reference to geography is absolutely, ridiculously false.

Obviously you have not bothered to read the link I posted directly above. Within that link you will find more geographic references that anyone can shake a stick at.

Secondly, the bloodlines of the Psalm 83 enemies is patently evident in what the Lord has stated through His prophets about these enemies having "olam ebah" (an ancient hatred) of Israel. These enemies of Israel are going to be utterly destroyed in the coming war because of their "ancient hatred" of Israel.

There is nothing for you to figure out if you do as has been suggested and actually read Bible prophecy and take the plain text meaning as it is given first, and apply other information (the Bible interprets the Bible) where applicable.