Update 13 March 2019:  At 23:00 EDT last night the IDF issued an alert regarding declassified intelligence on an enemy that would be made public in one hour.  As promised exactly at midnight my phone rang with  the declassified intel which was presented in video form by the IDF spox (LTC Jonathan).

I'm sure that alert and video are the lead story in Israel this morning regarding Hezbollah's (Iran's) drive to establish fighting positions on the Golan from which to attack Israel. We also now have open confirmation from Israel about the recent IAF strikes on Quneitra, Hader (Khader) and Erneh on the Syrian Golan. No doubt there will be a lot more strikes coming in the days ahead, and that quickly takes us to the next SITREP.

11 March 2019: Syria has now twice declared its intention to attack Israel and recover the Golan. The first declaration was to the U.N. three days ago and the second to the world at-large. Behind Bashar al-Assad's government pushing for this is the apocalyptic regime of the Islamic Republic of Iran. This is but one side of the proverbial coin.

The other side of that coin is the now persistent RUMINT (Rumor Intelligence) that the United States will recognize the Golan  as sovereign Israeli territory and do so prior to upcoming election in Israel on 9 April. It will be interesting to see if we get to the Israeli election without a major conflict erupting beforehand.

6 March 2019: As if on cue, what began as a continuous HAMAS nighttime assault against the security fence around Gaza and an ever increasing level of balloon-borne IEDs into southern Israel has transformed over the past 48 hours into a large scale engagement. The timing of this to take the focus off of the Golan has not been lost on anyone, so it is included here as part of the Psalm 83 war.

As of this evening a barrage of katyusha rockets was cut loose by HAMAS. Iron Dome intercepted them. Israel has responded with punishing airstrikes throughout Gaza from drones and fighter aircraft. Tremendous explosions make these strikes far different than the pin-pricks that have been so routine in the past several months. The new port area at Khan Younis is recieving at lot of IAF attention. IDF armor, Merkava tanks to be precise, are staring into Gaza from several locations (avenues of ingress should that order be given).


Meanwhile, elsewhere in Israel... The above image is of PM/DM Bibi Netanyahu posing this morning for a selfie with US Army troops deployed in Israel. The US soldiers are part of the deployment of the THAAD (Theater High Altitude Air Defense) and AN/TPY-2 system.

This system is specifically going to counter any and all Iranian ballistic missiles fired towards Israel. None will make it as the TPY-2 can "see" an object the size of a baseball hundreds of miles away. In fact, this radar can see many baseball size objects at the same time. An Iranian ballistic missile warhead would obviously be much larger than a baseball, so you get the point, TPY-2 sees anything and everything. TPY-2 then tracks, targets and fires the THAAD interceptor(s) which intercepts the target(s) by impacting at a speed of Mach 8 and a distance of about 93 miles from Israel. THAAD is a "hit to kill" high altitude air defense system. Now you know why Bibi and the US soldiers are smiling. Ayatollah checkmated.

3 March 2019: We begin Part IV of this series with a current Operational Intelligence (OPSINT) map from NZIV.net. This map serves as a companion to an also current ILTV report (video below) on the massing by IRGC-QF General Qassam Soleimani of Hezbollah and Iranian proxy forces on the Israeli Golan border. Solemani's intent is for these forces to invade and capture the Israeli Golan.

As you may recall, Syrian President Bashar al-Assad visited Tehran just last week for a pair of face-to-face meetings with Ayatollah Khamenei. General Soleimani accompanied al-Assad in both the public and private meetings al-Assad had with the Ayatollah. Below is the image of the private meeting attended by the three and the Arabic-Farsi interpreter. It would appear that operational orders have been issued to both Soleimani and al-Assad for the war to shortly commence upon Israel. This is the war Eschatology Today has long identified with the literal fulfillment of Isaiah 17 and Jeremiah 49:23-27. 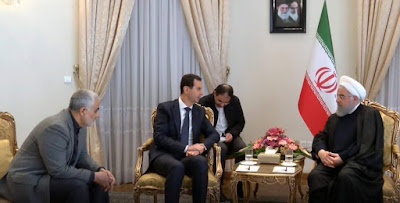 IAF fighters and drone aircraft are active in the skies of Lebanon at this time.

The IDF on the Golan have just engaged enemy targets near Quneitra with tanks and rocket fire.

Wow, thanks, Sean, for your faithfulness. Things appear to be heating up over there.

Wow! You might not get a lot of sleep tonight! Exciting times. May the Lord Jesus protect the IDF and give the Prime Minister and his generals wisdom and strength.

The was limited preemptive action on the Golan near Quneitra last evening; tanks, rocket with abundance of air cover. After-Action intel collection aircraft are "wheels up" this morning.

Terror attack by car ramming against dismounted IDF troops in West Bank put IDF company commander in hospital surgery ward, and injured another soldier. Two terrorists killed and a third wounded by rest of the IDF company. The terrorists houses are being demolished in an expedited manner.

My mother just passed away on the 4th of March and from the way things are shaping up I may not have to wait much longer to see her again. Maranatha.

God bless watso911. I was where you are about 2 years ago.

President Assad took the Iranians help and now he's going to have to do the bidding of Iran. Probably whether he likes it or not. Same with the Russians. It is interesting to see how these pieces will intersect with scripture. We have front row seats.

Bashar al-Assad is of the Alawite Shi'a sect of Islam. They had been seen as secular, but now owe Iran big time. The meeting with Khamenei has huge significance.

Indeed It is interesting to see how these pieces will intersect with scripture. We have front row seats." Might be from the balcony section but that would be fine for me. The higher and lifter up I can get will give me plenty of Shouting space to sing His praises.
Been waiting for this seems like a whole lifetime and now, here it is and the silly politicians haven't a clue as to what is transpiring in the coming together of the forces of real evil soon to be revealed but will they recognize it? I don't think so.
I have said this for at least the last 2 years and will say it until proven otherwise. The warned Great Delusion is by the Hand of God Almighty and the result for those who are perishing because they would not believe and receive the Love of the truth that they might be SAVED. They chose to believe the political lies of the enemy of their souls and had great pleasure in unrighteousness. Check it out 2 These. 2: just start reading and taking it all in. We are indeed, living this all out right now and even though I have a sadness for those who would not believe, I am relieved from the condemnation of never having shared and posted over and over again, the power of Jesus Christ and His Resurrection.
Even so, Marana'tha

I forgot to say, those debts that Syria owes the Iranian regime will never get repaid but that is the very least of their worries. Goodbye Elam, goodbye!

Amen GG5,
I like the sound of that, balcony seats.
Sean has been giving us a play by play on biblical events for years, thankfully keeping us alert and watching.
The rest of the world is without excuse also. The word of God can be accessed in so many ways.
John 3:36 NKJV — “He who believes in the Son has everlasting life; and he who does not believe the Son shall not see life, but the wrath of God abides on him.”
Your right. A strong delusion permeates the world!

I wonder if this declaration was part of the pressure Iran put on Assad at their face to face meeting recently.
I definitely will be camping out here as the intensity builds. You might see a spike of hits on your site. It might be me.. :)

Of that I have zero doubt, as stated in the last paragraph:

"It would appear that operational orders have been issued to both Soleimani and al-Assad for the war to shortly commence upon Israel."

Tell Assad to go ahead and kick that hornets nest.

As all of these prophetic events racket up, my earthly father who is 80 years old, born 1938, is near his death. Since I've been "watching", I've always considered him my generation of strength. He is 80 years old and will be 81 at the end of March, days before the Israeli elections. I've prayed that Dad would not leave until we could all be caught up together. I've tried to imagine him and Mom meeting my brother for the first time, their full term stillborn baby. I was on an emergency flight home on Ash Wednesday and he is still with us. Things can change with his condition in a few minutes. Just last night he said to me how it is so difficult to be so helpless. I believe my earthly father will be meeting our Heavenly Father soon and very soon but I hope and pray that we are all with him. Come Lord Jesus, we are weak but you are strong!!!!

Time is short, no doubt! Soon and very soon.

The long-delayed offensive against Idlib governorate has begun. Russian aircraft are bombing the daylights out of the capital city Idlib.