UPDATE 30 November 2018: As KenB noted in the comments section, the Royal Jordanian Army, with King Abdullah present, engaged in a large military exercise on its border with Israel north of the Dead Sea. The full Report was found on the MEMRI website.

In the now three days since the report was published it has been studied in greater detail. Of note is the fact that the Netanyahu announcement concerning the annexation to Israel of the whole of the Jordan Valley undoubtedly resulted in the Jordanians launching this exercise billed as being defensive in nature, but it was certainly much more than that against the "occupier of Palestine" and the "occupying entity."

To the contrary, this was an unambiguous message to Israel of Jordanian belligerence for the obvious fact that an exercise of this scale is totally unnecessary to cause the destruction of the Allenby Bridge connecting Israel and Jordan. The Jordanians are not folling anyone.

Also, the town of al-Karameh, site of the 1968 battle for which the exercise was named, lies north and 1 mile east of the Israeli border. This town was the northern edge of the simulated battlefield. The southern edge of the battlefield was the historical pilgrimage site where John the Baptist conducted the baptismal of our Lord Jesus Christ. The Allenby Bridge lies between these two points. 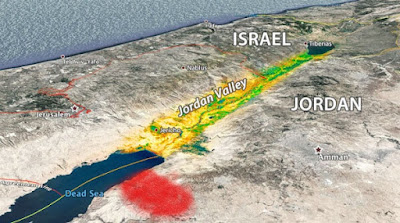 18 November 2019: This is will be a sort of continuation of the 'Missing Pieces' topic of Global SITREP D3-19, with an emphasis on Jordan. Eschatology Today long ago established a direct link between the fulfillment of Psalm 83 and Isaiah 11:14 (NKJV) as quoted below.

"But they shall fly down upon the shoulder of the Philistines toward the west;Together they shall plunder the people of the East;They shall lay their hand on Edom and Moab;And the people of Ammon shall obey them."

We've been keen on watching for Indications and Warnings (I&W) that the current status quo peace accord between Israel and Jordan was in danger. On November 12, 2019 that specific I&W appeared in a MEMRI report that was based on the Jordan Today TV program hosted by Ms. Rana Hmouz.

The program began by celebrating the recent transfer back to Jordanian sovereignty the areas of Baquora and Ghumar. The land transferred, but the Israeli farmers will remain tilling the soil for a while longer. But then Ms. Hmouz got around to expressing the real intent of the program. It doesn't get any clearer than this message to the Jordanian people:


What can be seen here is the convergence of purpose of the entire Psalm 83 confederacy, from Lebanon, to the Arab street in Judea and Samaria, to the terrorist factions in Gaza, and now including Jordan. By looking at Isaiah 11:14 the Jordanian regions of Edom and Moab appear to be the center of what will occur, their being militarily seized by the IDF simultaneously with the conquest of Gaza. The Jordanian region of the capital in Amman will be subdued into what appears at this point to be a type of vassal state to the greater Israel. 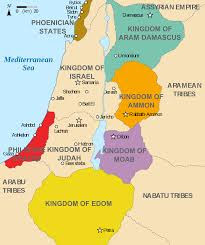 Note in the map above that the northern part of the ancient land of Moab contains the future burial site of Gog and his military confederation's soldiers following their destruction according to Ezekiel 39:11-16. The prophetic new city of 'Hamonah' will be very near to or the same location as the present day city seen on the map as 'Dibon' (Dhiban). This SITREP will be expanded or followed up as new material is located.

Not quite 3 hours ago, 05:30 Israel time, 4 rockets were intercepted by Iron Dome in the northern Golan. The IDF confirms the rockets were fired from Syria.

Explosions have also been reported near Damascus.

This is roughly how I expect word of Isaiah 17 fulfillment to occur at the appointed time - we in the US will awaken one morning to learn of the news.

Meanwhile, don't look now, but Jesus' Olivet prophecy is being fulfilled in real-time all around the world. "Wars and rumors of war, nation against nation, ethicity against ethnicity" are actively in progress right now.

Revolts in at least 2 to 3 dozen countries, from Hong Kong to Bolivia, Spain to Iran... even here in the US the Left is in open revolt against our elected government.

So folks think it's quiet now. It is anything but quiet; our world is in turmoil but we ain't seen nothing yet.

Speaking of Iran, direct from Jeremiah 49:34-39, the revolt against the Twelver Regime just this past weekend claimed 300 dead, 30,000 wounded.

Israel believes Iran is directly responsible for this attack on the Golan. They believe it's retaliation for a very recent IDF covert op against IRGC-QF at al-Abu Kamal, Syria that caused serious harm to Iran's interests.

Lebanon, convulsing with nation-wide civil unrest over government corruption, is collapsing into another failed state and potential civil war, again.

New SITREP is on hold as this situation plays itself out or escalates.

Wow! It is hard to catch one’s breath, these days. Great work, Sean! Thank you, again, as always, for your faithfulness in reporting.

Many blessings to all. :)

That's the point exactly of the next SITREP going up hopefully later today.

I'm not sure if all our brethren have recognized the recent QUICKENING pace of events, so it'll be addressed.

It looks to me like gog's burial plot has just been annexed.

Close. The Valley of Hamongog is about 20 miles southeast of Jericho, near Dibon (starred city on map of Moab above).

Jeremiah 49:23 may have just been fulfilled.

THURSDAY, 21 NOVEMBER 2019: Jordan’s King Abdullah II said that relations between Jordan and Israel, which fought two wars before signing a landmark peace treaty 25 years ago, are now at their worst point ever.

“The Jordanian-Israeli relationship is at an all time low,” Abdullah said.

Being reported by Memri...

The Battle of Karameh occurred while Israel and Jordan were (technically) still in a state of war (War of Attrition) following the June 1967 'Six Day War.'

It was a victory for Israel and ultimately led to a PLO expulsion from Jordan.

Makes zero sense for the JAF to prepare for the last war vice the next war. Wrong theater and wrong tactics.

However, and on second thought, as pure I&W on the Jordan issue per Isaiah 11:14 the MEMRI report is very important, especially in illustrating the 3-battlefront nature of Psalm 83 and Ezekiel 28:24-26.

That is what I was thinking as well as the degradation of civil interaction with Israel when I read that. I didn't expect them to spend time on worth while exercise. Seems like most of the Arab countries just do a lot of posturing...

With today's update this SITREP is complete, Global D10-19 will be next as D9-19 was deleted.

Do the Jordanian phrases "occupier of Palestine" and the "occupying entity" reflect that a peace treaty exists, or are they one step shy of belligerent war talk?

I believe it's war talk.

This clearly illustrates how the situation in the ME can change on a dime. In recent past, I wondered what would cause the sudden switch from ally to enemy between Israel and Jordan. We're about to see the how the rubber (fulfillment) meets the road (prophetic word).

I recall back in the mid-90s how many leaders in the eschatological community referred to the Israel-Jordan peace treaty as the "False Peace." The seculars laughed. 25 years later and they're not laughing any more.