Revelation 13:14 - The Constructed Image of the Beast - Where AI Meets Non-Human Intelligence

UPDATED 25 October 2017: It's been almost five years since the original post below about "the image of the beast" was published. A lot has changed since then, and an update is mandatory, not primarily for most born-again Christians, but for those who will suddenly find themselves in a post-Harpazo world.

AI (Artificial Intelligence) and human intelligence interact on pretty much a routine basis. We human beings now regularly talk to Alexa, Siri or Google Assistant or even the artificial intelligence embedded in your car, your refrigerator, or even your entire house. The AI talks back and responds directly to us about whatever ever it was that you wanted to know from it or to do for you. So, human daily interaction with AI has become common place in 2017 and is growing by leaps and bounds, technologically speaking. In three to five years time there will likely be another quantum leap in the technology driving AI. Futuristic thinkers are even telling us without any reservation that AI/Human Intelligent interactions will become even greater very soon. This isn't SciFi anymore, it's become Sci-Fact.

However, what no one is thinking about, and what virtual none of the most well-known prophecy teachers have touched yet with a ten-foot pole is to discuss what will happen when AI and non-human intelligence are linked together in the very near future of the 70th Week. The Revelation of Jesus Christ tells us this will be the fact-of-the-matter during the 70th Week, and that man-made artificially intelligent construct empowered by a non-human demonic entity (i.e. Satan himself) will have the power of life or death over every individual living on the planet.

[Perhaps if you've not read the original post form December 2012 before, now would be a good time to do so, or to refresh, and then come back up to see where we are today in 2017.]

Think about the prophetic terminology God first used 2,600 years ago to describe what this AI coupled with satanic (non-human) power of the Antichrist and False Prophet will be, and that is "shiqquwts shamem," whose full-meaning would best be expressed as "a thing of detestable, abominable filth that will cause desolation and waste" upon the earth. This thing will be stood up in the Holy Place of the coming Jewish 3rd Temple approximate;y 42 months after the Antichrist confirms a covenant among many.

The technology that will be brought together by men at the direction of the False Prophet (the second beast from the earth) to create this abomination of desolation, the artificial creation of the created to honor and cause worship of Satan in God's Temple, is all around us. Imagine, if you will, Artificial Intelligence that includes holographic capabilities, ultra-life-like cybernetic appearance, virtual reality; a near omniscient situational awareness capable of global control over inanimate things from finance and routine commerce,  to global fleets of drones and superhuman soldiers and robotic war machines, to animate things like human beings and the ability to kill them forthwith. (This super-soldier capability is Vladimir Putin's worst nightmare!)  The ultimate in oppression and totalitarian control of every aspect of life on planet earth. And millions of our future brethren will die professing Jesus Christ, refusing to take the mark of the beast or worship his abominable image of the beast stood up in the the Jerusalem Temple. (Matthew 24:15-22)

No, this is not a plot merger of the Terminator Sci-Fi movie series and George Orwell's 1984, this is what the Bible says will take place in the very near future, and it may well be far worse than described here. The blessed hope for all mankind is the Harpazo, the sudden catching away of the bride of Jesus Christ, to escape all these things, the likes of which have never before occurred on the earth, and never will thereafter for all eternity. The only time anyone has to make a decision for Christ is right now, while there is time to do so before the Harpazo. What will you do?

18 December 2012: One of the things in Revelation 13:14-15 that has always fascinated me is the God-breathed prophecy that the second beast, the False Prophet, will issue a command to all mankind inhabiting the earth that they must construct an image of the first beast, the Antichrist.

The key sequential Greek words in verse fourteen are poieō eikōn thērion, meaning that the fully deceived men of the earth of that time will be called upon by the False Prophet to construct a likeness of the Antichrist. Understand this completely: mankind will be called upon to create an image of Satan incarnate as was man created in the image of God. This will occur shortly after the Antichrist will appear to have sustained a mortal head wound yet he will pseudo-miraculously not die as a result of it. This image of the Antichrist will be constructed by mankind to honor him.
How will mankind construct such a thing? Through the all types of emergent technological know-how that mankind will have at its disposal. It will be a 21st century technology that many are seeing greater and greater glimpses of in these pre-70th Week days: the fusing and absolute convergence of nanotechnology, biotechnology, information technology, artificial intelligence, robotics and instantaneous global communications that provide instantaneous global situational awareness. Mind-boggling to be sure even by 2012-2103 state-of-the-art technological advancements.
This will be the high-tech 21st century equivalent of the statue of Zeus-Olympus that the forerunner antichrist, the Hellenic Seleucid Empire's absolute ruler Antiochus IV Epiphanes stood up in the 2nd Temple on the 25th of Kislev, 168 BC. The difference between this coming outrage and the latter will be that the False Prophet will be able to supernaturally embed a demonic spirit (Greek: pneuma) within this human construct so that it will be a virtual, physical being, a totally aware and communicating entity in the service of Satan which will be capable of killing both Tribulation Saints and all of mankind who will dare to refuse it the requisite worship. Perhaps it will be the demonic spirit known as Abaddon/Apollyon who will inhabit this constructed thing; the penultimate of demonic and gentile desecration of God's Temple?
As Jesus declared in the Olivet Discourse, referring the the prophecy given to Daniel by the angel Gabriel, this action will define the mid-point of the 70th Week. He has made it unambiguously clear that this utterly detestable thing will be literally stood up in the Holy Place within the 70th Week (Tribulation) Temple; that this will be the "Abomination of Desolation." This event, Jesus tells us, will be the final sign for the Jews to flee Jerusalem with extraordinary haste; to flee in the direction of the mountains of Judea meaning 'take nothing with you, just get out of the city of Jerusalem!' 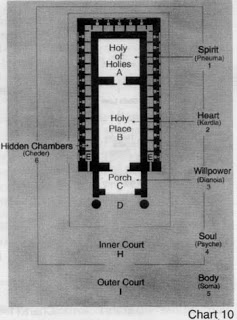 the Holy Place within the 70th Week Temple
I believe there can be little confusion or wonderment as to why the wrath of God is thereafter poured out upon the earth in such a way as there has never been anything of this scope previous or ever will there be anything like it again. And there is no further mention of the image after this. We can only assume that God utterly annihilates the "Abomination of Desolation" and it passes into oblivion without further notice.

Email ThisBlogThis!Share to TwitterShare to FacebookShare to Pinterest
Labels: Abomination of Desolation, Great Tribulation, image of the Antichrist, Revelation 13:14-15, the False Prophet.