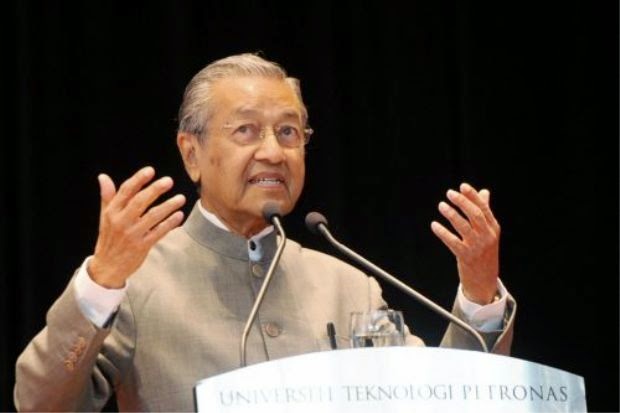 UPDATE 20 May 2013: This verbatim update was just received this morning.

"KUALA LUMPUR – Dr Mahathir Mohamad, former prime minister and one of the most influential figures in Malaysia’s ruling party, has said information about flight MH370 is being hidden and the Australian-led search for the plane off Western Australia is a waste of time and money.

The plane’s disappearance on March 8 was most likely not an ordinary crash after fuel was exhausted, he said. “The plane is somewhere, maybe without MAS [Malaysia Airlines] markings,” he said. “It is a waste of time and money to look for debris or oil slick or to listen for pings from the black box,” he said.

Dr Mahathir, 88, who was prime minister for 22 years from 1981, wrote in his personal blog that he could not imagine that the pilots made a soft landing in rough seas and then quietly went down with the aircraft. “Someone is hiding something. It is not fair that MAS and Malaysia should take the blame,” he wrote.

He believed that the Central Intelligence Agency of the US had knowledge of the disappearance of the plane with 239 people on board but was not sharing it with Malaysia. Boeing, the plane’s maker, and certain government agencies, have the ability to remotely take over control of commercial airliners such as the missing Boeing 777, he said.

“For some reason, the media will not print anything that involves Boeing or the CIA,” he said. In another blog last month, Dr Mahathir, who remains a power broker in the ruling United Malays National Organization, questioned whether the plane crashed into the southern Indian Ocean and blamed Boeing for its disappearance.

His comments on MH370 reflect deep suspicion in Malaysia of foreign involvement in the plane’s disappearance despite Prime Minister Najib Razak saying last week that nobody knew what happened on board, or precisely where the plane was, more than two months after it disappeared.

Najib said experts had identified that MH370 ended in the southern Indian Ocean, where the search was focused, discounting dozens of other theories and reported sightings. But Dr Mahathir also wrote that the planes don’t just disappear in presence of all powerful communications systems."

This military intelligence posting came my way in an email late yesterday (19MAY14), and it is reported here exactly as I received it. The right questions are being asked by Malaysia's former Prime Minister, and he also raises an issue that none have dared to raise before.

"Former Prime Minister Tun Dr Mahathir Mohamad on Sunday suggested that Boeing and the Central Intelligence Agency should be questioned over the missing Flight MH370.

"Someone is hiding something. It is not fair that Malaysian Airlines (MAS) and Malaysia should take the blame," he said in his blog Chedet.cc.

In his 11-paragraph long post, Mahathir expressed his viewpoints and theories on the situation and stressed that something was out of place and that the media would not post anything about Boeing or CIA.

"They can land safely or they may crash, but airplanes do not just disappear. Certainly not these days with all the powerful communication systems which operate almost indefinitely and possess huge storage capacities,” Mahathir said.

Stating that he believes the tracking system on the plane was intentionally disabled, Mahathir questioned on where was the data of the plane, which was supposed to have been recorded by the satellite.

"MH370 is a Boeing 777 aircraft. It was built and equipped by Boeing, hence all the communications and GPS equipment must have been installed by Boeing.

"If they failed or have been disabled, Boeing must know how it can be done and surely Boeing would ensure that they cannot be easily disabled as they are vital to the safety and operation of the plane," he said.

He added that in 2006, Boeing received a US patent for a system that, once activated, removes all control from pilots to automatically return a commercial airliner to a pre-determined landing location.

He cited Flightglobal.com article by John Croft dated Dec 1, 2006, stating that the ‘uninterruptible’ autopilot would be activated – either by pilots, on board sensors or even by radio or satellite links by government agencies like the Central Intelligence Agency, if terrorists attempt to gain control of the flight deck.

"Clearly Boeing and certain agencies have the capacity to take over 'uninterruptible control' of commercial airliners of which MH370 is one," he said.

Mahathir said attempts to detect the plane by looking for debris and oil slick was a waste of money, adding that this was not an ordinary crash and that the plane was  somewhere, maybe without MAS’ markings.

"Boeing should explain about this so-called anti-terrorism auto-land system.

"I cannot imagine the pilots made a soft-landing in rough seas and then quietly drown with the aircraft," he added."

It is my belief that a 777 will be used in a suicide bombing not far in the future. Another possibility is that a 777 will be shot down by Israel or another nation because it fails to properly identify on approach. I firmly believe that this aircraft is intact and probably airworthy at this moment. God be merciful to those souls aboard!

For me the bottom line is that the truth of what has occurred with MH370 was not, has not and most probably will not be told.

Like DuncanMc, I also believe MH370, a Boeing 777 2H6ER passenger aircraft, has not flown its last flight; it was commandeered for a purpose which remains unknown.

Sean, since you're on top of these developments, it's not surprising to you and us readers. Would the CIA then, have intel on this and know where it is and where it may fly to next?

I believe they know what happened to this aircraft, and where it is now, just as Gen. McInerney has continually stressed on live television from the beginning of this saga.

But they're not clairvoyant in any way to know the future; that's something only the Spirit of God is capable of conveying to mortal men through His prophets.

I'm wondering if other journalists and reporters asked similar questions but was silenced by the mainstream media. I'm surprised that the media didn't try to silence this guy

LOL! Have you seen any of the former Malaysian PM's comments or questions in American main stream media?

If so, let me know because that would certainly be news to me.

I know of only two foreign media who reported on this: The Independent (UK) and the Sydney Morning Herald (Australia).