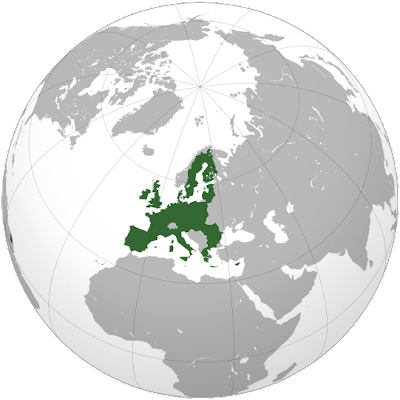 19 March 2011: And so it begins. With the approval and acquiescence of the world governing body, the United Nations Security Council (UNSC) adopted Resolution 1973 as its casus belli for the enforcement of UNSC Resolution 1970.
Within 48 hours of the adoption of this resolution the emergent superpower of Bible prophecy, the European Union, took the lead in declaring a de facto state of war exists against an Islamic sovereign state in the throes of a civil war. Today, for the first time, the armed forces of the European Union went to war against the government of Libya.
And where is America, formerly the military superpower and leader of the so-called free world? In a supporting role! And the apparent leader of the European Union's first military adventure outside of Europe's borders - the French-Hungarian/Greek-Jewish President of France, Nicholas Paul Stephane Sarkozy de Nagy-Bosca.
I believe we are all witnesses to a benchmark event of profound eschatological implications and from which there will be no turning back. September 11, 2001 was a day that changed America forever. March 19, 2011, eight years to the day from the start of the American-led conquest of Saddam Hussein's Ba'athist Iraq, is a day that will prove to be one which changes our world forever.
Update: The NATO base in Naples, Italy, AFSOUTH or Armed Forces South, is the headquarters of this European-led military operation in Libya, and the primary British aviation contribution will be controlled from the Joint Forces Air Component (JFAC) located at Akrotiri, Cyprus. The United Arab Emirates and Qatar have pledged approximately 30 combat aircraft to be placed under European command. The name given to the war against the Libyan regime is "Operation Odyssey Dawn."
All war is based upon deception, and this war will be no exception. The truth behind this war is going to be defended by a bodyguard of lies. So I guess it goes without saying that the lies are being told in advance. One such lie is, "no ground troops." There will have to be boots on the ground in Libya; it is unavoidable in order to ensure the ill-defined mission objectives that do exist are met.
Posted by Sean Osborne at 7:55 PM

I agree with you! What I am watching for now is the EU to form Daniel's 10 Kings. Perhaps a core group of 10 leaders from the Euro zone and foriegn policy and security and defense, 5 from each area. Or, 10 leaders representing the EU and the EU-Mediterranean Union, 5 from the Northern part and 5 from the Southeren part. We don't know yet how they will come about. It will be eye-popping if we do, but even if the Rapture happened today and we did not see them rising, we already have witnessed incredible advancement leading up to the Tribulation Period. Maranatha, Our Lord Come!! Keep Watching Until !!!

Yes Mr. Osborne...So it begins...
These are certainly exciting times in which we are living aren't they.
So many Bible Prohecies being played out_ right before our eyes. Goodness sakes, the newspapers can't even keep up and of course when they do, they get it wrong (as always and a lot of times on purpose)..and of course 'the 'god' of this world has blinded the minds of them that do not believe' being another reason)
Someone not too long ago mentioned to me that the E.U. was going to colapse so that meant they would have no place in the end times..My return comment was, just because it may LOOK like things are falling apart doesn't mean they are....God has a plan here and it is HIS plan and if HE said (which HE did) that the last 'gentile' super power would be the Old Revived Roman Empire then that is EXACTLY what would happen.....
So, as Gomer Pile used to say Surpirse, Surprise, Surprise.....
God Bless you Ministry Mr. Osborne
Gramma from Canada

I am wondering about what are the proponents of the Muslim Antichrist theory thinking of at this moment.

I guess they will have to spiritualize this event in order to keep believing that nonsense.

One thing I have taken note in my eschatological research is that the Lord's prophecies will fulfill in specific events at specific times - or - over a specific period of time which then leads up to a final fulfillment. Years and even decades pass in this process as they always have with Bible prophecy.

Prophecies concerning the 'last days' especially. Like smelling, hearing, then seeing and tasting the popping of popcorn in a theater's pressure cooker, we, the Bride of Christ, have had a ticket to admission to a day-in and day-out matinee of prophetic fulfillment of the Lord's Word for the past 63 years and counting.

'Last days' prophetic fulfillment has been a work in progress for all of these years, and a key date in the start of the process was the re-birth of Israel in a portion of the Promised Land.

For example, the fulfillment of Psalm 83 began the process of in the period of Nov 1947-May 1948 abd will come to final fulfill in the near future intimately tied to the fulfillment of Isaiah 17. When this fulfillment is completed the State of israel will very much resemble territorially that of the Kingdom of David and Solomon, and when ALL enemies around her are vanquished per the prophetic template of 1 Kings 5, Israel will begin to rebuilt the Temple - the one that will exist for the fulfillment of the Abomination of desolation in Daniel's 70th Week.

In this same process of fulfillment I believe we find the mixed clay and iron of the emergent beast kingdom, a process begun in earnest or in its final phase of fulfillment since the rebirth of Israel. A series of treaties - covenants among many - have led the formation of what we know as the European Union.

These are the descendents of the people of the prince to come that destroyed the city and the sanctuary in the precursor or template period of the coming tribulation of Daniel's 70th Week, the period of time between 67 and 73 AD. The destruction of Jerusalem and the Temple occured in the mid-point of that precursor week of years.

So, I see the ten toes of Nebuchadnezzar's image as Divinely interpreted by Daniel as a work in progress, begun in earnest in 1957-58, ten years after the re-birth of Israel in a portion of the land. The final fulfillment and the plucking out of three is a future event.

God Bless you and yours also.

"Someone not too long ago mentioned to me that the E.U. was going to collapse so that meant they would have no place in the end times..My return comment was, just because it may LOOK like things are falling apart doesn't mean they are....God has a plan here and it is HIS plan and if HE said (which HE did) that the last 'gentile' super power would be the Old Revived Roman Empire then that is EXACTLY what would happen....."

Well God Bless your heart Gramma, truly the Holy Spirit speaks from within you! For all of the people of the world who are dissuaded by, or engage in, what we refer to as "newspaper exegesis" need to listen to and heed such words of truth and wisdom as you write here. So I have taken the liberty to repeat them for emphasis!

As prophecy is laid out in His Word its literal fulfilment should be a surprise to no one.

Those who are surprised have had a serpent whispering in their ear.

Listen to God and no other, for there is none other but Him!

Indeed, I have been thinking about the same thing of late.

Such folks have been thoroughly decieved by a 1400-year old Satanic deception and are truly in for a very rude awakening. Deservedly so.

They will have to disavow and admit to non-Spirit led eisegetical interpretation in the face of events that will be soon upon this world: Isaiah 17, Psalm 83, Joshua 13:1-7, Jeremiah 49:34-39 and Ezekiel 38-39 to just name a few.

What kind of crown will the King of kings and Lord of lords present to them? Let us pray for them.

This green map of the revived Roman Empire startled me.

I 'see' a dragon-like monster with a long neck curved up and over on itself, with its head turned to look behind it. It has two bowed legs standing on; or coming out of, the Med Sea and a long body morphing into a squat tail. The UK resembles a figure sat down on its back and Ireland like something held aloft by the figure – a ‘cup’ perhaps. I ‘saw’ it immediately, but if you squint at it, it is clear!!!

I fear I do have an ‘artistic’ trait. Can anyone else see the ‘woman riding the beast’?

I'll just take the Lord's Word at face value (i.e. an immerasureable value) that the harlot rides the beast. ;)

Another thought I've been considering since posting this article:

Soon enough it will dawn on various Watchmen of the Lord that the Western military's destruction of the Libyan military will pave the way for new, from the ground up more modern weapons systems the heir apparent Islamist government in Libya will then purchase, and which the Lord Himself will later destroy in the fulfullment of Ezekiel 38/39, and which the Israeli's will burn as fuel for 7 years.

one thing I'm curious about is what form the e.u. (revived Roman empire )take after the rapture, or even before it. will it take over the entire middle east like in jesus' day? will it still be the e.u? will the current e.u. collapse and form into an even stronger force? it'll be interesting to watch God's plan unfold.

Great article, Sean. You know I remember telling Constance Cumbey to keep an eye out for Sarkozy long before he became President of France.

It seems prophetic, no doubt, but the U.S. as a support?? Well, maybe, but just this morning CNN mentioned 308 missions flown over Libya and 300 of those were by the U.S. Doesn't seem very 'supportive' at this first glance. Definitely ground-work is being laid for the future, though.