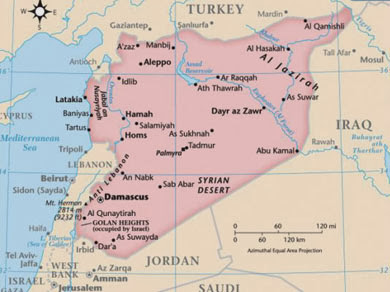 UPDATE 24 October 2013: The full-blown international war described in the original 2 October post below has effectively moved into Lebanon where open sectarian warfare between Sunni and Shi'a neighborhoods in Tripoli, Lebanon have raged out of control all week long. Saudi Arabia is warning of full-blown civil war erupting in Lebanon and has directly threatened the Lebanese homes and loved ones of Hezbollah's troops in Syria with "great cost" to be borne if it does not withdraw its forces from supporting Bashar al-Assad's army. Saudi Arabia is now directly targeting Hezbollah in its war against Iran in both the Syrian and Lebanese fields of battle.

8 October 2013: Two or more brigades of Bashar al-Assad's armored divisions were detected moving south from Damascus to assembly areas anticipated to be along the M5 highway. Another armored force appears poised on Highway 7 opposite al-Quneitra. The first battle was engaged at rebel-held Khan Ar-Nabeh, a town 2 miles from the Golan Heights 1974 cease-fire "Line Alpha" of disengagement and no-man's land, and 4 miles from the main highway interchange before al-Quneitra. Not much will remain of Khan Ar-Nabeh after this battle, the southern edge of which lies on the 1974 cease-fire "Line Bravo."

The objective of the Syrian force appears to be to sever the rebels from their Jordanian supply corridors through Dara'a and from medical treatment of its wounded across the Golan in Israel.  This maneuver will present the Syrian army with a "kill box" from the Jordanian border to the mountainous Lebanese frontier in which rebel forces will be trapped and exterminated. Once the maneuvering is completed, and short of any significant foreign intervention, the Syrian force appears likely to achieve this objective and be in a position to deal far more effectively with the newly created Liwa al-Islam put together by Saudi Arabia.

2 October 2013: The war in Syria has finally morphed into the full-blown international war most had hoped would not take shape in the wake of recent U.S. threats of direct intervention and the Russian Federation's military and diplomatic countermeasures against it.

Now the war has become a battlefield directly pitting Sunni Saudi Arabia against the apocalyptic Shi'a Islamic Republic of Iran. Tehran versus Riyadh. It's the same Sunni versus Shi'a inter-Islamic war, but more defined than ever before. The immediate objective of the new Sandi-controlled rebel formations will be full control of the city of Damascus and all of southern and eastern Syria. The central front is headquartered in the Ghouta/Jobar areas of eastern Damascus where the chemical attack of 21 August occurred. The theological and eschatological ramifications of a great battle between the armed forces of Sunni and Shi'a Islam over the city of Damascus and Aram/Syria will be immense among all parties involved. This will be a defining battle for them.

On one side is Iran and its IRGC controlling Syrian government forces and Lebanese Hezbollah. On the other is Saudi Arabia and its newly created Liwa al-Islam or Brigade of Islam. Riyadh's Army of Islam is a confederation of many thousands of jihadist fighters from 43 to 50 different "brigades" that have been in operation in and around Damascus without any higher headquarters directing their operations or unity of purpose. This force is now under the direct command of Zahran Alloush and his father Abdallah Alloush, a Syrian Salafist based in Saudi Arabia. Salafists are the theological fundamentalist brethren of the Wahhabists of the Saudi Royal family. The ultimate goal here is the Saudi-funded formation of an opposition Syrian National Army.

Left out in the cold in this realignment of rebel forces without any foreign government backing are the Al Qaeda-aligned jihadists of Jabhat al-Nusra and their Iraqi cousins of the Islamic State of Iraq and the Levant (ISIL). These formations will be marginalized or absorbed by the now better equipped, organized and commanded Brigade of Islam.

So begins what may well be a final battle for control of Damascus and southern Syria, a head-on collision between Saudi Arabian and Iranian aligned forces with the prospect for escalation to direct conflict between the two regional rivals facing each other across the shallow waters of the Persian Gulf. How this all manifests itself in the prophecies of Isaiah 17 and Jeremiah 49 remains to be seen, but it does appear that the Sunni's will prove to be the superior force before biting off more than they can chew in taking on Israel in the fulfillment of Psalm 83.
Posted by Sean Osborne at 3:30 PM

Israeli PM Netanyahu's speech at the U.N. on Tuesday shows we are nearing the prophetic times in which you have mentioned.

Your prophecy updates are important. The mainstream news media simply won't focus much on Middle-East news.

Thanks for the update Sean! Have a great day!

It's all OSINT analysis based upon (Open Source INTelligence) what I learned from reading several non-US print media reports - mostly Arab and Israeli.

Netanyahu's speech told me that he's just about arrived at his personal "Popeye Syndrome" moment.

Yes, Popeye Syndrome as in "That's all I can stands, I can't stands no more."

And you know the rest.

Perhaps the biggest surprise to me during Netanyahu's speech was seeing the UN hall half empty.

Were the delegates completely oblivious to the fact they were missing the most important speech of the entire session? Are they clueless as to the historic times we live in? Do they not realize the region is on the brink of war?

Yuppers, the GA hall had a lot of empty seats.

With respect to your trio of questions...

"Were the delegates completely oblivious to the fact they were missing the most important speech of the entire session?"

More than likely, but blind hatred is the global number one cause of stupid is as stupid does.

"Are they clueless as to the historic times we live in?"

Completely. It's another manifestation of that blindness thing-mi. I'd like to refer to this as the Neville Chamberlain Syndrome.

"Do they not realize the region is on the brink of war?"

Some do. In fact the Shi'a are doing just about everything they can to bring it on as soon as possible, and that all depends on when they have their nuke warheads ready to go.

Hopefully, Israel will strike and Iran will be forced to fight with just the army and the weapons they have and that won't work out too well for them.

I'm of the belief that the region has been on the brink of war for 5 years and it's only the staying hand of God that's kept it from exploding. I think really soon, however it's going to explode and we will be here to witness it. I could be mistaken tho

Sean is there still American troops in the cities of the Aroer region of Jordan? (Isaiah 17:2)

Earlier this year we had thousands of troops in Jordan. How many troops do we have there now?

And do the Jihadist now pose a threat to Jordan as well?

Edom, Moab, Ammon & the Hagarenes all are in Jordanian territory. (Psalms 83:6-7)

Do you think the Jordanian Palestinians 78% of Jordan's population do you think they will soon be joining Al-Qaeda since this prophecy seems to be moving fast forward?

Al-Qaeda appears to be gathering strength in all other territories bordering Israel in the Psalms 83 prophecy.

It does appear Israeli PM Benjamin Netanyahu will be eating his spinach soon and will soon clean up his neighborhood eliminating all the neighborhood bullies and thugs.

Yesterday morning in Amman, Jordan there was a meeting between the Jordanian Chairman of the Joint Chiefs of Staff General Mashal Mohammad Zaben, and U.S. Assistant Secretary of Defense for International Security Affairs Derek Chollet and King Faisal Bin Al Hussein.

The topic of discussion was enhanced cooperation and coordination of U.S. and Jordanian armed forces in Jordan.

This indicates to me that the new underground U.S. headquarters in the region of "the cities of Aroer" will continue to function and increase in capability. That would translate into more troops and de facto U.S. defense of Jordan against any enemy coming out of Syria.

Jordan has had a jihadist element within it from the beginning; the late Abu Mus'ab al Zarqawi was a Jordanian and was Al Qaeda #3 until we caught up with him at his safe house during June 2006 near Baqubah, Iraq. Two 500 lb laser-guided bombs released by US F-16s took care of that nasty bit of business.

Edom was located in what today is the Sinai Peninsula, southwestern Jordan and northwestern Saudi Arabia.

I am of the opinion that the reference to Hagarenes in Psalm 83 is a direct reference to Islamic jihadists. Prior to Muhammed and the rise of Islam, Hanif Arabs were fundamentalists in Arabia who adhered to monotheistic believe in the God of Abraham. Mohammed came along and these ancient Hanif Arabs were deceived and adopted his Al-Lah as being the same as their Al-Lah.

The Hanif Arabs came from Hagar's (Arabic: Hajar) son (by Abraham) Ishmael, so they are a descended branch of the "Ishmaelite" family tree and originated in the Hejaz region of Saudi Arabia (near Mecca).

Many modern Arabic words have their root in Hagar/Hajar, words such as: mujahir/mujahid, hajir (the Hajj pilgrimage all muslims must make) and hijra. In today's language a Hagarene (Hajarene) can mean any Muslim or Ishmaelite, and the most fundamentalist of them are the mujahideen, or Islamic jihadists, a/k/a Al Qaeda et al.

Oh, I almost forgot... in his UN address Bibi Netanyahu made is very clear that Israel will strike Iran even if it has act alone.

May be it go alone, maybe it won't. Of one thing I am certain... Israel will go.

I have wondered for a long time about the timing of Israel's strike on Iran. I don't understand what is holding them back since it seems obvious that they will have to strike alone. Bibi has put his credibility on the line multiple times and maybe his hesitance is a ruse to lull them into complacency... I wish there was another way out of this but I see none. Hard times ahead for the world.
DuncanMc

1300 EDT 09 OCT 13: About 4 hours ago a brief but violent skirmish erupted between the IDF and the Syrian Army on the Golan Heights.

Nothing further was heard from the Syrian side.