Global SITREP A8-15: Has War Erupted On Israel's Northern Front? 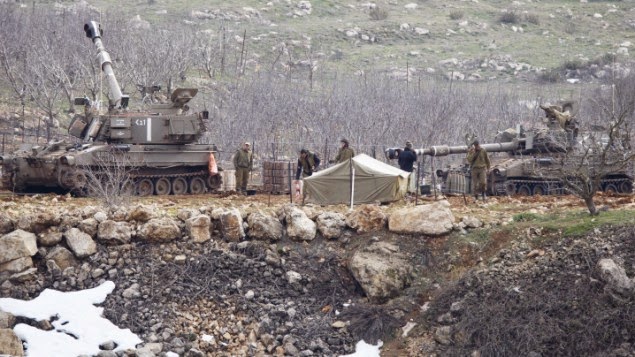 FINAL UPDATE 30/31 January 2015: Here's what may well be the final update to this SITREP and which I hope will provide the final level of clarity to understand what happened this week.

It is my assessment that the government of the State of Israel stood down from engaging in full-scale warfare this week in order to allow the Western gambit of negotiations with Iran to run their course by May 2015. The government of Israel fully anticipates that a nuclear accord between the P5+1 and Iran will be reached by the current deadline, and that it will not be worth the paper it is written on; as meaningless as the Molotov-Ribbentrop Pact of August 1939.

The government of Israel is acting within the parameters and recommendations of a report  published two weeks ago by the Begin-Sadat Center for Strategic Studies which was written by Maj.Gen. (Res.) Yaacov Amidror which states that Israel must be prepared to act alone to stop the Iranian nuclear program during the coming year, as well as engage in conventional ground warfare against the likes of non-state or quasi-state entities such as Hezbollah/IRGC-QF, HAMAS and Islamic State operating from bases in Lebanon, Syria, Jordan, Judea and Samaria and the Sinai. This also represents the most up to date assurance that Israel will launch military strikes to halt the Iranian nuclear program irregardless of any agreement reached between the United States, its European allies and Iran because the agreement will enable Iran to "pursue nuclear military capabilities."

Students of Bible prophecy should readily recognize the above vignette as ongoing Israeli military planning and preparedness for a very near-term and literal combined fulfillment of Jeremiah 49, Isaiah 17 and Psalm 83. Clearly, on the whole this presents itself as the imminent prophetic "flood" of fulfillments I have been writing about of late.

Israel's planning and preparation for the coming conflagration is matched by both Hezbollah's and Iran's insistence that their new warfighting front on the Golan will be maintained and expanded according to pronouncements from Hassan Nasrallah and the IRGC Commander, Major General Mohammad Ali Jafari. The pair of Shi'a terrorists made clear that neither the ongoing war in Syria nor the P5+1 nuclear negotiations would have any effect upon future actions they will take at the time and place of their choosing.

According to the Lebanese media outlet Al-Mayadeen, the twin pronouncements were also made shortly after the reclusive IRGC Qods Force Commander, Maj. Gen. Qasem Soleimani, had arrived in Beirut and met with Hassan Nasrallah. It is important to note here that Soleimani delivered direct orders to Nasrallah from Tehran for Hezbollah to launch the attack which commenced on Tuesday of this past week. This confirms PM Netanyahu's announcement on Thursday that Iran was directly responsible for the deadly ambush in the Golan.

29 January 2015: It didn't take long for many in the Israeli media's analysis business to focus upon the nonsensical nature of what happened on Wednesday: the bellicose but patriotic rhetoric in Tel Aviv and Jerusalem clashed head-on with the reality of what was occurring on the front lines in the Golan. As if Hezbollah's Kornet-E anti-tank missiles blowing up IDF troops in unarmored vehicles was acceptable behavior.

As I view these events in hindsight what I see is Israel's version of Benghazi. I see that Islamic terrorists executed a well-planned, high-tech ambush that slaughtered IDF troops who should not have been where they were; the defenseless manner in which they appeared on a live-fire battlefield, and yet despite the rhetoric of the most senior leadership the equivalent of a stand-down order was issued.

The worst possible of all possible signals has been sent from Israel to those in Tehran and Qom who openly and repeatedly call for Israel to be wiped off the face of the earth. It's pretend time in Israel. They are pretending their most rabid enemies did not just attack, and the brief response from the IDF was just a routine maneuver exercise that happened to involve live munitions.

And here I have long thought that former PM Ehud Olmert was an inept leader during the brief 2006 Lebanon War. This one had fewer casualties, but the result was far, far worse.


28 January 2015: Beginning with Hezbollah rocket fire into Israel yesterday afternoon that continued into evening, it appeared as if war suddenly erupted on the Northern Front between Israel and Hezbollah, Iran and Syria.

Hezbollah began firing rockets from Syrian territory against Mt. Hermon and the northern Golan Heights in Israel. Israel responded with intense counter strikes, both artillery and air, against the positions where the Hezbollah firing originated. Those positions were reported to be Syrian army positions which the IDF and IAF pasted with precision strikes that resulted in secondary detonations. There are enemy casualties.

Whether this was an isolated eruption or the start of full-scale war was in doubt until a short time ago when mortar fire from Syria and Lebanon against IDF positions began and at least one anti-tank rocket was fired against an IDF vehicle resulting in at least six casualties among IDF troops.  This escalation in warfighting continues, and Israel is expected to launch massive retaliation shortly.

1 AM Jerusalem 29 January - 6 PM New York 28 January: It appears that Israel's government has decided that the deadly Hezbollah ambush of an IDF convoy inside Israeli territory today that utilized six Russian-made 9M133 Kornet anti-tank guided missiles (ATGM) and road-side IEDs has been avenged through the retaliatory strikes that occurred earlier today in Lebanon.

A critical consideration that Hezbollah's offensive military capabilities must be rendered insignificant before Israel is forced to tackle the Iranian nuclear weapons program appears to have been the loosing argument during emergency deliberations in Tel Aviv today between PM Netanyahu and Defense Minister Ya'alon.

Accordingly, it appears this evening as though Israel's leadership has opted to wage full-scale war in the near future with a nuclear-armed Iran supported by heavily-armed Hezbollah and IRGC forces arrayed in an arc extending across all of Lebanon and western Syria to the Golan rather than neutralize this close proximity threat at the present time when Israel is fully prepared and Iran does not appear ready, willing or able to apply its nascent nuclear capability in the event of the 3rd Lebanon War that was nearly triggered today.

So, what we're left with is the mind-numbing conclusion that the jihadist Shi'a enemy launched a sophisticated retaliatory ambush and attack against the IDF on Israeli soil that could have caused a third Lebanon war this same jihadist enemy was unprepared to fight? And the government of Israel accepts this premise as a valid argument?

More questions than answers means this is not finished by any means. A major election in Israel is just a few weeks away. Let's see what tomorrow brings.

I agree with you that Hezbollah's capabilities need to be taken out before dealing with Iran. Seems like yet another golden opportunity being wasted.

I find it incredible that more than a week after the Congress invite to Netanyahu the WH outrage to the media still hasn't subsided.

It's just crazy to me they can be so "outraged" that Congress dares to hear from the leader of the Jewish state.

Will they continue this daily fury for the next 5 weeks until his speech?

The faux outrage, which now includes Nan-Francisco Pelosi blathering about how Netanyahu's invite could jeopardize the Iran talks, is based upon one thing and one thing only - Obama's personal political agenda regarding Iran being challenged by the invitation the GOP extended to Netanyahu.

If the GOP invite had been extended to 'Gog of Magog' or his buddy the Ayatollah there wouldn't be so much as a peep of protest.

I am just amazed at the exceptionally high level of cluelessness and inability to identify the enemy..and an evil one at that, that the entire world (US, Israel, everyone) is facing today. The collective media just writes defensive narrative in support of evil. The citizens are suffering from acute apathy, and I think a mighty storm is about to hit. I guess this is the result of a world led by "elected" officials who are enemies of Jesus. Well, we are about to witness God move in mighty ways…HIs will be done…and in a little while the wicked will be no more. Thank you for bringing clarity to this. God bless.

LD I completely concur; well said.Sean, THX again and we watch and wait for Christ to take us home.

I'm sorry for what must happen, but I'm past ready for things to commence. Let's go

Why do you think 5 US officials are suddenly spilling the beans about the Imad Mugniyah killing in 2008?

Are they seeking to embarrass the former administration and Israel?

And shouldn't they also have killed Qasem Soleimani if they had the chance?

This is not new news. Not many paid attention to, or have forgotten over the past 6 years and 11 months, the media reports right after Mughniyeh was assassinated that made clear it was a joint US-Israel operation.

Most of us said at the time that his death was 15 years past due.

Now you and everybody else knows why Qasem Soleimani tends to keep a real low profile.

I'd been holding out hope that at some late date in this process there would be some sort of national unity in Israel about the need to confront Iran.

Clearly though that was nothing more than a pipe dream.

The Israeli left seems to have become as crazy and enraged about Netanyahu's efforts to confront Iran as the American left here.

Well, Mark, the real deal here is that we're really deep into the run-up to the 70th Week, and the 70th Week is primarily about the people of Israel recognizing and receiving Jesus as Messiah, and secondarily about the judgments that will be brought upon a disbelieving world.

It probably doesn't matter much any more which individual human beings are on the political right or on the political left - that paradigm has just about run its course because all people of both political persuasions are without hope and eternally damned without Jesus Christ as their personal Lord and Savior.

It appears to me that the course is set, virtually on autopilot.

Couldn't agree more Sean. Left/right, repub/dem, Jew/gentile, etc, etc. The only designation that matters at this point in history is "believer", but that has always been the case....man has just managed to confuse the issue.

I have to research some of the claims being made, and there is also the issue of whether or not this current generation is a generation of strength per Psalm 90:10.

Nonetheless, we must be living as if the Harpazo will occur in the next split second.

As you seem to have understood beforehand, that site has very significant 'date setting' issues that were apparent within two minutes of my first look at it.

Not only that, but a countdown clock for the Harpazo? Is he kidding?

More importantly, the site owner is flat-out saying the Harpazo will occur on 13 September 2015.

He cannot possibly know that; only God our Father knows that!

No, I cannot recommend this site nor post a link to it.

What I am going to do is post something that the Lord has let me know He wants to be posted right away.