Global SITREP D10-15: Bible Prophecy and the War in Syria

UPDATE 27 October 2015: Russian drone footage of fighting in the Jobar district of eastern Damascus, Syria. This is the literal fulfillment of Bible prophecy in everyone's face. Hat tip to Ken B who found this clip in Australian news.

Update 24 October 2015: OSINT reporting continues to present strong evidence that despite incessant Russian combat air support the Syrian, IRGC and Hezbollah troops pushing hard towards Aleppo have achieved little if any progress. Just the opposite appears to be the fact of the matter. Thus far the RIS (Russian-Iranian-Syrian) anti-jihadist offensive has actually stalled due to US-supplied BGM-71E TOW anti-tank rockets once again making their presence felt on the battlefield. These anti-armor weapons were first noted being present on Syrian battlefields last year. Once again several dozen of the Syrian army's  Russian-made Syrian T-72s with their reactive armor have been chewed up deluxe by these American weapons which, truth be told, are every bit a decisive 'game-changer' on the battlefield.

So successful have the CIA-armed FSA units using TOW rockets been that they have blunted the pro-regime forces offensive towards Aleppo and spun around to go on the offensive near Hama and in eastern Latakia Governorate. It is here that IRGC Brigadier General Reza Khavari and seven other IRGC field commanders were dispatched to wherever Shi'a Twelver Muslims go upon becoming battlefield casualties near Aleppo. Of note, one of these seven IRGC new casualties was Abdollah Baqeri Niyaraki, the former bodyguard of Mahmoud Ahmadinejad. Regular IRGC troop losses follow accordingly.

It may not be just a matter of time before Russian marines and their Cuban-crewed T-90 main battle tanks at the Jableh airbase come face-to-face with these same jihadist forces as they begin to push deeper into the al-Assad ancestral homeland of Latakia. Thus far a handful of Russian troops have been killed by anti-regime artillery rockets near their airbase west of Jableh.

23 October 2015:  "Damascus has grown feeble; she turns to flee, and fear has seized her. Anguish and sorrows have taken her like a woman in labor. Why is the city of praise not deserted, the city of My joy? Therefore, her young men shall fall in her streets, and all the men of war shall be cut-of in that day," says the LORD of hosts. "I will kindle a fire in the wall of Damascus, and it shall consume the palaces of Ben-Hadad." -Jeremiah 49:24-27  "Behold, Damascus will cease from being a city, and it will be a ruinous heap." -Isaiah 17:1

According to news reports issued last evening, the three primary non-Islamic State jihadist groups in Syria (The al-Nusra Front, Ahrar al-Sham and the Islamic Union of Jund al-Sham) have joined forces and created a unified command center known as Jund al-Malahem, or The Army of Epics. They have made their headquarters in the Ghouta suburb of eastern Damascus. This jihadist unified command's objectives are to destroy the Syrian government of Bashar al-Assad and his army as well as the military forces of al-Assad's would-be rescuers from Russia, Iran and Lebanon who arrived in greater numbers three weeks ago. Should Russian or Iranian combat aircraft begin flying combat sorties in the Golan region then Israel will be forced to scramble the IAF and the war would immediately escalate into what most believe at present to be the unthinkable.

The sum of these forces arrayed against each other are more than capable of reducing the already dire condition of Damascus, seen in the image above, into the literal fulfillment of the prophecies of Jeremiah and Isaiah. We are here as witnesses to the literal fulfillment of the prophetic word of God. I suggest a study of 1 Corinthians 14 would be most beneficial (a blessing) to all at this time.

16 October 2015: This SITREP will attempt to cover a very rapidly changing situation in northwestern Syria as Russian, Iranian and Syrian (RIS) combat forces engage Sunni jihadist rebel forces along a broad axis from Hama to Idlib as seen in the map above. This general offensive began this week and appears focused in the direction of Iblib (blue circles image below). 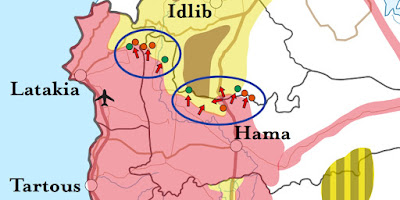 Let me state categorically from the start:

1) I do not believe the war in Syria will morph in the the prophecy of Ezekiel 38/39, and those who are saying so are mistaken in their analysis or exegesis of Bible prophecy. A rather small Russian force is now present in Syria, perhaps 3,000 men in total, and they have brought with them, at sea and ashore, equipment which dates to the end of the Cold War. The Russian armor (tanks and infantry fighting vehicles) are crewed by a small cadre of imported mercenary Cuban soldiers. What next, Venezuelan soldiers?

There are Hezbollah soldiers, probably not more than a total of 4,000 in Syria, and approximately 2,000 IRGC troops have have been inserted direct from Iran. This is not a large force, but it is an unprecedented deployment of Iranian troops outside of their borders. The IRGC forces have been deployed into Syria because Lebanese Hezbollah is not capable of holding any defensive line much less defeating all of the Sunni jihadist forces. The IDF is taking note of this.

The combined RIS force is divided among front lines on northern, central and southern fronts.  Not even one-tenth of one-percent of the Magog military force identified by the Lord in Ezekiel 39:2 have been deployed into Syria. Without belaboring the issue any further, there is nothing in the ongoing Russian/Iranian operation in Syria today which indicates any connection to Ezekiel 38/39.

2). I do believe the war in Syria will result in the near-term fulfillment of Jeremiah 49:23-27 and Isaiah 17 which precede Ezekiel 38/39. If one studies the texts carefully the immediate indication is that the RIS forces stand to suffer a major defeat, but so too do the Sunni jihadists. And as we all know from these prophetic texts, Damascus will cease to exist as a city in stages, as the text relates "like a woman in labor," (Jer. 49:24b) and so too will the state we know as Syria (Is. 17:3b/c). The two opposing forces will apparently annihilate one another by one means or another. Notice the area where the battles are raging at the moment in northwestern Syria is precisely the region identified by Jeremiah 49:23! Brethren, we are witnessing this process of fulfillment in real-time!

Firstly, there is a need to mention a report which has interrupted what I had prepared to post initially. A very large explosion which was felt in villages and towns in all directions at a distance of 5 to 10 miles occurred yesterday behind the lines of the RIS forces, not far from where the aircraft is located on the map. According to initial OSINT reports jihadist rebel forces may have fired a captured but highly inaccurate Scud missile at the Russian air base near Latakia (Jableh region). I'll be looking for details on this.

Secondly, the much heralded RIS landwarfare offensive has apparently not gotten off to a good start despite intense airstrikes and gun/missile artillery barrages and complete tactical air superiority. Very little ground has been taken from the Sunni jihadists thus far. There are also reports that RIS armor has suffered very significant losses in this first week. Recent reports reveal that the Russian armor is crewed by Cuban troops. Then there are reports of prominent Iranian and Hezbollah formations having lost their commanders in combat near Aleppo, with IRGC-Qods Force General Hossein Hamadani being the most senior and most significant.


To tie up a few loose ends in this SITREP, the following points should be made. I think this will be a Russian-Iranian military disaster because it is not being done with anything closely approximating overwhelming military force. Iranian and Russian leaders (namely, Soleimani and Putin) have grossly underestimated the requisites for this type of operation; they're trying to wage asymmetrical warfare on the cheap.  That fact alone will result in operational failure and the withdrawal of whatever forces remain on the battlefield.

There are verses in both Jeremiah's and Isaiah's prophecies that directly relate to an apparent military catastrophe along the Syrian littoral of the Eastern Mediterranean Sea and ashore in the area from Hama to Arpad (the area of Aleppo and north to the Turkish border), and, of course, the destruction (possibly if not probably by nuclear means) of Damascus and all of the military forces that will be within the city as it meets its prophetic fate. Also, not only will the endgame of this intervention in Syria be a military disaster for the Russians and Iranians, but Syria as a nation itself will cease to exist.

The sum of these inter-related prophecies, plus Jeremiah 49:34-39, may well provide an even clearer explanation for the absence of both Syria and Iran in the Psalm 83/Isaiah 11:14/Ezekiel 28:24-26 prophecies which specifically involves Lebanon, Jordan, the West Bank and Gaza/Sinai.

Comments should be on topic. Consideration will be given to off-topic comments of merit.
Anonymous comments are not permitted; God knows who you are, so should your brethren.
Comments may be made to any post on Eschatology Today.