(UPDATE BELOW) 8 May 2018: With multiple sources indicating an imminent Iranian missile attack against Israel being launched from Syria, it was not difficult to project that Israel would launch one or more preemptive strikes. Accordngly, the first of what may become several strikes - depending on the IDF's post-strike Battle Damage Assessments (BDA) - occurred just before 4 PM EDT this afternoon at the large IRGC base at al-Kiswa. The IAF struck this same IRGC base on 2 December 2017.

The targets of todays strike were Iranian missiles and their launchers. The IAFs air-to-ground missiles clearly hit their targets as seen in the Syrian media image at the top. Once again the Israeli Air Force operated with impunity against military targets in Syria, presumably under protection of Russian air defense systems located at Khmeimim Air Base to the northwest. Below is a satellite reconnaissance image of the Al-Kiswa IRGC base taken in May of last year. 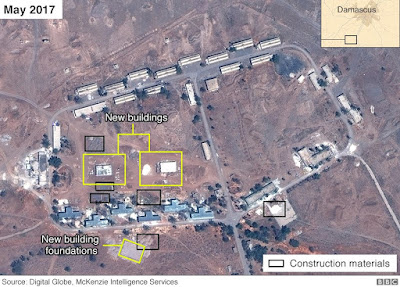 As expected the sound of crickets can be heard coming from official Israeli government and IDF spokespersons office. In Damascus the sound of massive explosions were heard; the reddish glow of fires in the night sky coming from the direction of the Al-Kiswa base located just 7.4 miles to the south were seen. Should Iranian missiles from any part of Syria or Lebanon be lauched in retaliation, Israel has previously promised a severe response will result, probably larger than the destruction of the Syrian air defense system a couple months ago.

UPDATE 10 May 2018: The Eschatology Today analysis of the full-scale war that erupted early this morning on the Golan border between Israel and Syria, when Iranian forces launched a rocket attack on IDF positions is as follows.

This is ongoing proof that all can see that the Ezekiel 38/39 war was NOT next, and was NEVER going to be next, in the series of prophetic fulfillments that will lead to the start of Gabriel's 70th Week prophecy concerning Israel's future. The issue has been settled conclusively.

What is occurring today reinforces the fact that God makes no mistakes; men do, and lots of them. Consider: the Prime Minister of Israel, Bibi Netanyahu, was in the capital city of prophetic Magog and standing next to President of the Russian Federation, Vladimir Putin (Gog of Magog), during a celebratory parade just a handful of hours before this war was commenced in earnest by Persia, one of Magog's allies. PM Netanyahu almost certainly conveyed to Mr. Gog a promise of what would come down on his allies should they strike against Israel. Less than 24-hours later, that has become a promise kept.

The IAF is engaged this morning is massive air strikes on bases around Damascus which house and receive the weapons Iran is using. The damaged that has been done particularly to Iranian assets has been categorized as extremely severe. One might anticipate a no-fly zone being declared and enforced by the Israel, with the possibility of Iranian and Syrian cargo aircraft carrying war materiel contraband cargo being shot down by patrolling IAF aircraft. Further current battle damage assessments will be forthcoming.

Make no mistake, this war which is currently limited to within Syrian borders is certain to escalate; they key provisions within Isaiah 17 and Jeremiah 49:23-27 stand to be both the end game for those prophecies as well as the starting point for several others: Joshua 13:1-7, Psalm 83, Isaiah 11:12-14, Ezekiel 28:24-26. Therefore, we can reasonably expect Gaza and Arab unrest in Judea and Samaria to go well beyond any previous intifada.

UPDATE 11 MAY 2018: The Israel vs Iran war in Syria war was engaged for less than 24 hours ... so, for the time being, it's over.  It's over for now because according to the IDF's BDA there are no more worthwhile Iranian military targets to strike. Who shoots at a militarily insignificant pick-up truck with a $100,000 missile? Nobody.

There are still IRGC-QF troops and proxy forces in Syria, but their foremost weapons were broken within within a very short period of time. That's a primary military objective - break the enemy's weapons so that he can no longer fight. A total of 70 IRGC-QF targets were engaged with 60 air-to-ground missiles from IAF strike aircraft, and 10 surface-to-surface artillery missiles. 70 weapons fired, 70 targets destroyed. Mission accomplished.

It matters not one iota what the weapons used were by either side, this was a one-sided fight because the LORD God and the archangel Michael are standing watch over Israel, Daniel 12:1. If the bride of Christ needs a sign pointing to its soon harpazo to be with the Lord, it is the gadowl sar Michael standing watch over Israel. Why did state-of-the-art Iranian missiles fail? Michael is present. How did Israel's arrows strike each and every Iranian and Syrian target precisely to ensure iits total destruction. Michael is present.

Have the iranian Twelver clerics learned any lesson from this engagement? Will they now withdraw their disarmed forces out of Syria? No, they haven't, and no they won't. Their supreme arrogance, lofted chins and raised heads are swimming in the decepetion of a coming al-Mahdi figure if they can just create the right amount of chaos to hasten his arrival. Yeah, and Santa Claus and the Easter Bunny too. Iranian troops will remain in Syria, they will try to re-arm themselves, but it matters not, because Michael is present and the sure prophetic written Word of God will happen as it is written.

You called it correctly and not surprised in the least. Also, prayers increasing as the Holy Spirit leads and expecting all of the foolishness of the Washington D.C. melodrama to soon come to a much needed fixing, real and lasting. How will the weak and lowly minded handle what is coming should be my greatest concern but this time, other urgent matters are far more relevant.

Sean, and friends. Just breaking news here on the other side of the world here in day light: the Irainians have attacked the Israel Golan heights area with "20 projectiles or rockets". No reports of death, injuries, or damage. (yet). Well the real war finally starts heating up......shalom. Rob.