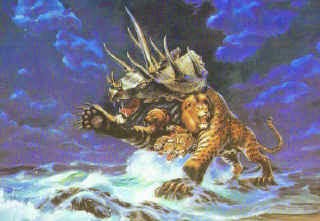 29 March 2014:  Where in the Word of God should one go to read a prophetic text, even so much as a single sentence, which is  descriptive of the concept of a revival of the Roman Empire?  I have searched all of the prophetic texts, of which the prophetically quintessential 2nd and 7th and 8th chapters of Daniel  plus the 13th chapter of The Revelation of Jesus Christ are the most vividly descriptive, and I came away with... nothing. These things and recent discussions with fellow students of Biblical eschatology once again have served to remind that what I believe is an error in hermeneutics that needs to be addressed at the minimum and corrected at some point. This is my attempt at a correction.

By the same token one can go online and search the phrase "revived Roman Empire" or some closely related phrase and find active links to 800,000 articles and literary works which discuss it at length. The vast majority of those articles and literary works support the concept, and even identify the revival of the Roman Empire as a sure sign of the arrival of the last days. And don't get me wrong here, I am as guilty as the next guy (or gal) in having previously made use of the phrase "revived Rome" when discussing things of an eschatological nature. It seems to be a natural and widely accepted practice. But is it purely Biblical? The short answer is no,  the eschatological concept of a "revived Rome" is not Biblical, it is a man-made assumption.

What was the key detail of the God-breathed interpretation given by the prophet Daniel to Babylonian king Nebuchadnezzar about the fourth kingdom represented in his vision? In Daniel 2 the interpretation regarding the first the world empire, that of Nebuchadnezzar's Babylon, in contained in all of two verses (37 and 38). The next two subsequent world empires (Medo-Persia and Greece) each share one-half of the single verse within Daniel 2:39. But then from Daniel 2:40-43 the interpretive attributes of the fourth empire are given some very good detail which denotes the importance of this empire as the world's last empire. The key God-breathed detail here is that the two legs of iron resolve themselves to a pair of feet each containing ten individual toes. Those ten toes, the essential elements or nations of  the Roman Empire, exist to this day.

In Daniel 7:7-8; 23-27 even more detail is given about the fourth beast in a God-breathed vision Daniel received just prior to the fall of Babylon to the Medo-Persian Empire. These two sets of verses in Daniel 7 say absolutely nothing about the fourth beast falling only to be revived again. This beast is continuous throughout time, from its first appearance in ancient history where it supplanted the Greek third beast to its destruction in the future by Jesus Christ at the conclusion of the 70th Week.

In Daniel 8:23-26 where the angel Gabriel is providing an even more detailed interpretation of his vision regarding of the Greek conquest of the Persian Empire, once again there is the central theme of continuity from those ancient times to the present and future times of the 70th Week. I would advise the reader to continue reading the Book of Daniel, chapters 9 through 12 as the unrelenting prophetic narrative is continued to the conclusion.

Revelation 13 is the basis of the interpretive artistic imagery seen above. It is also the God-breathed reiteration of all that was revealed to the prophet Daniel through earlier visions and Gabriel's interpretations.

As a more current benchmark reference for this subject I submit to you that Don Koenig's article "In God's eyes the Roman fourth beast still rules the world" at his ThePropheticYears.Com website fulfills this role. You can also find reference my own "Daniel 7: The Key Prophecy Confirming a Roman Antichrist." Both of these articles cover slightly different aspects of the correct Biblical instruction. However, the essential element, as Don states in his article,


"There is no other worldwide Gentile kingdom in scripture between the time of the ancient Roman Empire and the time that the latter-day prince makes a seven-year covenant with Israel at the end of the Gentile age (Dan 9:27). Therefore, in God’s eyes we must still exist in the era of the Roman fourth beast that is recorded in the book of Daniel (Dan 2:40, 7)."

The bottom line here is that as a sign that the last days have arrived one need not bother to look for a revival of something that from the Lord's perspective never ceased to exist. There is no break in the Biblical prophetic narrative where the fourth beast ceased to exist only to be revived again in the last days. You want to see the sign of a revived Rome, to see the fourth beast empire, then look outside your front door, look on a map, look no further than where you are living right now if that place is anywhere in Europe west of the Russian Federation, anywhere in the entirety of the Western Hemisphere, and also in certain nations in Africa and the Western Pacific rim. In these same locations you will also find "Tarshish and all their young lions" as declared by the Lord to the prophet Ezekiel.

So, Rome never fell, and there is no "revival of the Roman Empire" that we need to see occur prior to the 70th Week. The fourth world empire is here now and it is a global power: economically, politically and militarily. And consider this if you're interested in looking for a definitive sign of the last days. Daniel 11:21 contains a detailed precursory view of the coming Antichrist and his sudden rise to global power. That precursor was manifest in the person of Antiochus IV Epiphanes, the supreme ruler of the Hellenic (Greek) Seleucid Empire. The man who will be the Antichrist leading the already existent fourth world empire will be one of the leaders of an existing Western nation who will suddenly, and by intrigue or the aid of a few of the elite of the peer leadership around him, take full control of the already existing reigns of power of the already existing political structure, exactly as Antiochus IV Epiphanes did with the Seleucid Empire in the Daniel 11:21 template of 2,189 years ago. That man could very well be any one of the men seen standing in front of national flags and symbols in a lineup of Western leaders at any of the numerous summits or peace negotiations seen on the evening news. He just hasn't been revealed yet.

Hi Sean
1) good points. "Revived Roman empire" is not biblically or historically accurate. Never considered that before. Would the term "reunited roman empire" be an accurate description?
2) since the antichrist will be a "little horn" at first, does that mean he won't be the leader of one of the 10 nations at first, or does it simply mean the nation he leads will be insignificant at first, like Greece is?

Throughout the history of the past nearly 2,200 years there have been many "horns" -- great kings and significant rulers of the ten toes - literally-- that have popped up or appeared out of this fourth beast.

That is an aspect I will have to address, probably in an exploratory addendum to this article.

Consider them... all horns in their times who rose up...

The Emperors of the Holy Roman Empire

Frederick II and Isabella I

all the way to the current line-up of leaders that I briefly mentioned.

One who will stands out and above among them all is an absolute certainty in the very near-term.