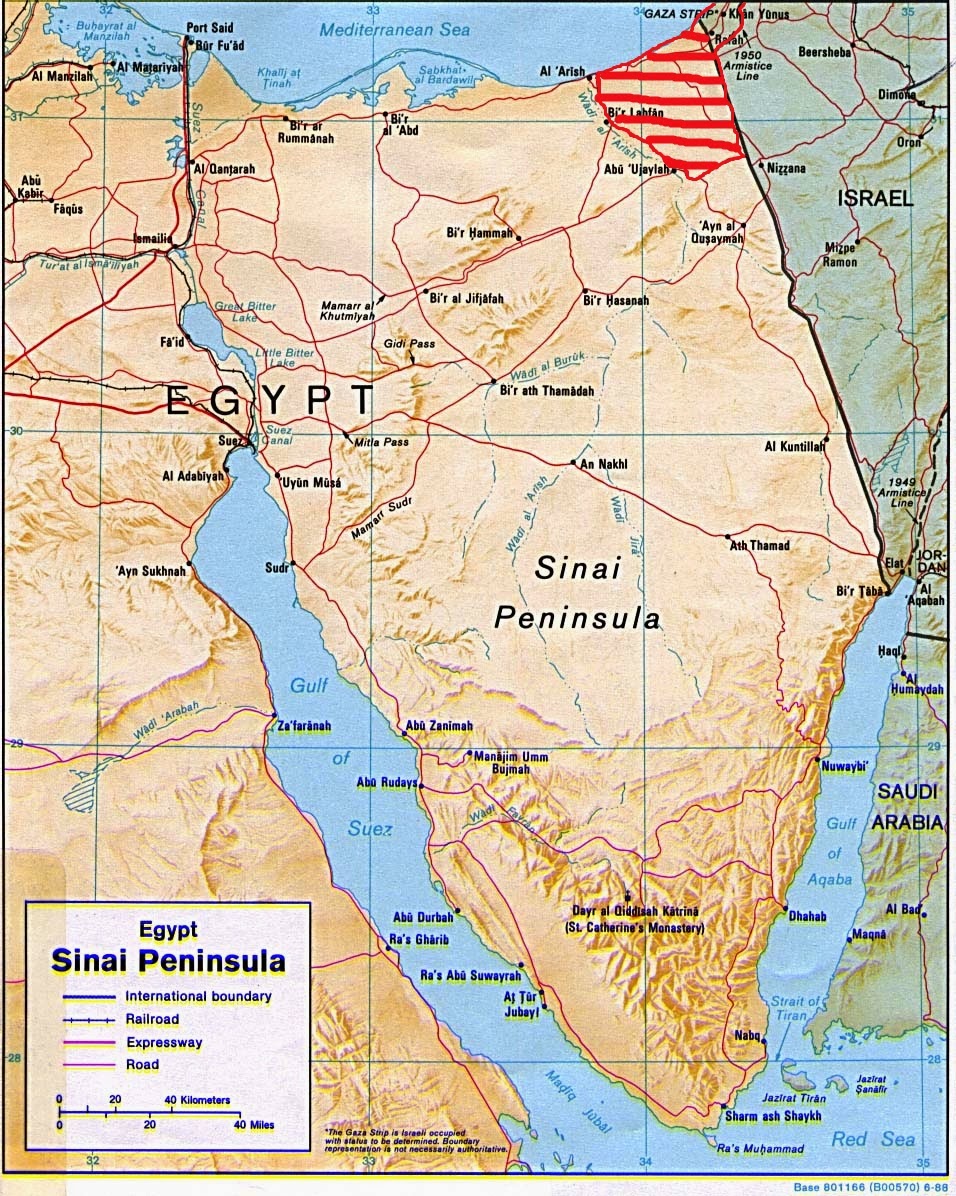 9 September 2014: The map above depicts my geographic estimation of what the 1,600 square kilometers of land Egypt has offered to the Palestinian Authority in the Sinai 10 days ago would look like on a map. Egypt offered this land to Mahmoud Abbas as more than adequate compensation for whatever land in Judea and Samaria the PA would of necessity relinquish in a comprehensive peace deal, and within which a fully sovereign State of Palestine would be created.

This proposed State of Palestine would have defensible borders controlled by Palestinians. It would have a Palestinian Army. A Navy and an Air Force. It would have airports and seaports, a national currency, as well as mineral and other resources rights under the land and sea. It would have had a seat in the United Nations as a full-fledged member of that world body and all other world bodies that it so would choose to belong to.

Of course, as expected, the Palestinians once again, and this time through PA President Mahmoud Abbas, immediately rejected the offer straight away. They don't want this land for their state; they want all of Israel as we have known all along for these past 66 years. Besides, if they took this land then the tunnels under the Egyptian border would lead to... nowhere except into the territorially expanded Gaza. What a monumental waste of HAMAS and PIJ manpower and resources that would make for!

Therefore and as so many other things have evidenced over the years the end result of this will be, as foretold in Bible prophecy, that the resolution of this 66-year old conflict will be through a great final war. And the result of that war will be that no State of Palestine will ever exist, nor will any group of people known as "Palestinians" ever exist after the war is concluded. Palestine had it's chance at statehood and threw it all away.

It may not look like it at this very moment in time, but rejection of the Egyptian offer evidences something else. It evidences that Mahmoud Abbas is absolutely not serious, and never has been, about making a state that "Palestinians" can call home, and that he is very much in lock-step with what Ayatollah Khamenei and the Shi'a Mullahs of the Islamic Republic of Iran want to accomplish - the destruction of the State of Israel. Mahmoud Abbas is their kind of jihadist and that is why Iran has been covertly delivering weapons to the PA in Judea and Samaria for use in the coming war.

Preparations for the Next War

In addition to the Iranian weapons coming into Judea and Samaria, preparations for the next war are well underway in Gaza and Lebanon.

GAZA
In Gaza they began the moment the most recent ceasefire took effect. Here are some facts I have compiled since the end of Operation Protective Edge (OPE).


1.) HAMAS still has thousands and thousands of rockets; they're building new ones as we speak. At least 1/3rd probably more of the arsenal HAMAS had in July at the start of the war remains in their arsenal. HAMAS capability to build new rockets is estimated to be roughly 40% of what it was prior to OPE.
2.) HAMAS is hastily reconstructing critical tunnel infrastructure into Israel and Egypt with North Korean and Iranian assistance. They are driving medium-sized trucks through the largest tunnels between Sinai and Gaza loaded with rocket parts, ordnance and other munitions.
3.) Israel's military forces did not degrade HAMAS nearly as much as PM Netanyahu thinks they did. The political echelon led by Netanyahu did not cry havoc and cut loose their dogs of war (IDF) as should have been the case. As a result Israel very much lost this round of the war in Gaza because of politics. When the war resumes it will not only be Gaza but also a wide expanse of Sinai that Israel will have to deal with on the southern front.

According to a PIJ/Al-Quds terrorist, the coming war against Israel was described to Al-Jazeera. Here is his statement as translated from the Arabic language video broadcast by Al-Jazeera a week ago:

"We are now in one of the tunnels of the Al-Quds Brigades [within] which work began as soon as the war on Gaza ended, and the ceasefire was declared. We have begun work and we are continuing it regardless of the threats by the Zionist enemy. We will not be hindered by the threats of the enemy, or by the ban on importing cement and other building materials. We are getting these tunnels ready for the next battle in order to launch attacks and fire mortars and artillery. These tunnels will also have other uses which we will not disclose."

From the eschatological perspective, Israel will have to endure and ultimately recover from (per Ezekiel 38/39) existential warfare on three fronts, the northern, central and southern. Israel will also have to deal with a 3rd dimensional aspect of missile fire over the front lines of ground combat. Iron Dome, Arrow and the US PAC-3 Improved Patriot ABM systems cannot and will not be able to stop all incoming rockets; widespread destruction will occur in many cities.

LEBANON and the GOLAN

According to Colonel Dan Goldfus, commander of the  IDF's 769th Hiram Infantry Brigade stationed on the Golan who was speaking to the inevitable assault upon Israel by Hezbollah in Lebanon:

"Israel’s Iron Dome rocket defense system would not be able to cope with that kind of challenge, and thus the IDF would have to “maneuver fast” and act forcefully to prevail decisively in the conflict."

Add to this a barrage of other heavyweight MRBM/LRBMs coming upon Israel from Syria and/or Iran.  Iron Dome, Arrow and the U.S. PAC-3 Patriot batteries based in Israel will be hard pressed.  Israel might be forced to call upon US/NATO Aegis-capable ABM cruisers for assistance in order to contain the conflict from going into the WMD threshold.

If we look at Isaiah 17 and Jeremiah 49 literally, this may be exactly what happens in the coming war, and which stands a very good chance of becoming a literal flood of prophetic fulfillment prior to Ezekiel 38/39. As most of you already know, this is precisely what I have been forecasting in my recent blog postings.

The IDF will maneuver fast and with extraordinary lethality in the coming war, especially in Lebanon where the IDF will completely over-run the whole of the country in subduing Hezbollah and IS/Sunni jihadists. (Joshua 13).

UPDATE 14 September 2014: Three hours ago DEBKAfile reported as Breaking News today's IDF briefing which contained a specific warning on the potential for Hezbollah incursions into northern Israel. These incursions could occur at virtually any moment from tunnels Hezbollah has constructed under the border with the same Iranian/North Korean expertise as seen in the Gaza tunnels, but which are also even more sophisticated that those in Gaza. The IDF has yet to discover even one of the tunnels Hezbollah is assessed to have constructed into northern Israel. Here's the Breaking news report:

DEBKAfile September 14, 2014, 9:57 PM (IDT)
A senior IDF officer disclosed in a briefing Sunday that there is concern that Hizballah may provoke a clash with Israel and use it to seize territory – part of an Israeli town, a mountain ridge or an IDF outpost. There is no concrete warning that Hizballah is preparing to launch a surprise attack, said the officer, but the possibility cannot be discounted that a single event with casualties could spark a series of incidents leading to a conflagration. The officer said that the IDF has prepared contingency plans to evacuate border populations at risk."

To those who would decry this news because it comes from DEBKAfile, I would caution that this IDF briefing did occur and has also been reported by The Times of Israel and the Jerusalem Post in virtually identical terminology, but in far more extensive reports, some of the details of which have already been reported in the original posting of this SITREP five days ago.

Is it true on Fox News that the United States is now bombing Syria?

Yes, it is an accurate report. I am validating details and getting the "bigger picture" into focus for the next SITREP.