Global SITREP B2-20: Rumors of War

UPDATED> 26 March 2020: There are indications that hostilities against Iran may be in advanced planning stages. These indications began to coalesce following the Iranian Shi'a militia proxy (PMF) made another attempt to attack the U.S. Embassy in Baghdad this morning with rockets. The rockets fell short, but were on a definitive trajectory to strike the Embassy.

There was a massive and apparently impromptu US and Israeli air forces exercise in southern Israel which may have just concluded. None of the U.S. aircraft landed in Israel. Most of the participating aircraft were of US and Israeli F-35 stealth family of strike aircraft. The US F-35s flew in to Israel, engaged in the exercise and departed post-exercise to several bases elsewhere in the Middle East.  Concurrent with the US/Israeli air strike exercise the U.S, and UAE conducted an exercise to seize and hold a small city. There were 4,000 troops involved. These are the indications that some type of retaliation or other military action might be in the works, corona virus or no corona virus.

And that's not all. Today Benny Gantz stunned Israelis by abandoning the Blue and White party to join Benjamin Netanyahu and Likud in forming a unity coalition and immediately thereafter forming an "emergency" unity government for the State of Israel. Upon establishment of the "emergency" unity government. Gantz immediately took his initial position as Speaker of the Knesset; he will eventually fill the role of Israel's Foreign Minister. Netanyahu will retain his position as Prime Minister until September 2021 at which time Gantz will assume the premiership of Israel. In analysis, it seems obvious that the need for Israel to establish an "emergency" unity government is related to some external, existential threat requirement. An external existential requirement such as to preempt the Iranian nuclear weapons programs would appear to fit the current situation, as well as the aforemention military activities.

In a side note, the USS Theodore Roosevelt (CVN-71) has docked in Guam in mid-deployment. The carrier had to medevac three sailors earlier this week who tested positive with COVID-19, but with only very mild symptoms. Since then several more crewmen have tested positive, also with mild symptoms. The Navy says 100% of the 5,000-strong crew will be tested. No one will be permitted to leave the pier at which the ship docked. The ship remains combat capable if called upon.

28 March 2020: Once again Eschatology Today's advanced sourcing has proven accurate as seen in news reports such as was published today in the Jerusalem Post. The report, published just over one hours ago, bears the headline "Iran and US preparing for new round of conflict in Iraq."

As noted in the original entry for this SITREP, "hostilities against Iran" means within the territory of Iran. Other indications strongly suggest the US may also intend to annihilate the IRGC-QF PMF/PMU militias known as Hashd al-Shaabi; with Katai'b Hezbollah being a principle entity, and which operates in both Iraq and Syria. It's Syria base was recently annihilated through intensive strikes from F-35 stealth aircraft. More OSINT details are to be found in the linked JPost article.

2 April 2020: Continuing where comments left off early this morning with the multiple-sources confirmation of the IAF strike on Syria's Ash-Sha'irat Air Base. It is the second such strike on this base in recent weeks. It is also where the U.S. struck almost three years ago to the day when President Trump retaliated after the Syrian chemical weapons attack on Khan Sheikhoun that originated from this air base. Khan Sheikhoun is located in the southern part of Idlib Province. For those in need of a refresher, pay a visit HERE.

So, beside the obvious chemical weapons aspect, why is Israel repeatedly striking this particular air base; what actionable intelligence does Israel have? By many accounts Israel is convinced that Syria retains a considerable CW capability, one that could prove far more deadly to far more Israelis than nCoV-2019 does. This is a CW capability that was not fully destroyed under international guarantee. No surprise here.

The particular CW holding Israel's rapt attention is the neurotoxin VX, the most potent chemical weapon on earth. It is this type of weapon when used against Israel's cities that would almost certainly result in Damascus' transformation to a heap of ruins. So, we could say that the IAF is unknowingly doing its level best to preempt the fulfillment of Isaiah 17 and Jeremiah 49:23-27. Obviously, these prophecies will be fulfilled, and Ash-Sha'irat Air Base is a likely source for that soon to arrive "day of disease and incurable pain." (Is. 17:11b NKJV)

Yesterday, President Trump once again repeated his oft-repeated warning to the Iranian regime about the resulting repercussions an attack against U.S. troops will precipitate. Paraphrase, the President said, 'We don't want conflict, so Iran should not do what (we know) they are planning to do.' Eventually the apocalyptic Twelver regime in Tehran and Qom will act stupidly, and that, as the saying goes, will be that. 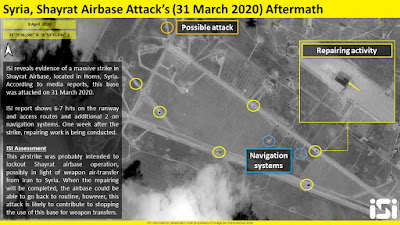 11 April 2020: The image ISI released which shows  the damage done to Sha'irat Air Base runways and navigation systems, as well as "repair activity."

UPDATE 22 April 2020: In the past week or so  Iranian naval gunboats have routinely and dangerously harassed U.S. Navy ships in the Gulf. The Iranian's have ignored all U.S. ships warnings to stand-off and stand-down from these types of harassing and aggressive actions.

A little over two hours ago President Trump relayed an order to the U.S. Navy 5th Fleet:

"I have instructed the United States Navy to shoot down and destroy any and all Iranian gunboats if they harass our ships at sea."

Thanks for the heads-up, but I was holding on this SITREP's other aspects for a few hours while waiting for a few more details before posting.

Just in: Iran has informed the Swiss Embassy in Tehran that any American military aggression against Iran will be met with a highly destructive response.

I'm wondering if we're starting to see the fulfillment of the prophecy against Elam and psalm 83. Next year is the 73rd birthday of Isreal and I'm suspected things will greatly intensify between now and Pentecost, or rosh hashanah at the latest

That's interesting Hartdawg. A few of my friends and I have been discussing something similar. And so far this year has been anything other than calm. 😀

Pentacost is May 31, Rosh Hashanah is Sep 18-20. Wouldn't you think that Passover (Apr. 8-16) would apply more as far as the Lord turning back towards Israel? Even an uptick of birth pangs? Just wondering about your thoughts.

Here are my thoughts, the prophecy about Elam, psalm 83 and Gog/magog are CLEARLY future but pre-70th week. A generation of strength is 80 years which to me tells me that the 70th week could start as early as may of next year, a little over a year from now. With all that in mind, psalm 83, the destruction of Elam (and don't forget Damascus) would all have to be fulfilled within a year (I think Gog/magog is fulfilled in very close proximity to the 70th week commencing) so unless these battles are very brief and in rapid succession, expect war to break out any time. Those are my thoughts, and correction is very openly welcome

As for the second part of your statement, I'm more inclined to think that yom kipper would apply more for the Lord turning back towards Israel....again correction is very much welcome, no requested if I'm mistaken

I'll say these most recent comments reflect the sum of the exegesis found on Eschatology Today since 2009.

We are in very close proximity to the harpazo. Any updates forthcoming?

None planned at the moment, but a Noah-like sign could take place. All that matters is we know we are close to that nanosecond twinkling of an eye.

The swirling rumors of yesterday have been confirmed, which allows this comment to be posted.

Additional details are being sought for an update to this SITREP.

Also, the IAF did strike Shayirat Air Base near Homs, Syria once again.

I just heard that on hannity...news was eclipsed by covid 19 but was wondering if you were going to cover it

A lot of what's going on is being eclipsed by enemedia transfixed by their rabid anti-Trump COVID-19 agenda. They see nothing else.

USAF just hit the 47th Regt of IRGC in Albukamal Syria. Looks like a preemptive strike.

Sean, in your estimation is COVID-19 (or as I refer to it, the CCP virus):

A) A naturally occurring plague that gained traction through unhealthy conditions in Wuhan
B) A genetically altered and experimented on version of a previous virus in Wuhan that escaped.

C) Same as B but deliberately released?

Whether A,B,or C, China should have hell to pay. In my opinion, we should default on ALL the debt they own. We should have done this just for their intellectual property theft alone (which, includes among other things, stealth technology).

I'm not mad at the Chinese people per say, but the communist party should be blacklisted permanently by all countries.

See my comment in the COVID-19 SITREP just updated.

The airbase runways were cratered such that they're unusable, probably for some time.

Israel also caught Syria's military chief out in the open greeting Hezbollah soldiers at their base in Syria. Israel has warned him, "We see you."

Just heard the news today about Pres. Trump's order concerning the Iranian gunboats and came here to check for the validity of this news, thanks for reporting on it, Sean!

Seems that something huge might come out of this if the Iranian gunboats continue the *harassing*... maybe some of the prophetic dominoes starting to fall. I guess we'll see in the not too distent future.

Sean, what are your thoughts on the current tensions between China and the USA regarding the cv-crisis and what's happening on the South-China sea?

The USA (Trump Admin.) will now focus WESTPAC Policy intently on the Republic of China (Taiwan) because of the Communist Chinese Party's treachery with its weaponized SARS-COV-2 virus.

It is highly likely this paradigm shift will result in a military clash in the South China Sea between the US plus our regional allies against Communist China.

Thank you! When I've seen the USA's Pompeo talking about the cv-crisis&China a few days ago, I thought that something must be up! I shouldn't be surprised, still, I'm amazed at the "volatieleness" of the year 2020! Closer to the tribulation period, closer to the fire so we feel its flames I guess, but one day soon the Lord will come to the rescue.

"Iran has nothing to do in Syria - we won't stop before they leave Syria."