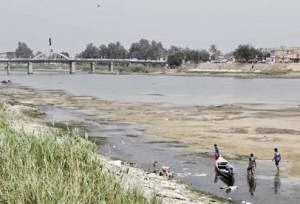 The once mighty Euphrates River coursing through Baghdad becoming a memory of yesteryear.


UPDATE 30 April 2014: Almost two weeks after the posting of this report on the military gains being made by the Sunni Islamist insurgency in Iraq, The Wall Street Journal (WSJ) published an article titled "Fledgling Iraqi Military Is Outmatched on Battlefield" which confirms in detail what had been written here previously.

A key quote from the WSJ article:

“More than two years after the last U.S. troops left Iraq, as the country prepares for its first post-occupation parliamentary elections on Wednesday, its demoralized, underequipped military is losing the fight against Islamist militants, who are better armed, better trained, and better motivated, according to Iraqi and American generals, politicians and analysts.”


The article's authors, Matt Bradley and Ali Nabhan, go on to note:

"Even the most basic maneuvers can stymie the Iraqi military. Regional commanders who lack basic knowledge of military logistics often are clumsy when transporting food for soldiers on the move, leaving many enlistees to scrounge for themselves or go hungry, say officers and observers.  Without meals, some soldiers simply leave. Though there are no official statistics, military personnel cite desertion as a persistent and growing problem, particularly for troops deployed in Anbar and other areas to the north where ISIS is active.

This is dismaying considering how much time and effort the United States spent in standing up the Iraqi security forces. By the time that U.S. troops pulled out at the end of 2011, the Iraqi security forces numbered more than 600,000 and appeared, at least on paper, to be more than capable of safeguarding their country.  Appearances, it turned out, were illusory. The Iraqi troops are perfectly capable of fighting if well-supplied, -supported, and -led. But supplying them–much less planning their operations and providing the kind of integrated intelligence and fire support they need–is beyond the rudimentary abilities of the Iraqi military. U.S. advisers filled in the gaps, but now they are gone and Iraq is spiraling downward.

This is a warning of what could happen in Afghanistan."

It is good to know that the persistent study of Bible prophecy will advance the knowledge of any watchful student at least two weeks ahead of current events reported by the secular media.

15 April 2014: The Islamist Al-Qaeda forces in Iraq have shut the water off in Baghdad by closing all of the Falluja Euphrates Dam's gates yesterday.  In current foreshadows of Revelation 9 and 16, the bottom of the Euphrates River in its course through Baghdad is showing its sandy bottom very clearly in many places.

Everything south of the Falluja Dam is going to have an unbearably miserable time as the heat of the Iraqi desert is already absolutely overwhelming without water resources. Not in recent memory has the world seen a humanitarian crisis in a major world capital as could emerge from the closing of this dam. Accompanied by the arrival of full-scale war once again in Baghdad and this place could become a literal hell on earth in a very few weeks time.

Recent parades of the Islamist forces and their warfighting hardware in Falluja and Abu Ghraib (adjacent to BIAP - Baghdad Int'l Airport) are showing they have acquired as battlefield spoils quite a number of up-armored Humvees and M-113 APCs the US left behind to re-equip the Iraqi Army after the end of Operation Iraqi Freedom (OIF) a couple of years ago. These forces are under the supreme command of the former "King of Clubs" during OIF, General Izzat Ibrahim al-Duri. 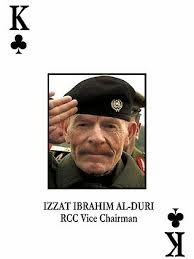 General Al-Duri was Saddam Hussein's top military aide and a key figure within Saddam's Ba'athist dictatorship in Iraq. He successfully eluded capture by US and Coalition forces for the entirety of Operation Iraqi Freedom. He knows things that the Iranian Shi'a overlords of Baghdad do not know.  The shutting off of the water supply is the first indication and Warning (I&W) that he intends to take Baghdad very soon and by all means at his disposal. Outside of direct Iranian military intervention, there is nothing much to stop him. At a minimum the near total depopulation of Baghdad is a near-term likelihood.

Global SITREP A1-14: Psalm 83 and AQ against Israel

I remember how Al-Duri was the highest ranking Saddam official to evade capture and the US boosted the reward on his head to $10 million in November 2003.

How much of the past decade do you think Al-Duri has spent in Iraq and how much in Syria or other countries?

Al-Duri, being a real military commander with great resources (loyal Saddam Fedayeen guarding him and a good portion of the Ba'athist treasury for starters) at his disposal, has spent all of the past decade on-the-move in both Syria and Iraq.

Al-Duri is a decade older now, he'll be 72 on 1 July 2014, but with the US rapid departure from Iraq (Thanks Obama!!!) he has not much to fear in his headquarters and region of his birth in the Sunni Triangle (vicinity of Tikrit, Samarra).

There is a direct connection with Psalm 83:8 here, and I am about the only person who has been calling this to attention for the past 5 years or so. The Sunni Triangle is the exact same location as the ancient heart of Assur of Psalm 83:8.

I'm looking at the main title of this post and am thinking "WOW" I don't want to jump the gun, but it looks like this could have significant prophetic implications and ramifications.

Wouldn't that be handy if some army could cross that dried river bed?

Only when the "kings of the East" approach to cross the dry bed of the Euphrates River will the prophecy in Revelation come to fulfillment. That day is firmly in the latter part of the 70th Week - some years from now.

This is a foreshadowing of that day; an indication of its nearness. A 'last days' sign of the times in which we live.

Amazing information. I had not heard about the Euphrates being shut off and I have to admit it gave me goose bumps when I first read your article, but as you say, the real show will come in the near future with the Kings of the East. Also, interesting about the Sunni Triangle and it's place in Ps. 83.

I've been quietly waiting for this to happen. It's a tactical move that the Sunni forces would be derelict not to execute given their nature for total and absolutely barbaric warfare, even against fellow Muslims of the Shi'a variety.

I also would anticipate that at some future strategic point they might introduce toxins or outright poison into the little bit of water they do allow to flow southwards.

When will the next Global SITREP be posted?

"How does Turkey stopping the flow of the Euphrates river effect the Syrian war?" (link to Daniel Pipes website redacted)

Sunni Muslim (and NATO) Turkey will not be able to maintain this blockage due to the potential enormous harm that will come to the civilian populations at all points down river, especially south of the Taqba Dam reservoir (Lake Assad).

The Book of Revelation (Chapters 9 and 16) reference to the Euphrates River being dried up to make way for the armies of the kings of the East was all but completed during the regime of Saddam Hussein in the late 1990s.

This drying up of the southern Euphrates marsh areas occurred as a part of the war Hussein waged against the Shi'a rebellion of his regime following the liberation of Kuwait in 1991. The so-called "Marsh Arabs/Marsh Shi'a" in southern Iraq were decimated by this and the land became passable for military forces in specific corridors as proven in the 2003 US invasion of Iraq from Kuwait.