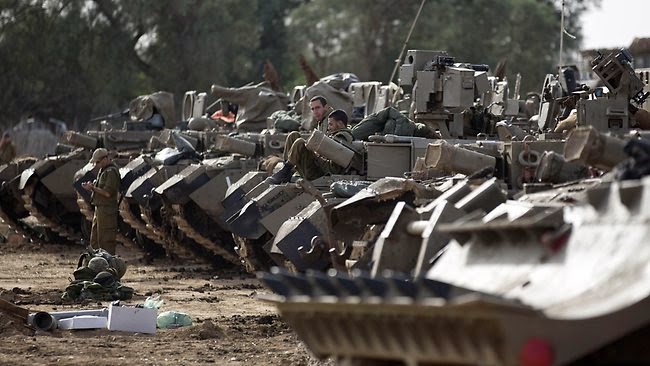 03 July 2014: Once again the summer months bring the prospect of a ground war operation in Gaza against HAMAS and other assorted spider hole Islamic terrorists. The IDF today announced a limited call-up of reservists and began the forward deployment of a significant numbers of IDF armor (MBTs and APCs) and ground-pounding boots along the Gaza border.

The inaction by Netanyahu's Cabinet over the past week or so made this reality possible. For the Netanyahu Cabinet hope springs eternal that negotiations with the present Egyptian government can bring HAMAS to their collective senses so that, and even despite the ongoing barrage of guided, unguided missile and mortar rounds into southern Israel, a ground combat operation would not be necessary.

What part of Islamic ideological supremacism and the goal of jihad does the present government of Israel fail to comprehend? Gaza will never, ever be quiet until it no longer exists.

I'm watching this develop with an eye on the fact that the summer war in 2006 was preceeded by IDF action in Gaza against HAMAS. A note from Israel says that the disk jockies on Israeli radio stations are much sharper in their deliveries than is the norm; the music they are playing is punchier as well. This reminds me of the days before US troops went over the berm an into combat in Operation Iraqi Freedom back in March of '03. It tells me that a "zero hour" is fast approaching. Go time, in other words. 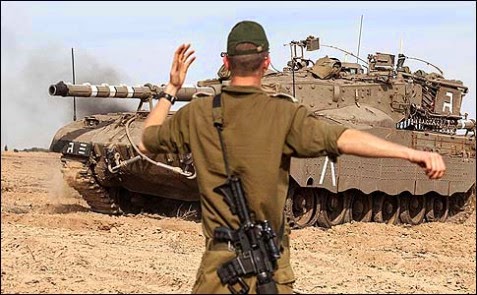 And all this occurring against the backdrop of tremendous violence going on simultaneously near Jerusalem's Old City where Israeli and Arab youth are already at war with each other. It won't be long before Molotov cocktails and flying rocks are upgraded to automatic rifle fire and grenades. And what happens on Temple Mount if it remains closed, or even if it reopens for that matter for the requisite Friday Islamic services at the start of Ramadan. We've seen this recipe before and it resulted in a completely burnt main dish from which the Arabs have still not recovered fully. The thing is, this next time there may not be any recovery possible. This one may be for keeps, but only time and the facts on the ground will determine if this is "it." 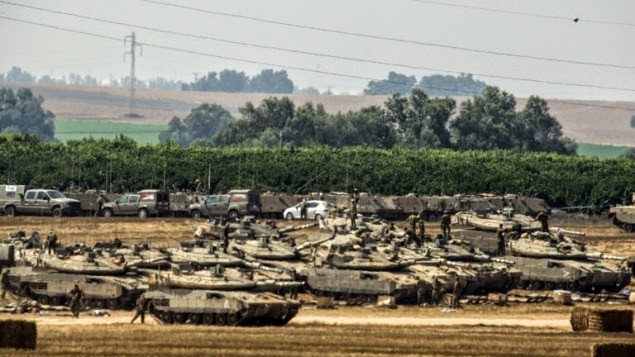 UPDATE 07 July 2014: The evidence is clear in the form of approved IDF photographic releases overnight that an overwhelming force of IDF armor and mechanized infantry of several different brigades and/or battalions are now massed up against the Gaza border. HAMAS has refused all efforts to halt its rocket and mortar fire into Israel and have obviously completely forgotten the lessons learned from Operation Pillar of Cloud (ʿAmúd ʿAnán) just 20 months ago. That operation began with the targeted killing of HAMAS military leader Ahmed Jabari. Early this morning IAF strikes in Gaza terminated at least 7 leaders of HAMAS military leadership. It does appear as though another major ground operation in Gaza is imminent in the month of July.

With all that's going on in the middle east I'm having a very hard time imagining the complete fulfillment of psalm 83 and Isaiah 17 and Jeremiah 49 being more than a year away. Don't get me wrong, it's all in God's timing but it just seems like it's all coming to a head and I don't see it playing out for an extended period of time. But I could be wrong

HD, me too. I see this as coming very soon. These developments, coupled with the inexorable slide of the US's willpower, portends 'sooner than later'. I admit, I am amazed at Netanyahu's reticence. Maybe Jarrett is telling him to hold off :(

"Zero hour" may indeed be near, but it's already been 5 long days since the Israeli teens were found murdered.

The rockets haven't stopped either.

I'm back to wondering what the heck are the Israelis waiting for?

It takes even more time as uncontrolled violence occurs throughout the homeland.

Let us not forget that when the final battles of psalm 83 erupt in full, they will be fought in Judea, Samaria, Northern Israel, Gaza, Sinai, all of eastern Jordan and in the whole of Lebanon.

Hundreds of thousands of human beings will die.

Let's not be so hasty to see this kind of war erupt even though we know it must take place.

The impatience I am seeing is not for the Harpazo and the return of our Lord...

but instead I see expressed impatience for the abject violence of unrestrained war and wholesale death, wretchedness, contagion and suffering that always accompanies war.

Are we not different than the secular Jews of DEBKA who as yet know nothing of our Lord Jesus Christ?

Instead of this, I find myself immersed in the Holy Spirit and immersed in prayer, repeating over and over again what was spoken by our Lord:

“Blessed are the poor in spirit,
For theirs is the kingdom of heaven.

Blessed are those who mourn,
For they shall be comforted.

Blessed are the meek,
For they shall inherit the earth.

Blessed are those who hunger and thirst for righteousness,
For they shall be filled.

Blessed are the merciful,
For they shall obtain mercy.

Blessed are the pure in heart,
For they shall see God.

Blessed are the peacemakers,
For they shall be called sons of God.

Blessed are those who are persecuted for righteousness’ sake,
For theirs is the kingdom of heaven."

Hi Sean, you're right, we have to be careful.

We must be impatient of seeing Jesus not of seeing more earthquakes, more wars etc.

Now, as you said, horrible events have to take place (right before and during tribulation).

Birth pangs are nasty but each of them reminds us that "time is drawing nigh".

Now, regarding the situation in Israel and around, I don't know if IDF (Israeli defense force) is going to do anytime soon. This would make sense but in this case, if is only a matter of hours before they start invading Gaza, why would an Avigdor Liberman openly attack Netanyahu for not doing enough against Hamas?

I don't know. Maybe Liberman knows IDF is about to attack very soon and wanted it to look like Netanyahu was finally forced to give the order to attack in response to Liberman's move.

Netanyahu's seems to prefer not to start a big military operation but as an analyst said on I24news this morning (http://www.i24news.tv/en/tv/live), Netanyahu can of course delay real action for sometime, but as soon as a rocket lands on a schoolbus or a hospital killing innocent israeli civilians (which I hope won't happen), he will look like he did nothing to prevent the carnage and will be compelled to react immediately.

In all cases, I feel like this war, if it actually starts, is going to be big, not just the limited operations we have seen in the last few years.

I think you're right, Foreign Minister Avigdor Liberman was playing politics in publicly chastising Bibi for the lack of action against HAMAS.

The thing is, almost no one in Israel wants Gaza to be under Israeli control again. But they all want the rockets and mortar fire to stop and never happen again.

This appears to be a Catch-22 scenario when removing Gaza from under continued Islamist dictatorial rule is not a military objective of the Israeli government; yet it is actually a very powerful indication of why Psalm 83 and the other related prophecies will come to literal fulfillment.

These verse clearly indicate that the destruction that comes upon the "Palestinians" occurs prior to the 70th Week.