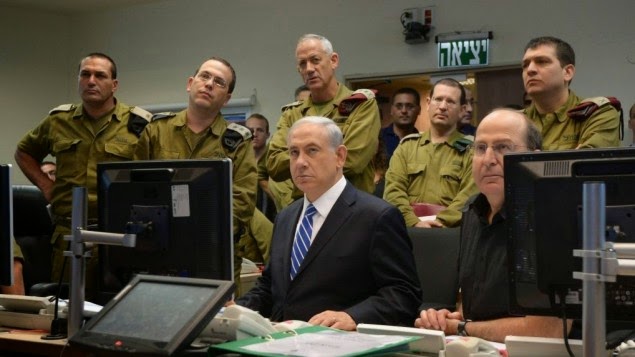 19 July 2014 - OPE Day 12:  First things first. Israeli PM Netanyahu needs to ignore anything that comes his way from the inept American CInC Barack Hussein Obama. Just plain ignore him. Period. Also ignore the rabid Turkish Islamists like PM Recep Tayyip Erodgan. Erdogan may be the leader of Turkey which remains within NATO, but he is not to be trusted as a potential ceasefire negotiating partner any farther than Bibi can spit a wad of tasteless bubble gum.

Now that that's settled we can move on and tie into where the last SITREP left off prior to the final update - the location of the bulk of HAMAS and the PIJ combatant forces the IDF must search out and dispatch to eternity.  In some instances enemy combatants are clearly using their own families as human shields. Again, to the Islamist, there is zero reverence for human life during jihad.

I am fairly certain that a very large and eminently capable IDF force entered both northern and southern Gaza and then proceeded cautiously to identify each and every warfighting tunnel the enemy could potentially exploit to suddenly pop up on a flank or in rear areas, or to avoid any dwellings or roads seeded with IED booby-traps. A minimum of 22 tunnels have been identified thus far.

Central Gaza is being held in kind of tactical limbo by an equally massive IDF force. Now it seems that these IDF tactics have successfully isolated some pockets of the enemy forces which resulted in at least one surprise firefight each in northeastern Gaza and in Khan Younis. Both contacts with the enemy concluded very well for the IDF. It looks as if the IDF is engaged in a standard tactical pincer movement, with a focus in southern Gaza to cut off potential terrorist escape routes to the open spaces of the Sinai. This tactic is reminiscent of the US battle plan of the late-General "Stormin' Norman" Schwarzkopf against Iraqi Republican Guard units in 1991's Operation Desert Storm, the objective of which was to cut the enemy from escape off and then to kill them. The plan was nearly flawless which resulted in the US political leadership erring in a decision to limit the war to exactly 100 hours. Let's hope Israel's political leadership does not make that same mistake this time.

Missiles continue to be fired by Gaza's Islamic terrorists, but the number of missiles fired at Israel's civilian population centers has been very significantly reduced in the past 24 hours. It seems that the bulk of the terrorist missile teams may have gone underground in order to extend their life expectancy. Smart move on their part.

First Update - OPE Day 12/Ground War Day 2: The number of rockets that have been fired into Israel in the past 36 hours was 136. That's an average of 4 per hour. Prior to the ground operation the average was significantly higher by a factor of two or three. One fatality has occurred in the Dimona area. Israel very intelligently went into the ground invasion phase of this war without the burden of embedded corporate media within its units. So, news reports coming out of Gaza will be a scarce commodity; media reporting coming from areas of Gaza still under HAMAS and PIJ control should be regarded as either biased or under duress. For the most part it appears as though the ignoble Islamic jihadists have gone to cowering among Gaza's captive human shield population now that a real, heavily armed and professional army is confronting them on their home turf. So goes the myth of the invincible islamic holy warrior of the false god allah.

Final Update for OPE Day 12: Day 12 saw a tunnel ambush carried out by HAMAS terrorists dressed in IDF uniforms. An Israeli officer was killed in the ambush, one of the attackers was killed in return fire and the rest were likely killed as they were attempting to escape back into their tunnel by IAF close air support. This is one tunnel that IDF HUMINT sources in Gaza did not learn of and IDF boots did not discover it in time to avert the infiltration.

20 July 2014 - First Update OPE Day 13/Ground War Day 3: The IDF has called up another 50,000 reservists just as the surge of the previous 40,000 strong IDF call up began materializing and making their presence felt in the Gaza ground operation this morning. At present it appears that Israel has committed about one-sixth of its front line and reserve forces to Operation Protective Edge. By all indications OPE Day 13 will see a near doubling of IAF air strikes and both land naval naval artillery bombardment on terrorist positions. The IDF has thus far suffered less than 10 KIA, but the same cannot be said of the terrorist enemy where their dead now number in the hundreds and counting. Soon, as the tunnel clearing operation progresses, there will be fewer and fewer places for the enemy to hide. The IDF may also soon find it is easier (far less costly with less risk) to simply burn HAMAS out of the tunnels by fire and other oxygen depleting methods. 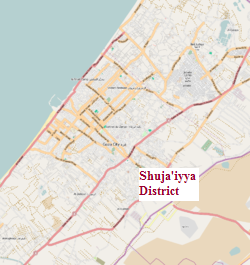 Final Update OPE Day 13:  The fiercest fighting thus far in the IDF ground operation in Gaza occurred today in the Shuja'iyya (a/k/a Sejaiya) district of eastern Gaza City. This is the high ground west of Gaza City, a north-south ridge overlooking all of the city to the Mediterranean shoreline. One might anticipate an IDF left flanking maneuver to the shore from the southern edge of the Shuja'iyya ridge in order to completely isolate and thereby cut off all the Gaza City combatants from all other jihadi forces in the urban centers further to the south. This would constitute a classic tactical envelopment of an enemy force in its primary defensive redoubt, yet with its back to the sea and no chance of escape. Typical Islamic treachery can be expected, and no ceasefire should be contemplated by IDF commanders unless it is essential to their objectives. Israel should pursue its tactical advantage with great vigor and dispatch the enemy where is now trapped. Nothing gets a jihadists attention like the spectre of death or unconditional surrender at the hands of the IDF. If Gaza City must be razed to the ground, and then some, so be it.

NOTE: The literal fulfillment of Bible prophecy has been in progress for the past 66 years. There is a very strong possibility, if not a certain probability, that we are now witnessing the commencement of the final battles between Israel and the Psalm 83 confederation. Virtually all of the major and minor Old Testament prophets have something to say to us about the conclusion of this war. How well do you know your Bible? We're about to find out.


Hi Sean,
I`m not sure how accurate this list is but it would seem the continued psalm 83 battle that Israel is fighting doesn't have the complete support of some of the peoples listed. Either something causes them to enter the fray or the G5 group will force Israel to a truce and the timing of God`s written word is still in the near future. I pray for the IDF soldiers each day.
Marana`tha!

I think it's the modern day identifications of those peoples that contains errors.

The Hagriy were not Egyptians per se; they were a people who lived east of Israel during the time of Saul and with whom the tribe of Reuben made war.

Thanks, It's difficult to weave 4000 or more years of history into our age. Thanks for your diligence on these subjects. Thankfully God has it all taken care of.