IDF armor in a 'hurry up and wait' formation near Gaza border.

15 July 2014 Operation Protective Edge - Day 8:  Now we know what has been holding a massive IDF armored invasion force up on the Gaza border. It is a Netanyahu government that is all too eager to placate, if not outright capitulate, to a leftist American presidential administration which clearly does not have Israel's best interests as its foreign policy's cutting edge.  There is no doubt that the failure to execute a Gaza ground operation as the only and truly effective means of neutering, and possibly even giving a coup d'grace to HAMAS, PIJ and other Islamic terrorists bombardment of Israeli cites and towns from Gaza, came at the hands of an inept Netanyahu government; a government which by all accounts on the evening of 14 July has acquiesced to an unenforceable cease fire agreement and agreed to a unilateral cease fire to take effect in about 5 hours from now (0900 IST) based upon terms which the Islamic aggressor has not even agreed to.
OPE Day 8 - First Update: The security cabinet accepted the Egyptian mediation offer and agreed to the ceasefire imposed only upon Israel that went into effect at 0900 this morning in Israel.  HAMAS and PIJ are enemies of the government of Egypt; they rejected the ceasefire straightaway. Not only have the terrorists rejected the ceasefire, but it never discussed directly with them by anyone in the Egyptian government. So, combat missions continued in Gaza right up to the 0900 hour and then Israel honored the ceasefire agreement with Egypt. HAMAS and the PIJ have rejected the ceasefire and continue to fire heavy barrages of their artillery rockets into Israel, as have the terrorists in Lebanon and the Syrians who lobbed rockets into Israel from the north. HAMAS also fired rockets against Eilat in southern Israel for the first time. As noted in the title of this SITREP, this is an operationally invalid ceasefire to which only Egypt and Israel have agreed, yet Egypt is not involved in the hostilities and has been, more or less, an ally to Israel since the start of the war. This ceasefire had zero chance of success.

So, at this point (0600 in the US/1300 in Israel) it appears as if OPE combat operations against the Gaza terrorists have resumed after a very brief hiatus. Israeli Prime Minister Bibi Netanyahu spoke about 20 minutes ago on the current situation saying (emphasis added):

“We accepted the Egyptian proposal in order to present an opportunity for Gaza to be disarmed of its missiles, rockets, and tunnels through political means, but if Hamas does not accept this proposed ceasefire, and this is how it appears at present, Israel will have full international legitimacy for an expanded military operation to return the necessary quiet.”

Second and CRITICAL UPDATE OPE- Day 8: The Islamic Republic of Iran, specifically the Islamic Republic Guards Corps - Qods Force (IRGC-QF)  is the driving force of the continuing rocket fire from HAMAS and PIJ in Gaza as well as the rocket fire coming out of Lebanon and Syria by the Popular Front for the Liberation of Palestine - General Command (PFLP-GC). The PFLP-GC and the PIJ are operational commands within the overall structure of the IRGC - Qods Force. This means that Iranian Supreme Leader Ayatollah Khamenei and IRGC-QF commander Brigadier General Qasem Suleimani have issued an order to maintain rocket fire against Israel irregardless of any other external considerations (such as a ceasefire). Technically speaking, it is not only HAMAS that is openly at war with Israel, but so is the Islamic Republic of Iran waging an undeclared war against Israel through their proxy forces in Gaza, Lebanon and Syria.

The links between IRGC-QF, PIJ and the PFLP-GC are very well known to both the United States, Israel and probably Egypt as well. An official Fact Sheet published by the US Department of the Treasury on October 25, 2007 makes these interconnections abundantly clear and has included updates which cite US President Barack Obama's Executive Order 13227 of April 13, 2013 in the enforcement of sanctions against the Islamic Republic of Iran. 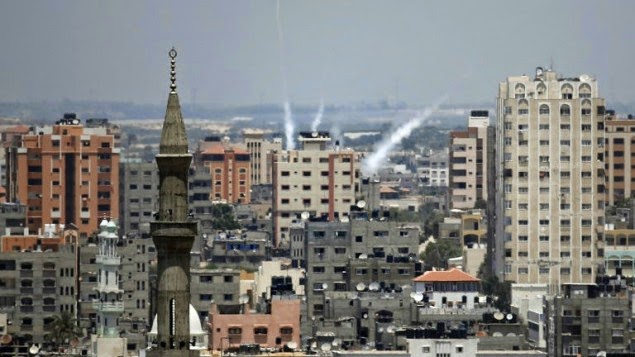 Proof positive that IDF troops will have to enter Gaza City itself during a ground invasion. Here are three rockets being launched at Israel from the crowded urban city center today, 15 July 2014. Hard and dirty fighting lay ahead for IDF troops.

Third Update - OPE Day 8: Israeli PM Bibi Netanyahu addressed the nation this evening and pretty much repeated the same things he has said all along. Nothing new here, except that he is operating in lock-step with the leftist Obama Administration.  Israeli Foreign Minister Avigdor Liberman is calling for a full-scale invasion resulting in total IDF control of Gaza. While the Israeli security cabinet as a whole democratically accepted the Egyptian ceasefire proposal, both Liberman and Naftali Bennett cast their votes against accepting it. They were the only members of the cabinet to do so. OPE Day 9 could turn out to be a turning point in this war. 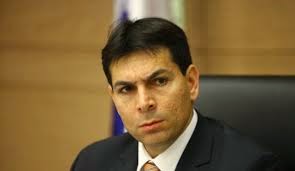 A very short time ago Israeli Prime Minister Bibi Netanyahu fired Danny Danon, the Deputy Defense Minister and a member of Netanyahu's own Likud Party. The reason for the firing is a public statement Danon made that, on the surface at least, appears to  betray the PM's public comments. Stated DDM Danny Danon, "Once again, Hamas is dictating the terms. We must not be humiliated. We must correct the mistake of accepting the ceasefire proposal made this morning and let the military do its job."  I cannot help but think that Danny Danon will become the political leader of Israel that many thought Bibi Netanyahu would become. In fact, Danny Danon strongly reminds me of the young Bibi Netanyahu of a couple of decades ago. Watch Danon, his rise in Israeli politics could become meteoric in a very short span of time. He could become Israel's "Ronald Reagan."

Empty IDF HETs (Heavy Equipment Transports) seen in the vicinity of the Gaza border on 15JUL14. Empty HETs usually means the armor they transported to this point will be advancing into combat under their own power.


Final Update - OPE Day 8: Looks like the final blitz prior to the expected IDF ground operation will commence just after 0800 tomorrow Israel time - about 5 hours from now which is 8 PM EDT/5PM PDT in the US. The IDF delivered yet another warning order to approximately 100,000 Gaza residents to evacuate their residences prior to 8 AM.
Posted by Sean Osborne at 8:53 PM

REALLY???? ARE YOU KIDDING ME??? Netanyahu does this a lot. Holds firm almost to the end then caves at the last second. A ceasefire will not stop a war, it'll just delay it and cause more casualties later. I know you'll keep us posted as always

Woke up this morning hoping it was all just a bad dream, but, no, first thing I see is that the cabinet approved the Egyptian mediation offer and agreed to a unilateral 0900 ceasefire to be imposed upon Israel.

As expected another barrage of rockets from Gaza came after Israel honored the ceasefire and halted all combat Ops of OPE.

"Hamas may say one thing in a cease fire, but like time past still for fire rockets.

Netanyahu holds the moral high ground I think and should go with the ground force to destroy the Hamas elements quickly as possible. JHMO We will see what happens."

HAMAS rejected the ceasefire from the get-go. See the critical update just posted.

Also, I deleted the link to the RT article. I will not allow any Russia Today links on this blog. The site is a Russian propaganda organ.

Not that I wanted to be right about this but just 8 days ago you accused Avigdor Liberman here of "playing politics".

Seems to me that Liberman and Naftali Bennett are the only cabinet members acting rationally right now.

Israel clearly hasn't learned anything from all their indecisive wars from the last decade.

Avigdor Liberman was playing politics with an eye to the next Israeli election, he still is. That's what politicians do.

What's the difference between Bibi and Avigdor?

Nothing except their stance within Israeli nationalism, and that was reason enough to Avigdor to break the political alliance (i.e. a political marriage of convenience) between Israel Beytenu and Likud.

The Israeli cabinet voted as a whole to approve the Egyptian cease fire proposal... they did so knowing full well that it would provide the political raison d'etre for full-scale war when the time comes.

In case anyone is wondering...

Psalm 83 is the Lord's "One State Solution."

I was wondering about RT... I happened across some youtubes of their Israel "coverage" and after about 30-45 sec in, I had a raised eyebrow. After the full 4 min video I was convinced they were operating on some sort of narcotic influence. The obvious eluded them…

Wow, I'm really sorry to see that Bibi has lost his will to defend Israel.

Bibi's speech of Friday evening was magnificent, truly inspiring. It alone should have caused the Arabs to launch the final battle of the Psalm 83 war. He said, paraphrasing here, that never, ever could Israel give full sovereignty to a "Palestine" in the West Bank; it would create dozens of Gaza's.

However, by late Sunday night there were bad juju indicators and warnings (I&W) all over the place that something else was going on behind the scenes. It turned out to be the non-starter Egyptian proposal.

If Bibi is depending on a Egyptian 'negotiation' to save Israel, Bibi has lost his nerve. He appears to not rely on God, but the politics of man. His 'fear' of putting boots on the Gaza ground indicates an internal spiritual conflict. Let's pray for Bibi's clarity and a turning to the true God - and not the world.

Not negotiation Roz, but a solid military alliance. That is what Bibi is looking for... a paradigm changing alliance between Israel and Egypt against HAMAS.

And amen to both Egypt and Israel coming to God... Bible prophecy says that will be the future outcome of this. See the new SITREP and its references.